Demirtas, 42, co-chairman of the HDP, is widely regarded as the winner of the election in early June. His charismatic demeanor was mainly due to the fact that his People's Democratic Party (HDP) received 13 percent of the popular vote, becoming the first Kurdish party to win a mandate in Turkey's parliament and deny the governing Justice and Development Party (AKP) an absolute majority. For an interview, Demirtas received SPIEGEL in his parliamentary party's new offices in Ankara. The room is large and bright and his desk is flanked by both the Turkish flag and that of his party.

SPIEGEL: Mr. Demirtas, your success two months ago gave hope to many people in- and outside of Turkey, who hailed it as a milestone for democracy. But today, the country threatens to return to civil war-like conditions. How could it come to this?

Demirtas: The AKP, the party of President Recep Tayyip Erdogan, has brought about this situation deliberately. Until the elections in June, they had ruled Turkey unilaterally for more than a decade. But they weren't able to block our ascent to power any longer, so they opted to foment chaos in the country instead. This is the only possible explanation for their war against the Kurdistan Workers' Party (PKK).

SPIEGEL: You go so far as to claim that the attack by the terrorist militia Islamic State in Suruc, in which 32 people were killed, was instigated by the government as a pretext for armed conflict. Do you have any proof?

Demirtas: If by that you mean documents that prove that the state was involved then, no, we don't. But there are clear indications. Our research suggests that this attack by IS was made possible by the AKP government, which for years tolerated the extremists' activities in Turkey.

SPIEGEL: And what about the deadly attacks against Turkish security forces by the Kurdistan Workers' Party? Don't these attacks simply confirm even more that the PKK is a terrorist organization?

Demirtas: I don't know why the PKK did that, but they shouldn't have. That's not the proper way to act. We urgently call on the PKK and the Turkish government to put down their weapons. There should be a mutual cease-fire.

SPIEGEL: The PKK executed two policemen -- and that was before the Turkish bombardment began.

Demirtas: That act was indeed a dark, dirty chapter. It was revenge for the attack in Suruc, committed by a local PKK unit. The broader organization did not claim responsibility. It seems to me that individual elements were looking to provoke the Turkish state.

SPIEGEL: Your detractors claim that HDP and PKK are affiliated with one another. Are you closely connected somehow?

Demirtas: Of course there have been meetings. We sat at the same table during the peace negotiations in the last few years. We also spoke to the PKK leader Abdullah Öcalan in his prison cell on the island of Imrali in the Sea of Marmara. His words carry great weight in his movement. For us, it's about mediating within the framework of the law. Other than that, there is no structural connection between us. We are definitely not the political arm of the PKK that our detractors accuse us of being.

SPIEGEL: Are you afraid your party will be banned, as some AKP hardliners are now demanding?

Demirtas: Although there is no independent judiciary in Turkey, I still don't believe the Constitutional Court would allow our party to be banned. Erdogan knows very well that he can't simply ban the HDP. But he does want to lift the immunity of individual members of parliament who he regards as terrorists. He wants to criminalize our party so that our public support diminishes.

SPIEGEL: On Thursday, the public prosecutor's office announced it was opening an investigation against you for inciting armed protests.

Demirtas: Erdogan cannot accept any further loss of power because of the threat of corruption investigations against him. Ever since he lost the parliamentary majority, he has felt cornered. That is why he constructs these conspiracies -- in order to stir conflict. This includes the charges against me.

Demirtas has criticized Ankara for targeting Kurds while they fight IS extremists in neighboring Syria and Iraq. He says the government contrived its current strife with the PKK to solidify its power.

SPIEGEL: Since June, no coalition government has been formed. Will there be new elections following this latest escalation?

Demirtas: There is the possibility, yes. I would say there is a 50 percent chance. Under the present circumstances, a coalition between the HDP and the AKP is unthinkable. Should it come to an election campaign, they will try and slander us by conflating us with violence and terror. But I am convinced that people will see us, as they did during the elections in June, as a chance for peace. The AKP would lose further votes in a new election, whereas we would surely do even better than the 13 percent we got last time.

SPIEGEL: What does PKK leader Öcalan have to say about the current situation?

Demirtas: I don't know. He currently faces strict isolation in his prison cell. No one has spoken to him for four months. Not his lawyer, nor his family, nor any politician.

SPIEGEL: The Turkish government says it is fighting all "terrorists" equally. Why do you view their approach primarily as a campaign against Kurds?

Demirtas: Take, for instance, the number of people arrested in raids across Turkey recently. How many members of IS were among them? A few dozen? On the other hand, more than a thousand Kurds were arrested, particularly youths, on the grounds that they were PKK supporters. These figures say it all.

SPIEGEL: Were you expecting this to happen after the election?

Demirtas: I wouldn't have put anything past Erdogan before the election, no matter how crazy. He is perfectly capable of setting the whole country on fire if it means maintaining his grip on power. We have been witnessing a worrying shift for some time now. The democracy that we so painstakingly achieved in Turkey is eroding. It is getting worse by the day.

SPIEGEL: Do you expect the country to relapse into civil war like it did in the 1980s and 1990s, when the PKK and the military fought each other and around 40,000 people died?

Demirtas: No, Turkish society would not allow that. They do not want more bloodshed. The AKP, however, would welcome such chaos in order for it to present its strength. But I think a return to civil war can be ruled out.

SPIEGEL: Maybe you should tell that to the PKK, which is partly responsible for the chaos after murdering policemen and soldiers.

Demirtas: I'm sure the PKK would accept a cease-fire that is also respected by the Turkish side. If Turkey would stop its bombardments and raids against the PKK in Turkish cities and return to peace talks, we could have a cease-fire on the same day.

SPIEGEL: The suicide bomber from Suruc was allegedly a Kurd. How many Kurds are members of the Islamic State and why?

Demirtas: From what we hear, there are more than 1,000 Kurds in IS. Affiliation with a certain ethnic group has nothing to do with a person's political views. It does not protect anyone from egregious errors. We have learned that we have to develop new programs to stop our youths from joining the extremists.

SPIEGEL: On the one hand, the US supports the Kurds in their fight against IS. On the other, the Americans are silent when Turkey bombs Kurdish positions in northern Iraq and northern Syria. Do you feel betrayed by Washington?

Demirtas: Kurds take responsibility for peace and stability in the region. Working together with the Kurds facilitates security in all of the countries involved. I criticize the US for permitting Turkish air strikes against the PKK in the Qandil Mountains in northern Iraq just so that Ankara would allow them to use the Incirlik airbase in their fight against IS. This does not add up.

SPIEGEL: Do you prefer the German position?

Demirtas: Germany commends Turkey for its action against IS, but criticizes it for disproportionate bombardments against Kurdish positions. I think German politicians have a better grasp of the situation.

SPIEGEL: Should NATO exert pressure on its ally Turkey?

Demirtas: Turkey has successfully convinced the US to agree to a protective zone in northern Syria. NATO likely supports this as well, but it's disadvantageous for the Kurds there. The government in Ankara wants to use this zone as a staging ground for action against them. If such a zone is set up, then it should be done together with Kurdish forces.

SPIEGEL: Can you understand Turkey's concern that the Kurds in Syria could seek to establish their own state?

Demirtas: The Syrian Kurds do not want a disintegration of the Syrian state. But they do desire more autonomy so that they may have more self-determination. Turkey has no reason to fear this. Why should such an entity at the border pose a threat to Turkey? Ankara should be far more concerned with improving its relations with the Kurds. Having IS on the border to Turkey is a much greater risk. 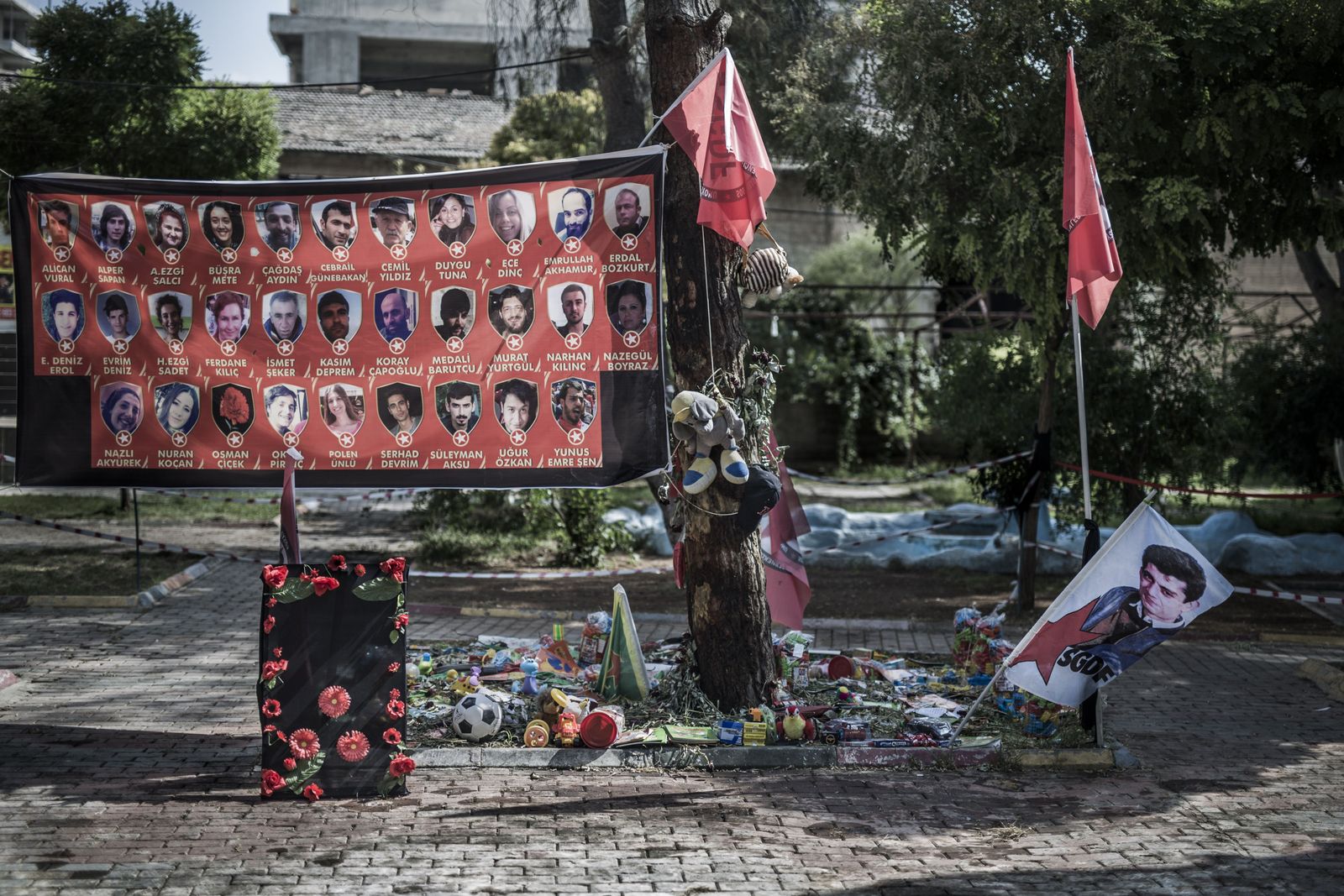 Thirty-two people were killed on July 20 when a suicide bomber attacked a group of youth activists in the Turkish town of Suruc. The bomber was reported to be an ethnic Kurd with ties to Islamic State militants. 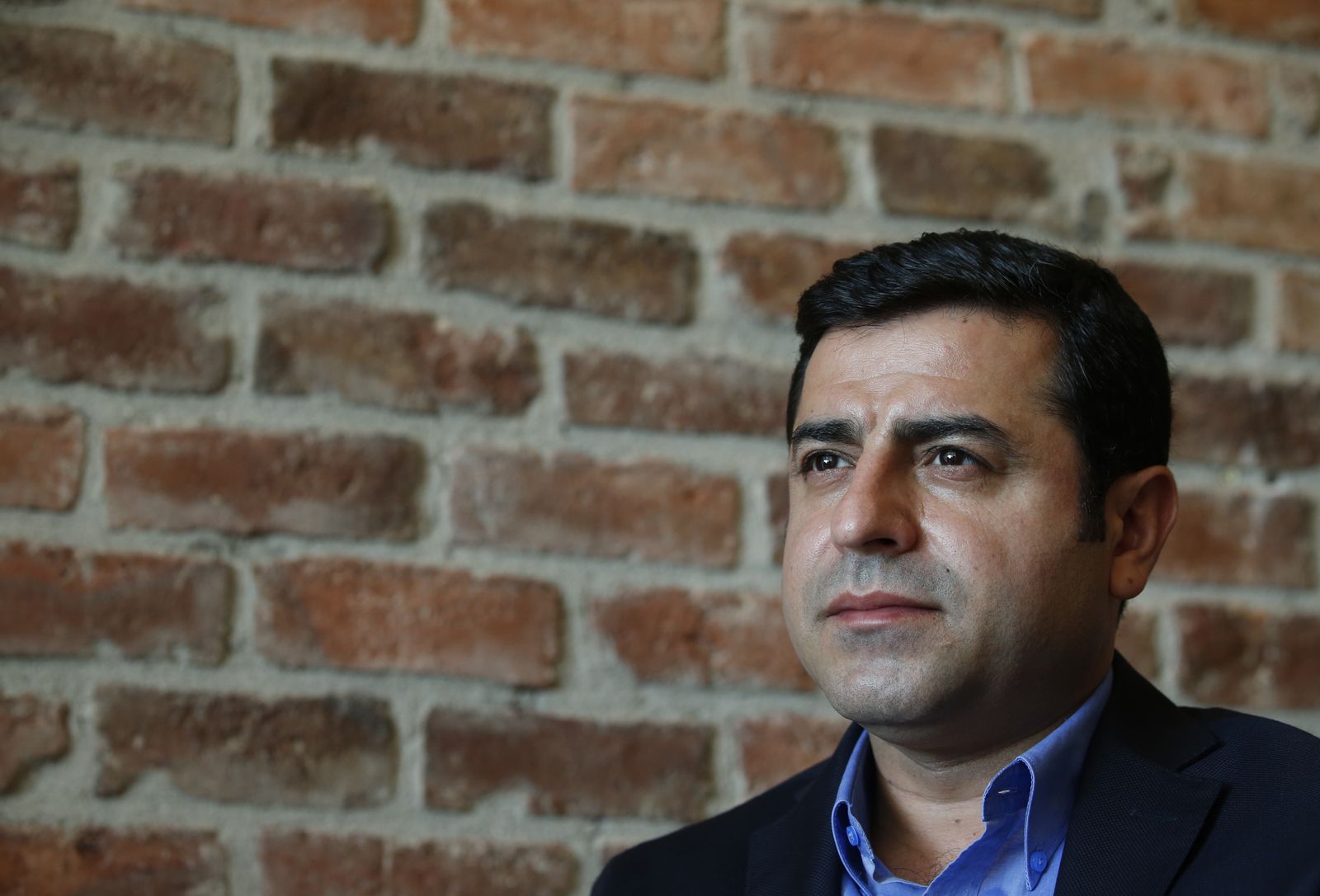 Demirtas has criticized Ankara for targeting Kurds while they fight IS extremists in neighboring Syria and Iraq. He says the government contrived its current strife with the PKK to solidify its power.