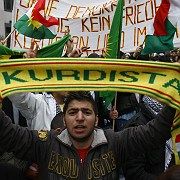 A man holds Kurdistan scarf during a demonstration in Berlin last October.

"Germany has declared war on the PKK. We can fight back. Every Kurd is a potential suicide bomber." These combative words were spoken by Abdullah Öcalan, head of the Kurdish Workers Party (PKK) back in 1996, three years after the group had been banned in Germany.

Öcalan soon watered down his statement: The PKK only wanted to fight Turks in Germany, not Germans, he said. Nevertheless the banning of the Kurdish separatist group was still interpreted as a declaration of war. It was a sign that Berlin had chosen Turkey's side in the Kurdish conflict that had been raging since the early 1980s.

The Kurdish terror campaign in Germany of the early 1990s, with its arson attacks, self-immolations, the blocking of motorways and storming of Turkish consulates may now be a thing of the bloody past. And PKK supporters in Europe may also have become a lot less militant following the arrest of Öcalan in 1999, but the movement is still kept under strict survaillance by German intelligence agencies.

With Tuesday's kidnapping of three German climbers on Mount Ararat, the Kurdish extremist military campaign is once again firmly on the political agenda in Berlin. On Thursday the PKK told the pro-Kurdish Firat news agency that as long as the German state did not end its "hostile policy against the Kurdish people and the PKK," the tourists from the state of Bavaria would not be released.

The PKK is listed as a terrorist organization by the United States and the European Union. In the past few years the German state prosecutor has filed charges against an increasing number of suspects, and many high-ranking PKK officials have been successfully prosecuted.

There is a huge support based for the PKK in Germany, which is home to an estimated 500,000 Kurds. According to a recent report from Germany's domestic intelligence agency, the Office for the Protection of the Constitution, there are around 11,500 supporters of the Kongra-Gel, the name the PKK adopted in 2003.

German intelligence agencies believe that Kongra-Gel is pursuing a double-pronged strategy. In Western Europe it concentrates on non-violent propaganda work with demonstrations, marches, culture festivals and various campaigns in order to attract new supporters or to get Kurds to demand better prison conditions for Öcalan.

Meanwhile in Turkey the armed wing of the PKK, named the People's Defense Forces (HPG) since 2000, has been fighting for an independent Kurdistan, or at the very least cultural and political autonomy for the Kurdish people in southeastern Turkey. It is this group that was responsible for the kidnapping of the three Germans this week.

Last autumn the conflict between the Kurdish separatists and the Turkish military escalated, with a number of deaths on both sides. The Turkish parliament then granted the army authorization for one year to launch military operations into northern Iraq, where many of the thousands of Kurdish guerrillas have been hiding out.

In Europe the Kongra-Gel organized huge demonstrations against the measure, during which there were clashes with Turkish nationalists. The demonstrations had originally been planned as part of a campaign that had begun last summer to bring attention to Öcalan's poor health.

While the imprisoned Öcalan is still regarded as the ideological leader of the PKK, Zübeyir Aydar, a lawyer living in Belgium, is now officially the leader of the Kongra-Gel. However, German intelligence agencies are convinced that the real leader of the movement is Murat Karayilan, the chairman of the so-called Executive Council. He is thought to be hiding in the Kandil Mountains in northern Iraq.

Last September a video message from Karayilan was shown at the International Kurdish Culture Festival in Gelsenkirchen, which was attended by around 40,000 Kurds. According to a report from German intelligence, he called on the Kurds of Europe to: "Strengthen your fight, wherever you are. Those who are in a position to do so should join the guerrillas; those who cannot, should fulfil their patriotic duty."

According to the German domestic intelligence agency, Kongra-Gel has recently reorganized its structure in Germany. Instead of being divided into three regions, northern, middle and southern Germany, there are now seven so-called "Eyalets," which each encompass 28 districts. The leaders of the units are appointed by the European PKK leadership. The authorities consider these organizational units and their officials to be acting in a conspiratorial manner. "Command and Obey" is their principle for implementing strategies. 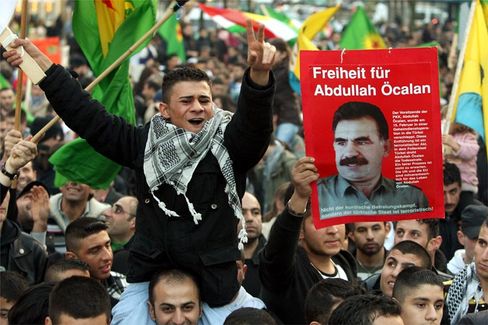 There are numerous contact points for sympathizers, with associations spread across the country, such as the "Kurdish Women's Movement in Europe" or the youth group "Komalen Civan."

According to the intelligence agencies, Kongra-Gel collects millions of euros in Germany each year for its "freedom fight." The organization usually demands that its supporters donate one month's wages per year, and those unwilling to cough up are expressly reminded that they have to pay this "tax." It is uncertain where exactly this money then goes. The lion's share is assumed to be funnelled towards the movement's European institutions and its extensive propaganda apparatus.

Kongra-Gel's main propaganda tools in Germany are thought to be the Yenir Özgür Politika newspaper -- which is largely filled with news provided by the Netherlands-based Firat new agency -- and Roj TV, a Denmark-based television station that was banned in Germany on June 19.

It is assumed that the ban on Roj TV was the immediate impetus behind this week's kidnapping. In May the station's two studios in Wuppertal and Berlin were raided and investigators seized a number of files and photographs. One of the studios was immediately closed down and then a few weeks later the station was banned, with Interior Minister Wolfgang Schäuble saying it was a mouthpiece for the PKK.

Kurds across Europe protested against the closing of the station. "This latest repressive measure is proof that German politicians are willingly meeting the repeated demands from the Turkish state to destroy the structures of the Kurdish movement," said Azadi, a legal aid organization for Kurds based in Düsseldorf.

The editor-in-chief of Roj TV in Belgium, Sores Toprak, denies that the station is a PKK mouthpiece. "Naturally we do not glamorize the armed operations, even if some people claim we do. However, there is a war in Turkey and we show these images," he told SPIEGEL ONLINE. "We address the problems in Turkey," he said, adding that the PKK and other Kurdish organizations must be given a voice.

Berlin Will 'not Be Blackmailed'

Toprak said the banning of the Roj TV was just the tip of the iceberg, accusing the German authorities of carrying out searches in private homes and Kurdish associations and fining and imprisoning Kurds.

On Thursday the PKK issued its political demands for the release of the hostages through the Firat agency. At the same time it said that the Germans were being well treated and were doing well. The guerrillas said they felt no enmity towards the German people.

The Kurdish separatists are unlikely to persuade the German government to meet their demands. "Germany does not allow itself to be blackmailed," Foreign Minister Frank-Walter Steinmeier said on Thursday.

It is unlikely the Kurdish rebels ever really thought they could force Germany to shift its policy. Indeed, the kidnappings are likely intended as a show of strength, the PKK demonstrating its capacity to take action. The Turkish military offensive has put the Kurdish militants under pressure, Heinz Kramer of the German Institute for International and Security Affairs explained to the Associated Press on Thursday.

By taking the three Germans hostages, the PKK has definitely succeeded in grabbing people's attention -- just like it did back in the 1990s when its militants repeatedly kidnapped Western tourists. In 1993 alone they took 19 tourists hostage. All were later released.

With reporting by Ferda Ataman.