Just before reaching the border, Berdi Akpolat* and his cousin ducked into a dried-out creek bed to hide. Peering over the edge, they could clearly see the spotlights mounted on Turkish vehicles as they patrolled the border. Akpolat and his cousin waited patiently for an interval between two Jeeps, and then they made a dash for the fence. After leaning a board against the razor wire, they leapt the barrier into Syria.

Once there, the pair was welcomed by a group of around 20 armed men and women. Their leader embraced Akpolat, exclaiming "welcome to Rojava" just as tanks on the Turkish side began firing. The fighters fired back, according to Akpolat, and then took him and his cousin into a house where Abdullah Öcalan, the founder of the force PKK, is said to have once spent the night.

It was well past midnight and the two men from Germany could hear the salvos and shell impacts of fighting between PKK guerilla fighters and Islamic State militants. Akpolat, 21, a Kurd from Stuttgart with a German passport, spoke with a group of armed women who told him that he was ideologically prepared to join the fight in the Kobani region. When a pick-up drove up, the women got in, Akpolat says, and they made room for him too. "Come on!" they called.

Akpolat began his journey in August. German security officials believe that he is part of a growing number of young Kurds from Germany who are making a journey for which Salafists have become notorious: They are heading to Syria to fight in the country's civil war. Once there, they join forces with the Kurdistan Workers' Party (PKK), a group banned in Germany and the European Union as a terrorist organization.

Security officials believe that some 50 men and women have made the trip, but the real number is likely much higher. In contrast to Islamic State, PKK is a disciplined organization. For decades, it has been able to operate largely out of view of German investigators, with their fighters able to leave the country unnoticed, only returning for rest and relaxation.

Getting Home In One Piece

Akpolat denies having fought in Syria, insisting that he was only there for a few days. During his stay, he saw people die, witnessed horrific wounds, and heard of atrocities and heroism. But then, he says, he left -- because his cousin had promised Akpolat's mother he would bring him home safely.

He admits to having carried a Kalashnikov while in Syria. "You can't wander around Kobani without a weapon," he says. But he claims to only have been accompanying his cousin, who smuggles PKK fighters from Turkey into the Kurdish areas of Syria -- "more than 500 of them thus far," Akpolat proudly claims. He also says that he knows plenty of people who are now fighting in Turkey, including a friend from Lake Constance and others, women among them. "There are a lot," he says.

The young man is sitting in his parents' living room, dressed entirely in black. His eyes glow when he talks about the Kurdish struggle and exhibits a precise knowledge of important dates in PKK history. His grandfather is said to have been a co-founder of the group's military wing. Next to the television is a photograph of PKK leader Abdullah Öcalan; a gold-framed rhinestone twinkles above Öcalan's graying hair. "Without the PKK, we Kurds wouldn't exist anymore," Akpolat says. "Our language, our cultural identity would be lost."

The walls of the Kurdish cultural center in the Ostend quarter of Stuttgart frequented by Akpolat are covered with oversized posters of three PKK activists murdered in Paris in 2013. A yellowing poster allegedly depicts 12 PKK fighters from the Stuttgart region who have fallen in the fight against Turkey. Two additional images -- one of a man, the other of a woman -- are displayed on a table as though it were an altar. "Those are the most recent to have fallen," Akpolat says. He points to the woman: "She took 71 Islamic State fighters with her."

Two older men, allegedly functionaries in "the movement," walk into the cultural center. When asked if young people from Germany are heading to Syria to fight for PKK, they are initially circumspect. "We don't approve when people who are too young come," one of them says. "They have to be at least 18." But, he adds: "It happens every day that men and women head off."

German security officials are aware of such activity. For years, officials say, the PKK has been trying to attract volunteers for their fight against Turkey. Specially trained recruiters mostly target young men and try to tempt them with adventure, idealism and love for the homeland.

The number of potential volunteers appears to be large. Security officials believe that PKK has some 13,000 followers in Germany. Though the organization has been banned in Germany for more than 10 years, the country continues to serve as a safe haven and as a hotbed of recruitment. Equipped with aliases and fabricated biographies, a constantly rotating group of leaders head up the four PKK regions in Germany, known as "Sahas": North, Central, South 1 and South 2. Once new recruits have been enlisted, they are sent to camps in the Netherlands or Belgium for initial ideological training. Then, they travel to Kurdish regions.

Since last fall, investigators and intelligence agencies have noted that PKK has increasingly been searching for recruits for the civil war in Syria. "It began slowly," one agent says, "but it is now gaining steam." Images from the fight for Kobani have a particularly strong effect on young people. An internal security agency report notes that new recruits receive military training in the border regions of Turkey and Iraq preparatory to joining YPG -- the Syrian branch of PKK -- in the fight in Syria.

So many Kurds have been making the trip that officials are now trying to prevent them from heading to the region if they are thought to harbor intentions of joining the armed conflict there. But a similar effort aimed at hindering Islamists from traveling to Syria has proven difficult. When it comes to Kurds, it could be almost impossible. "These people aren't as stupid as the jihadists," says one secret service agent. "You can't differentiate them from totally normal travelers. If they are active for the PKK, then only in secret." And once they have arrived in the war zone, they don't -- in contrast to Islamic State fighters -- send back photos of themselves holding up disembodied heads, nor do they appear in web videos. "We are basically groping around in the dark," a different security official admits.

The inability to track PKK fighters may have something to do with the Kurds' deftness. But it could also be a product of where police, prosecutors and intelligence agencies prefer to focus their resources. For the purposes of German security, those who are returning from the battlefield are more relevant. But whereas Kurds come back to Germany to rest, returning Salafists are considered to be potential terrorists.

When it comes to returning Kurds, the worry is more that their presence in Germany could intensify tensions with the Salafist scene. Just two weeks ago, the Federal Criminal Police Office (BKA) warned of the "strong emotionalization" of the two sides, following riots in Hamburg and Celle.

Akpolat, who has taken to making daily visits to the Kurdish vigil on Schlossplatz square in the heart of Stuttgart, agrees with that assessment. He too says that he has noticed that the atmosphere between Kurds and Salafists has steadily become more uneasy. "If it continues like this," he says, "it is only a question of time before we will see a further escalation here." 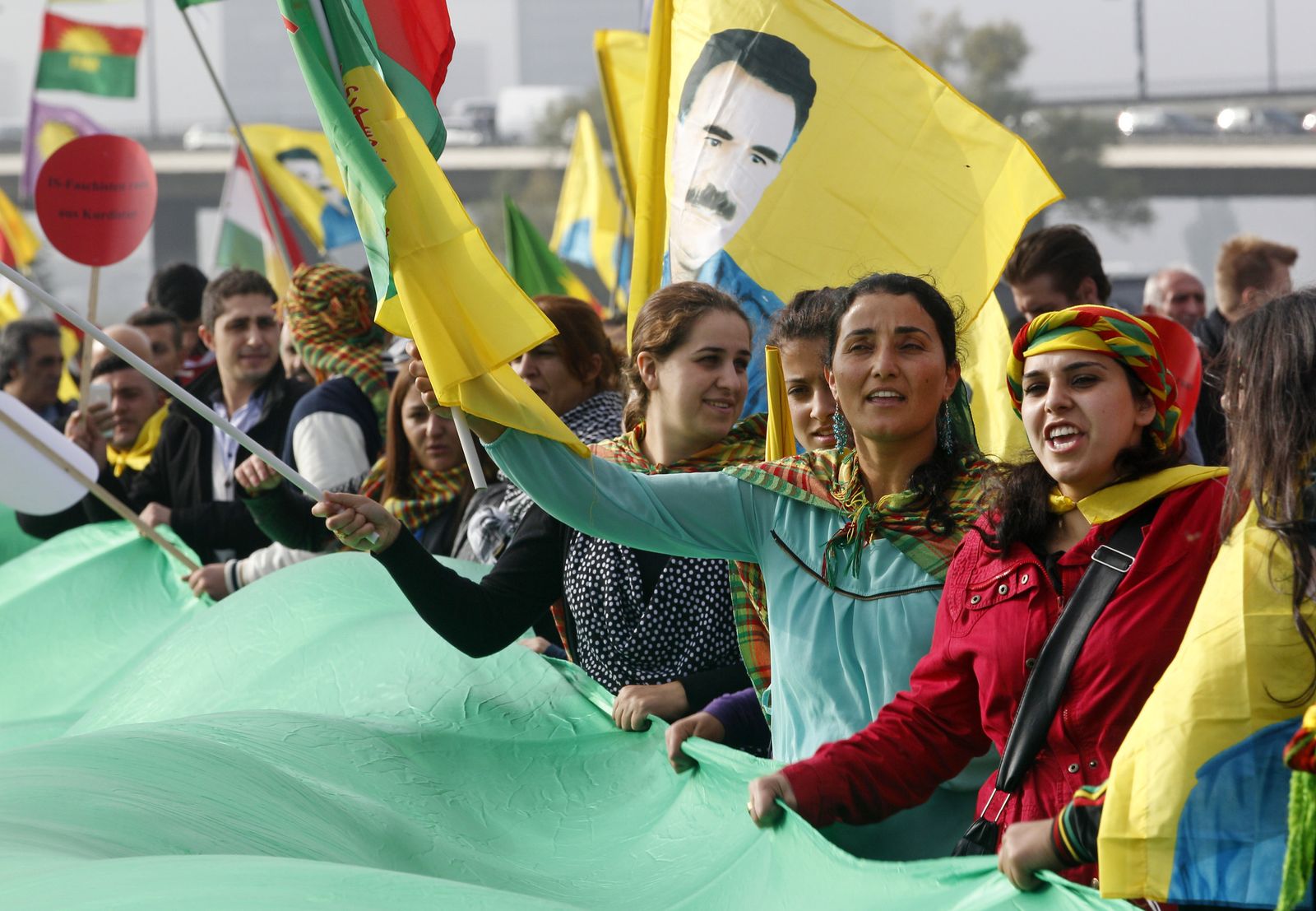 Kurds in Düsseldorf, Germany, demonstrate against Islamic State and show their support for besieged Kobani.