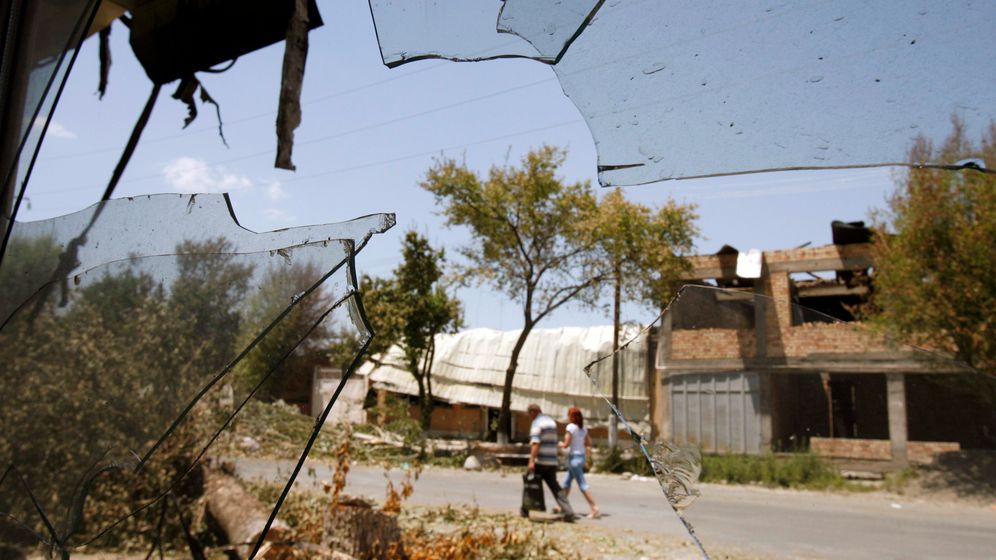 Photo Gallery: Kyrgyzstan on the Edge

Young Uzbeks, Tajiks, Turkmen and Kyrgyzs study at the Kyrgyzstan campus of the University of Central Asia, which is housed in an attractive new building with a red-tiled roof. The university brings together people from a region plagued by sharp ethnic differences, where borders sometimes bisect villages in such a way that local farmers have their houses in one country and their plots of land in another.

The university is in Tokmok, a peaceful city in northern Kyrgyzstan, near the border with Kazakhstan. Tokmok is an island of ethnic harmony in this explosive region between the Caspian Sea and the Tian Shan mountains. Russia, China and the United States have been competing for influence in the region for the last 20 years. Drug barons use the region as a supply route for Western Europe, while Islamist underground movements are seeking to establish a Taliban-style caliphate there. The region has oil, gas, gold and uranium. It also has a time bomb that has been ticking for a long time, in the form of the fertile Fergana Valley, which Soviet dictator Joseph Stalin arbitrarily carved up among Uzbeks, Kyrgyzs and Tajiks.

The university was a glimmer of hope. But now the 55,000 residents of Tokmok, particularly in the neighborhoods populated by the Uzbek minority, live in fear of the pogroms that have been shaking the country's south.

No Longer in Control

Abdimovlan Abdezov, a 51-year-old Uzbek builder and restaurant owner, has hidden his expensive German porcelain, parked his Mercedes in a guarded garage and sent his wife and children abroad. Kyrgyz neighbors shouting "Uzbeks out" burned down his restaurant in the spring. "All it takes is a single spark, and we will have a second Osh on our hands here," he says fearfully.

The central government is no longer in control of Osh, the country's second-largest city. Interim President Roza Otunbayeva protested in vain last week when mobs rampaged in the streets there. She forced her corrupt predecessor Kurmanbek Bakiyev out of office in April but has been relatively powerless since then. Instead of sending sufficient numbers of troops loyal to the government to the crisis region, she had flyers with pacifist slogans dropped over the area. It wasn't until Friday that she finally made an appearance in Osh.

By that time, according to the president's office, the violence had already claimed about 2,000 lives. Tens of thousands of Uzbeks are believed to have fled the country, most of them to Uzbekistan. Meanwhile, Kyrgyzs living in Uzbekistan are fleeing home to Kyrgyzstan, which is officially known as the Kyrgyz Republic. The violence there threatens to spread to other parts of Central Asia. In Moscow last Friday, it was revealed that the Russian Defense Ministry plans to send troops to protect key strategic facilities in the region.

Meanwhile, in Tokmok, restaurant owner Abdezov is trying to sell his battered property. He too wants to move to Uzbekistan and start a new life there, in a country that, ironically, is ruled by a dictator, President Islam Karimov, who has eliminated the opposition, imprisoned human rights activists and harassed Islamic clerics. Kyrgyzstan, sometimes dubbed the "Switzerland of Central Asia," was long viewed as a model of democracy in the region. "I don't need democracy," says Abdezov. "I want safety for my wife and children."

The chaos in Kyrgyzstan seems to prove that the autocrats in neighboring countries were right all along. For much of its history, the region has only seen stability when despots -- first Genghis Khan, then the Russian czars and finally Stalin, who subjected the region to Soviet rule -- maintained an iron grip.

Karimov, 72, was the former Communist Party leader in Uzbekistan, which with its 29 million people is Central Asia's most populous nation. In 2005, some 1,500 people were reportedly killed when his security forces massacred protestors in Andijan. Tajikistan, for its part, suffered a bloody civil war and was long controlled by lawless gangs. Today its autocratic president, Emomali Rahmon, commands the country more than he rules it. Turkmenistan, with its bizarre personality cult, is largely isolated from the outside world.

And in oil-rich Kazakhstan, the one-party parliament approved a constitutional amendment in 2007 that essentially made Nursultan Nazarbayev, 69, president for life. Last week, lawmakers granted him the title "Leader of the Nation," eliminating the need for future elections. It is now illegal to offend Nazarbayev, whose country currently holds the chair of the Organization for Security and Cooperation in Europe (OSCE). He is also immune from prosecution, which is important, because it enables him, like other Central Asian rulers and their families and clans, to line his pockets through access to natural resources and key companies.

Kyrgyzstan was long the only Central Asian country to break the mold. Although its first president, Askar Akayev, took care of his own, he permitted opposition parties. In a 2000 interview with SPIEGEL, he said that his dream was to create a modern-day Silk Road, even though he took a realistic view of the situation, saying: "If Marco Polo wanted to travel from Italy to China today, passing through our region along the way, he wouldn't stand a chance, because of all the customs officials, border guards and visa requirements now in place."

But after being in power for 14 years, Akayev was driven out of office after he and his clan fell out of favor. The West even helped to back the coup.

"His successor Bakiyev was a step backwards," says Edil Baisalov, one of the leaders of the 2005 "Tulip Revolution," as the overthrow of Akayev is known. The 32-year-old is sitting in a café in downtown Bishkek, the capital of Kyrgyzstan. He says he is disappointed that he failed twice.

Shortly after the revolution, Baisalov quarreled with Bakiyev, the new strongman, when Bakiyev curbed the press, which had helped him into power, and "robbed our little Kyrgyzstan." What upset Baisalov the most, he says, was that "the Americans said nothing when Bakiyev manipulated the election and had members of the opposition killed." But Washington needed Kyrgyzstan as a hub from which it could bring supplies into Afghanistan. Former American senators, like Bob Dole, even served on the board of a bank reportedly controlled by Bakiyev's son Maxim.

The Failure of Democracy

After Bakiyev was overthrown, Baisalov was named chief of staff to the interim president, Roza Otunbayeva, but he resigned after two months. Otunbayeva wants to replace the presidential system with a parliamentary democracy. This is a noble goal, but is it the right path for Kyrgyzstan? His former boss did nothing to safeguard her power, says Baisalov.

Central Asia faces a dilemma. Democracy doesn't seem to work there, but the region's autocratic regimes run the risk of oppressing their people for so long that they are swept out of power by popular uprisings or the increasingly popular underground Islamic movements.

At the moment, there is no solution in sight.