The Russian gas industry was celebrating on Tuesday. At a ceremony in Moscow, Gazprom board chairman Dmitry Medvedev, who is widely expected to be the next president of Russia and the German foreign minister, Frank-Walter Steinmeier, pressed a ceremonial button and the last major natural gas field in the world's most productive region went on line. A live video link showed footage from northwestern Siberia where the actual event was taking place, namely valves being opened.

The process, prosaic as it was, prompted executives in the energy industry to wax poetic. Burckhard Bergmann, the head of German energy conglomerate E.on-Ruhrgas, calls the site "Siberia's last pearl."

The new field, which is called Yuzhno-Russkoye, lies about 900 meters (2,953 feet) below the surface and contains more than 800 billion cubic meters (28.6 trillion cubic feet) of natural gas -- a number that seems inconceivably large and yet is ultimately very small. Yuzhno-Russkoye's entire reserves hardly amount to more than one year's worth of production for the entire Russian natural gas industry.

Demand for energy is growing, both domestically and abroad, and Russian energy forecasters predict Siberia will satisfy that demand. Alexander Grizenko, an advisor to the board of directors of Russian energy giant Gazprom, expects production volume to increase until 2030 when, according to his predictions, a peak level of well over 800 billion cubic meters a year will have been reached. Grizenko also emphasizes that the country will be able to maintain a very high level of production for another 30 years after that.

But Jean Laherrere, chief statistician at the Swedish-based Association for the Study of Peak Oil and Gas, paints a completely different scenario. He believes that production will peak in only eight years and decline rapidly after that. According to Laherrere's prognosis, in 2060 -- when Russian visionaries predict that production levels will still be higher than they are today -- it will in fact be close to zero.

Who is right? The answer to this question will be critical to energy supply in Europe, which already buys close to half of its natural gas from Russia today -- a share that is expected to increase now that the North Sea gas fields are almost exhausted.

Russia's future is also closely linked to the future of its gas reserves. Natural gas is the central currency of the new economic miracle that has blessed this vast country stretching from the Baltic Sea to the Pacific Ocean. Russia's gas reserves lie north of the Ural Mountains, in one of the world's most inhospitable regions. It's a flat wasteland, icebound in the winter and a swamp in the summer, where temperatures can drop to as low as -60° Celsius (-76° Fahrenheit) and climb as high as 40° Celsius (104° Fahrenheit).

Geologists estimate that about 150 million years ago, when the region was a warm ocean inlet, the bodies of dead creatures turned into dark sediments rich in organic matter. Over the course of the ensuing millions of years, the organic matter then turned into oil and natural gas reserves stored between layers of sandstone. 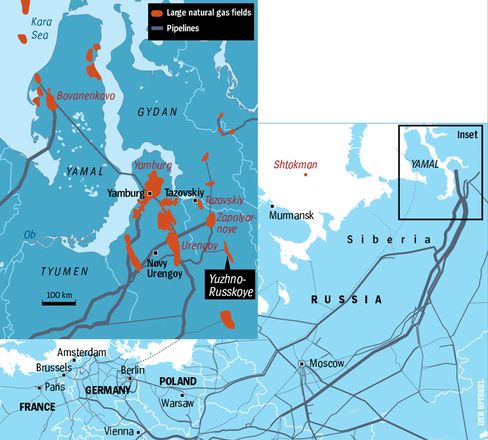 More than 50 years ago, when the first drilling teams arrived in what was then a virtually uninhabited region, the ground was so saturated with fossil fuels that some of the Soviet mining pioneers, along with their equipment, were blown up in explosions.

Sergei Chernezky, a spokesman for the Russian gas industry in the Siberian city of Yamburg, talks about one of these accidents as if it were the big bang that set off the region's energy bonanza. An explosion occurred near a town called "Little Birch Village," just as a drilling supervisor was about to enter his hut to document the fact that his team had found nothing. "All of a sudden it was clear that there was gas here," says Chernezky. "A lot of gas."

In 1966, scientists working near the Arctic Circle discovered what was then the largest-known natural gas field on earth: Urengoy. The field, 120 kilometers (75 miles) long, contained at least 10 trillion cubic meters (357 trillion cubic feet) of natural gas in the upper sediment layers alone. Father north, the Yamburg field was discovered a few years later, a hydrocarbon giant almost the size of Urengoy and containing vast reserves of methane and liquid condensed gas.

The first shipment was sent to Austria in 1968, and soon afterwards other Western countries began appearing on the Soviets' list of customers. The Soviet Union, still the West's political nemesis at the time, gradually became Europe's most important supplier of natural gas.

An energy highway unparalleled worldwide extends for 5,000 kilometers (3,108 miles) from western Siberia to European Russia and on to Western Europe. It consists of a dozen steel pipes, each up to one and a half meters (5 feet) in diameter and capable of handling an operating pressure of 70 to 90 bar. It takes about a week for a gas molecule to make the journey from Yamburg to Hamburg. Compressor stations placed at roughly 200-kilometer (124-mile) intervals maintain flow pressure.

The Limits of Production

The abundance of natural gas acts as a tremendous incentive for consumption. Russians are wasteful when it comes to natural gas, the cheapest fossil fuel and the one that is least harmful to the climate, says E.on-Ruhrgas CEO Bergmann. But Western Europeans aren't exactly parsimonious in their use of the highly refined fuel, either. Russia exports roughly one-third of its natural gas, and Germany is its biggest customer.

"The days of easy gas production are gone," says Bernhard Schmidt, the head of exploration for the Wintershall Group. A subsidiary of chemical giant BASF, Kassel-based Wintershall is the only German company currently involved in the development of Gazprom fields.

To date, gas fields in western Siberia have only been tapped to depths of little more than 1,500 meters (4,921 feet). Developing these reserves dating from the mid-Cretaceous period is relatively easy for mining experts. Schmidt, a native Austrian, calls the process "skimming the sugar off the top."

Urengoy and Yamburg were precisely the kinds of sweet finds Schmidt is referring to -- enormous and easily exploited -- and they have been drained at rates corresponding to their accessibility. Both fields are already more than halfway depleted. If they were oil reserves, production would already have been discontinued. However, because gas is lighter than petroleum, up to 80 percent of the underground treasure can be extracted. But once that point is reached, little else can be done. Siberia's largest natural gas reserves are close to this point. Satellite fields like Zapolyarnoye and Yuzhno-Russkoye are still full, but much smaller. 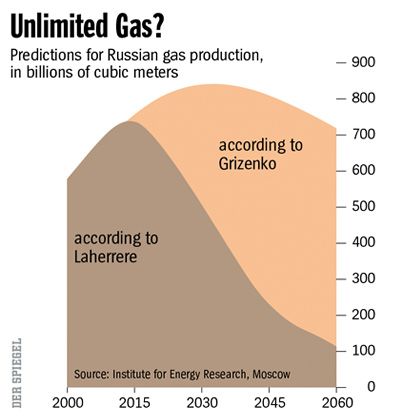 Opinions differ as to how much gas is left.

There is more gas to be found, but only at far greater depths. The gas content is especially high in Lower Cretaceous sediments in the region, but they are located at 3,500 meters (11,480 feet) beneath the Earth's surface.

Gazprom, in a joint venture with Wintershall, is currently tapping the so-called Achimov Formation in the Urengoy field. Five wells have already been drilled, and production is expected to begin next year. The German partner's experience is apparently in high demand, because gas is extremely difficult to extract at this level.

Contrary to what some people might imagine, oil and gas fields do not consist of underground caverns. The fuel is found in porous rock formations (the word petroleum is derived from the Latin terms for rock, "petra," and oil, "oleum"), and must travel through the pores into the drilling pipe. In the deep Urengoy sediments, the rock is extremely solid and fine-pored. In addition, the gas has a high content of liquid condensate that can clog the pores. To overcome these difficulties, Wintershall plans to use a high-pressure technology known as "fracturing." In this process, the rock is fractured and sand is forced into the cracks.

Despite all of these efforts, deep drilling will never be as productive as extraction from upper layers of rock. The Achimov Formation of the Urengoy field will yield 2 trillion cubic meters (71 trillion cubic feet) at best, or barely a fifth of the upper-level reserves. Clearly these sorts of finds will not be sufficient to meet Russia's production targets.

These limitations have prompted Gazprom to explore potential new reserves. On the opposite end of the Ob River Delta, northwest of the current drilling areas, lies the Yamal Peninsula. Geologists have already explored the peninsula and have discovered formations indicating the presence of fields containing more than 10 trillion cubic meters (355 trillion cubic feet) of natural gas -- potentially another Urengoy.

But the gas exploration teams are operating in highly challenging terrain. "Yamal is probably the world's most difficult extraction region," says Roland Götz, an expert on Russia at the Berlin-based German Institute for International and Security Affairs. The peninsula is covered with countless rivers and lakes, completely impassible in the summer, and its coastlines are surrounded by shifting masses of pack ice that sometimes tear meter-deep gashes into the ocean floor, making it difficult, if not impossible, to lay pipelines.

Dashed lines representing the pipeline through the Kara Sea that the Russians hope to install within the next few years -- despite doubts from within the industry -- have been shown on maps for some time. But at a meeting on July 19, 2005, the Russian union of oil and gas pipeline builders argued that there are no known "engineering solutions" for the problems associated with building the pipeline.

Another danger, according to Götz, is that the peninsula, which is barely above sea level today, could "sink during the course of gas production and become completely submerged." Gazprom's prospecting creed of preserving the untouched natural environment on the Yamal Peninsula "for future generations" would sink along with it.

But the energy giant brushes off environmental and technological concerns. Within four years, says Gazprom spokesman Sergei Kupriyanov, the company will be pumping natural gas from the Bovanenkovo field on the Yamal Peninsula and shipping it through pipelines. Two years later, the company plans to follow suit in the offshore Shtokman field in the Barents Sea northeast of Murmansk.

Gazprom is also convinced that other reserves in the ice-covered sea off Yamal can be tapped. "Gazprom has such technologies and we don't expect any surprises," Kupriyanov says tersely.

Skeptics are not welcome in the natural gas emirates along the Arctic Circle. The region's wealth of natural resources has created a standard of living well above the national average: A mechanic working in a gas field makes a better living than many a university professor in Moscow.

Within three decades, a medium-sized city developed out of nothing in this icy wasteland. Today more than 100,000 people live in Novy Urengoy, a collection of drab tower blocks. One in two residents owns a car. Supermarkets sell tropical fruit and Californian wine, and the city boasts recreation centers, cinemas and theaters -- and almost everything belongs to the benevolent Gazprom.

Officials proudly take visitors on a tour of the company-owned luxury kindergarten -- complete with a swimming pool and an assembly hall. Well-behaved children in native dress sing songs that sound disconcerting coming from the mouths of five-year-olds, songs about full tanks of gasoline, warm living rooms and the many blessings of an invisible fuel: "The cold is bitter, it bites us on the nose -- but we are not afraid, because we have natural gas."

Elsewhere, economists specializing in natural resources are already conjuring up scenarios of potential shortages. Russia expert Götz, for example, analyzed what would happen if the start of production at the Shtokman and Yamal fields was delayed by a mere five years.

The consequences of this small delay, says Götz, would already be significant. "The natural gas supply in the regions that supply Europe would stagnate at 2005 levels until 2025 at least," he says. But who will have to do without gas in a world in which everyone wants economic growth?

For Götz, the answer is obvious. "A supply bottleneck will affect Russia first," he says. "Export is much more lucrative for Gazprom."