Everything was supposedly already worked out in detail. For a week the European diplomats accredited at the United Nations in Geneva had been working on a statement about the status of human rights in Israel and the occupied Palestinian territories. Though there are currently only eight European countries represented on the UN Human Rights Council, the position was meant to speak for the entire EU.

Last week Palestinian Authority President Mahmoud Abbas appealed for recognition of an independent Palestinian state before the United Nations General Assembly in New York. Though a UN Security Council vote on the application is likely to be delayed for some time, all sides are under pressure to choose a position on the controversial issue.

Chances of a European agreement seemed good on Monday, particularly because the last version of the text had a balanced tone. Israel's blockade of the Gaza Strip was condemned, as were the most recent Palestinian terrorist attacks on the Israelis. The document also pilloried executions carried out by Hamas in the Gaza Strip and the violence of Israeli settlers against Palestinians in the West Bank.

But this turned out to be too much for some of Israel's friends in Europe. Just one hour before the official debate began in Geneva, the Netherlands representative reported that his country could not back such a resolution. In a quickly arranged emergency meeting the Dutchman whipped out his iPhone, reading off a number of required revisions, without which he said his country would unfortunately be unable to approve the document.

The corrections obviously came directly from the Dutch ambassador's boss, Foreign Minister Uri Rosenthal, known for his pro-Israeli policies. The member of the conservative People's Party for Freedom and Democracy (VVD) is himself Jewish, though not religious, and is married to an Israeli woman.

Netherlands Steps Away From EU Position

He instructed his diplomats in Geneva to strike a number of formulations from the statement, among them numerous references to a "two-state solution" -- that is, the foundation of a Palestinian state alongside Israel. The foreign minister also didn't want any mention of Israel's arrests of peacefully demonstrating human rights activists or their destruction of homes in the West Bank and East Jerusalem that forced the affected Palestinians to resettle elsewhere.

And this despite the fact that a report for the UN Human Rights Council confirms that the Israeli government has increased orders for the destruction of homes since the beginning of the year. According to the report, some 387 buildings have been destroyed since January, among them 140 residential buildings, turning out 755 Palestinians. Furthermore, more Palestinians have been displaced in the first half of 2011 than all of last year, the report adds.

The changes from The Hague were not well-received by the other European diplomats. Though some had been prepared to negotiate individual questions such as the Israeli arrests of demonstrators, the refusal to acknowledge a need for a two-state solution -- already a key European position for years -- went too far.

Most of those present at the meeting protested, at the same time expressing wonderment that some member countries agreed to the Netherlands' last-minute wishes. Germany, Italy and the Czech Republic all declared they were ready to accept the demands, in order to enable a unified European position. Meanwhile Sweden, Austria, Romania and Slovenia declared this was unacceptable. Thus just before the start of the council meeting, the EU representative leading the crisis meeting could do nothing but declare the debate had failed.

In the end, the text the group had originally agreed upon was signed by only six European countries, among them those who are currently not even on the Human Rights Council. Germany could have signed on, but preferred not to take a position. A spokesman for the German Foreign Ministry refused to comment, citing the "confidential deliberations."

It's the latest example of how EU coherence is being sacrificed to national interests. Already hardly anyone expects the EU to present a unified vote if the Palestinian status comes before the United Nations General Assembly in New York. Meanwhile the four countries currently sitting on the UN Security Council -- Britain, France, Germany and Portugal -- are also unlikely to agree on a single stance.

Thus the EU has practically no influence on either side in the Middle East conflict. What happened in the UN Human Rights Council proves that in order to prevent a unified European position, the Israelis or Palestinians just need to get one of the 27 member countries to disagree. 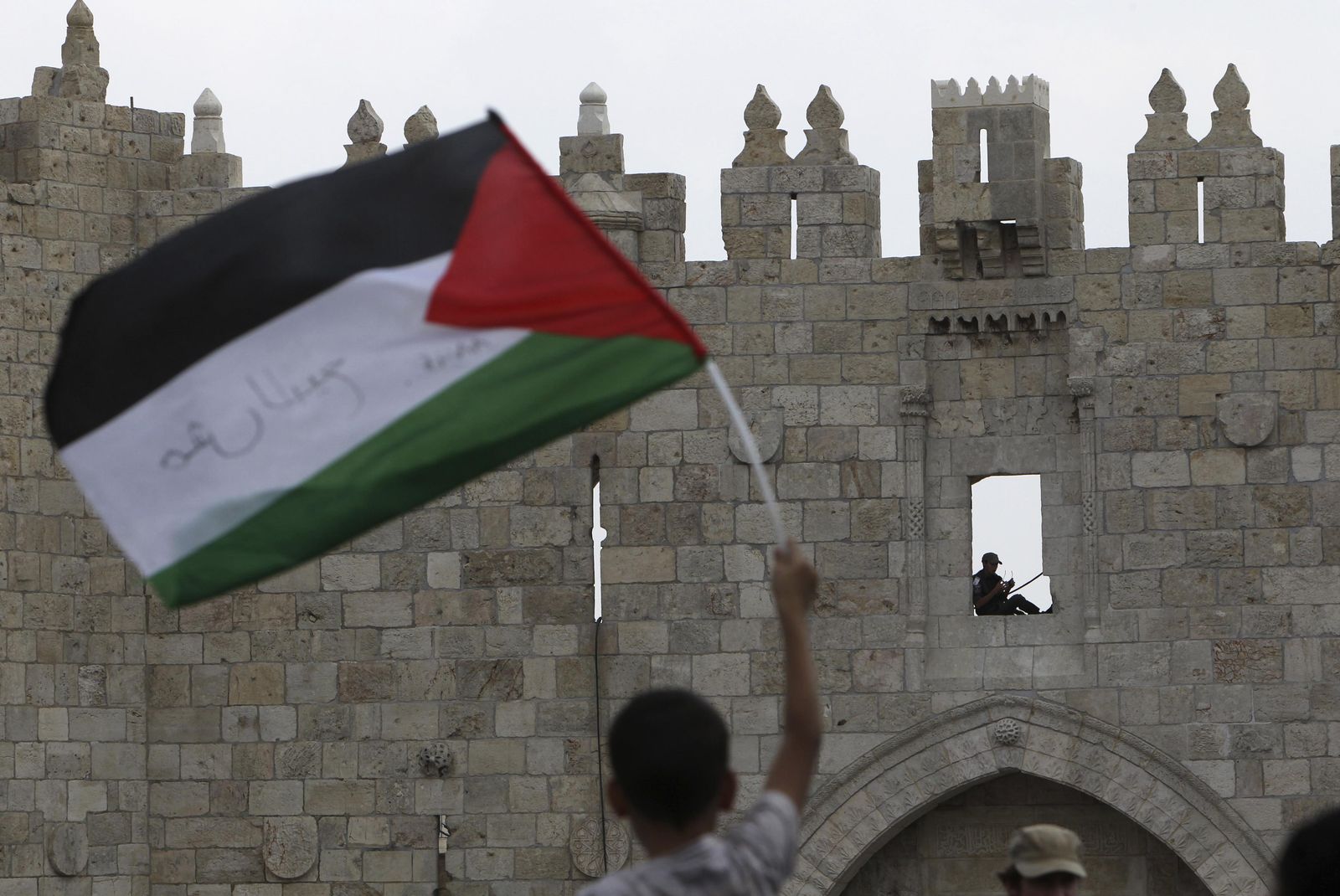 A Palestinian boy waves a flag in Jerusalem's Old City as an Israeli police officer looks on.