The dispatches from Rome were hardly complimentary. A cable from June 9, 2009 describes Italian Prime Minister Silvio Berlusconi as "feckless, vain, and ineffective as a modern European leader." The cable says he has an "overweening self-confidence" that has "made him deaf to dissenting opinion." A separate dispatch says that Berlusconi's "frequent late nights and penchant for partying hard mean that he does not get sufficient rest."

The assessments about the Italian head of government come from the more than 250,000 US diplomatic cables obtained by WikiLeaks, many of which were made publicly available on Sunday evening. Several news sources, including SPIEGEL, the New York Times, the Guardian and the Spanish daily El País, have now begun a series documenting findings from an analysis of those dispatches.

There are several world leaders who come in for particular critique, including Berlusconi. He is described as "physically and politically weak" in the dispatches which also make it clear that the US State Department under the leadership of Secretary of State Hillary Clinton was eager to find out if there was any truth to the rumors that Berlusconi and his good friend Russian Prime Minister Vladimir Putin had teamed up to pursue private business interests together, something both vehemently deny.

But according to a report in the Italian news wire ANSA on Sunday, Berlusconi wasn't particularly bothered by the reports. He "had a good laugh" about the reports, according to ANSA, citing Berlusconi confidants. Others in his government, however, weren't nearly as sanguine. Italian Foreign Minister Franco Frattini called the leaks "the 9/11 of world diplomacy."

Frattini's assessment would appear to be shared by the US. The White House condemned the release of the WikiLeaks documents soon after they were made public, saying "such disclosures put at risk our diplomats, intelligence professionals and people around the world who come to the United States for assistance in promoting democracy and open government." Even before the dispatches were made public, the US began contacting foreign governments in an effort at damage control.

WikiLeaks as a Terrorist Organization?

US Representative Peter King, a Republican from New York and the incoming chair of the House Homeland Security Committee, has requested the administration of US President Barack Obama to "determine whether WikiLeaks could be designated a foreign terrorist organization," according to the website CNET News. "WikiLeaks appears to meet the legal criteria," King wrote in a letter to Clinton, which has been seen by the website. "WikiLeaks presents a clear and present danger to the national security of the United States."

Senator Joseph Lieberman, who chairs the Senate Homeland Security Committee, has likewise called for WikiLeaks to be shut down. "By disseminating these materials, WikiLeaks is putting at risk the lives and the freedom of countless Americans and non-Americans around the world. It is an outrageous, reckless and despicable action."

Over 1,700 of the newly released documents originated in the US Embassy in Berlin, and many of them are no less complimentary of German politicians than they are of Berlusconi. German Chancellor Angela Merkel is referred to as "risk averse and rarely creative." She also, one of the Berlin dispatches makes clear, "seems uncertain at times" in her relations with Obama. German Foreign Minister Guido Westerwelle is described in a Sept. 18, 2009 cable as being short on substance, lacking in "gravitas," vain, arrogant, critical of America and "too opportunistic to be trusted as foreign minister." He is, one of the dispatches says, an "enigma" who faces a "steep learning curve" on foreign policy issues.

Bavarian Governor Horst Seehofer, head of the Christian Social Union, the sister party to Merkel's Christian Democrats, is seen as having "only shallow foreign policy expertise" and is "uninformed about basic things." A cable notes that he has "natural instincts to utter populist pronouncements."

And German Development Minister Dirk Niebel, of the business-friendly Free Democratic Party (FDP), Merkel's junior coalition partners, is called an "unlikely choice" for the post and "is not considered an expert on development assistance."

Indeed, it is the FDP party of Niebel and Foreign Minister Westerwelle which might end up having the most to fear in Germany from the WikiLeaks revelations. Cables from Berlin immediately following September 2009 parliamentary elections in Germany make it clear that US Ambassador Philip Murphy was kept well informed about ongoing negotiations to form a coalition government between Merkel's CDU and Westerwelle's FDP. The source was charged with taking notes for the FDP during the negotiations -- notes he then passed on to the Americans as discussions were continuing.

On Sunday evening, Niebel said "I consider the accusations to be downright ludicrous." Niebel was a guest on a talkshow hosted by the German public television station ARD. "I dispute that there is an informant." He also said that he didn't anticipate that US-German relations would be harmed by the publication of the dispatches. But he added that "one will have to think much harder about how open one speaks and with whom."

Former US ambassador to Germany, John Kornblum, said that "one reason why diplomats enjoy working in Germany is that Germans are very communicative. One can really find out whatever one wants. You just have to be a bit friendly."

Westerwelle also expressed doubt that there was an FDP informant who had passed along information from the coalition negotiations to the US ambassador. "I don't believe this story as it has been presented," he told reporters on Monday. "Just because it says it there doesn't mean that it is right." Westerwelle also said that he didn't consider "gossip and chit-chat" about European politicians to be particularly relevant. He said he is more concerned about potential dangers to security from the publication of the documents.

Israel Could Benefit from Leaks

Ruprecht Polenz, a member of Merkel's CDU and chair of the Foreign Affairs Committee in the German federal parliament, said, "I do think that the damage is considerable." The US, he said, must now move to reassure allies that they can be trusted. "Otherwise, partners might not continue being open with them."

But Chancellor Merkel's spokesman Steffen Seibert countered that view, saying that nothing will change in US-German relations -- the friendship is "robust and tight," he said on Monday. German Finance Minister Wolfgang Schäuble -- who, the dispatches make clear, is widely respected among US diplomats -- said the publication of the dispatches was "bad and unappetizing."

Several other countries reacted to the leaks on Monday, with Iraqi Foreign Minister Hoshyar Zebari calling them "unhelpful and untimely." The Foreign Ministry in Pakistan said in a statement that "we condemn the irresponsible disclosure of sensitive official documents." Russia has said it prefers to examine the documents before reacting.

One of the few countries which may stand to benefit from the WikiLeaks revelations appears to be Israel. Countless documents indicate that several countries in the Middle East are much more concerned about Iran obtaining nuclear weapons than they have let on in public. One dispatch reveals that Saudi Arabia had urged the US to "cut off the head of the snake" by attacking Iran, a sentiment shared by other countries in the region. The cables also reveal that North Korea may have provided Iran with missiles capable of reaching targets in Europe.

"These (disclosures) don't hurt Israel at all -- perhaps the opposite," Giora Eiland, a former national security adviser to ex-prime ministers Ariel Sharon and Ehud Olmert, told Israeli radio according to the Associated Press. "If there is something on the Iranian issue that, in my opinion, happens to help Israel, it is that these leaks show that Arab countries like Saudi Arabia are far more interested in Iran than they are in the Israeli-Palestinian conflict." 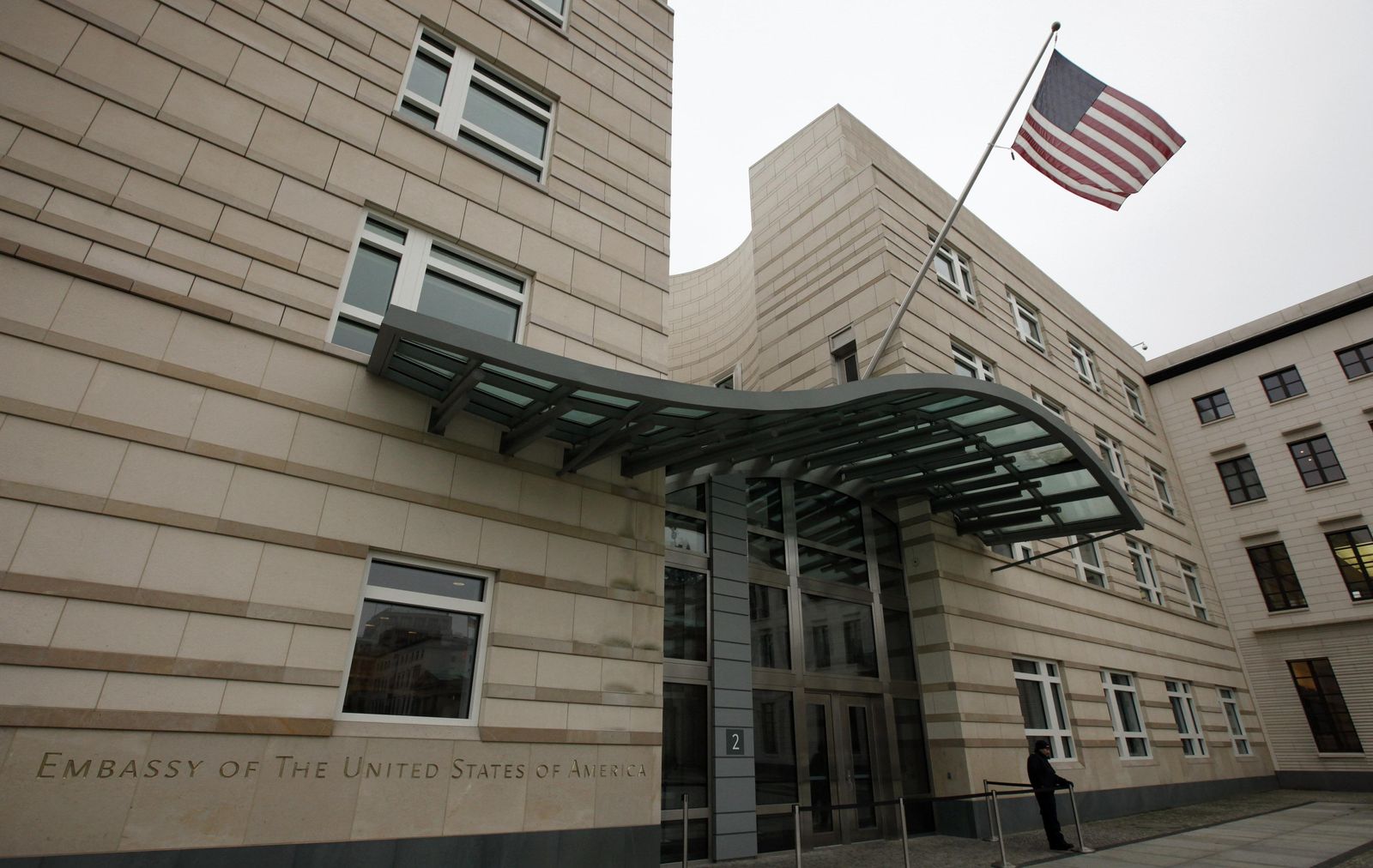 The US Embassy in Berlin. Several dispatches originating here had less than flattering things to say about German politicians.