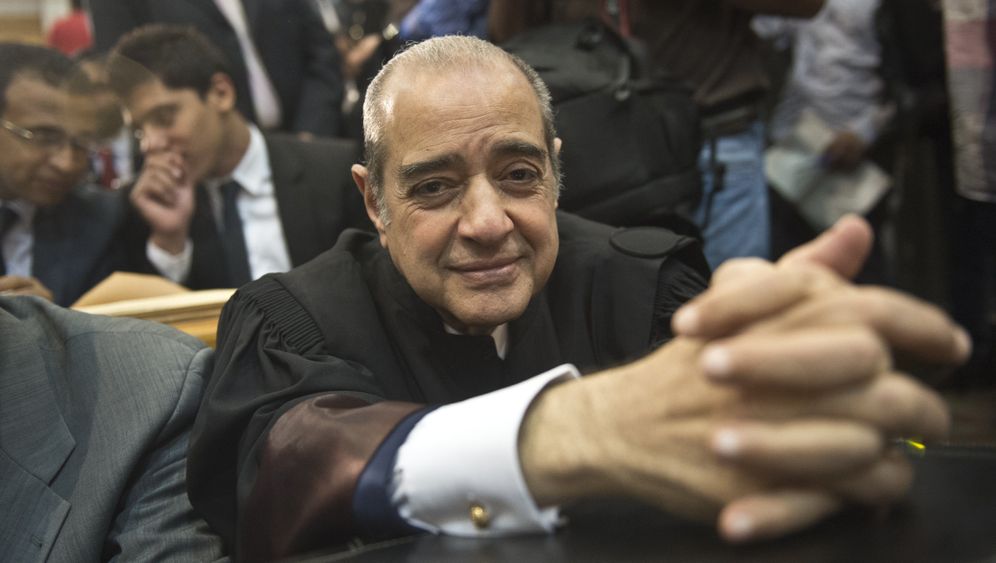 SPIEGEL: Mr. Deeb, you represent one of the most hated men in Egypt.

Deeb: Perhaps that was what (former Egyptian President) Hosni Mubarak was two-and-a-half years ago, when he was overthrown and subsequently arrested. But the mood has shifted. Many Egyptians see him with different eyes today.

SPIEGEL: Most continue to condemn Mubarak today. He is accused of being partly responsible for the deaths of hundreds of demonstrators killed in the protests against his regime. He is also accused of illegally lining his pockets and doing damage to the national treasury.

Deeb: I'm an attorney. My job is to defend the accused and help them make use of their rights. I am especially pleased to do so in the case of Hosni Mubarak, because I held him in high regard as president, but also as former President Anwar al-Sadat's vice president. He also had my great respect as commander of our air force.

SPIEGEL: Are you representing him because of personal ties?

Deeb: I didn't know him personally when he asked me to take on his case. He approached me because, as a defense attorney, I am a very well-known and successful man. I've won most of my cases. Since I've gotten to know him, I can even say that I also defend him because, on a personal level, I love him. But I'm also deeply convinced of his innocence.

SPIEGEL: Your announcement that the court should release Mubarak from custody caused a stir internationally, and the transitional government has feared new unrest as a result.

Deeb: We are dealing primarily with two groups in this country: the one group hates Mubarak, while the other one isn't familiar with the rules by which our judiciary operates. The court was merely acting in accordance with laws stating that no one can be held for more than two years pending a final verdict.

SPIEGEL: General Abdel-Fattah el-Sissi, the new strongman behind the transitional government, built his career under Mubarak. Despite this, the new power structure is supposed to have had nothing to do with the former president now being released?

Deeb: Mubarak didn't benefit from the changes. The judges' decision was not politically influenced, absolutely not. There are four different cases against Mubarak. In three of those, a decision about his release from custody had already been reached when the Muslim Brotherhood was still in power. The fourth case was addressed a few days ago. That case had been dragging on for more than two years, which meant that it was time to release him from custody.

SPIEGEL: In early June 2012, Mubarak was sentenced to life in prison for his role in the deaths of the demonstrators. You compelled the court to reopen the case. When will that begin?

Deeb: The court wants to hear the testimony and obtain the opinions of experts. Nevertheless, I believe that things will go relatively quickly now. I even hope the court will hand down a verdict in the next three months. Until then, Hosni Mubarak is a free man, although he isn't permitted to leave the country.

SPIEGEL: This important case could be over before the end of the year?

Deeb: Yes, I believe that the judges will hear the case expeditiously and quickly reach a verdict. And I assume they will acquit Hosni Mubarak. If not, he will of course be sent to prison again. But we can also file an appeal. In the end, he will be a free man.

SPIEGEL: There are still other cases pending. They involve the acceptance of gifts worth close to €2 million ($2.6 million), charges of illegal enrichment through the sale of public properties and of using the presidential budget to pay for private property construction costs.

Deeb: Those trials will also begin soon, and they too will end in acquittal.

SPIEGEL: The fact is that Mubarak is in a military hospital in Cairo, where he is under house arrest.

Deeb: It was his choice to be admitted there, because of his health. At the hospital, he receives the medical care he needs. He is 85. He is under house arrest on the orders of the prime minister, who has invoked a state of emergency for the country. The house arrest will end when the situation normalizes.

SPIEGEL: Do you seriously believe Mubarak will gaze out at the Red Sea from his villa in Sharm el-Sheikh again?

Deeb: Not now, but certainly later. Why not? He can also return to his house here in Cairo. Of course, he will have to appear in court on the days of the trial, but aside from that, he can choose to stay wherever he wishes within the country. He has chosen the military hospital for now. He occupies three rooms, reads newspapers and receives visits from his family.

SPIEGEL: How is his frame of mind?

Deeb: I just visited him. He is in good spirits, although he is suffering from a few illnesses. He walks very slowly, because he has pain in his knees. He sits around a lot. He had major operations -- his heart, the cancer. He may think he made political mistakes. But he is convinced he didn't commit any crimes.