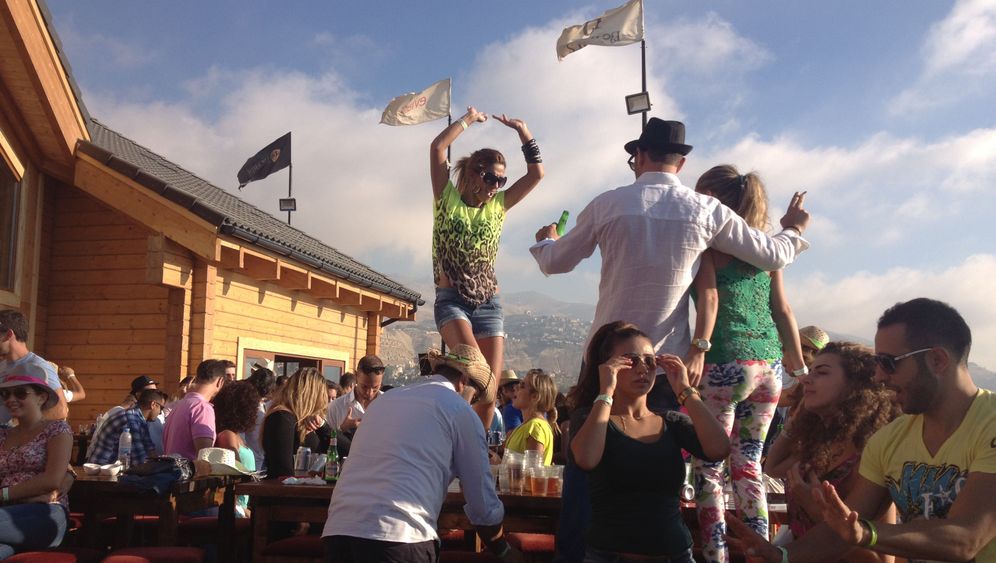 Take the winding road up the mountains to the idyllic village of Faraya, about 40 kilometers (25 miles) northeast of Lebanon's capital Beirut, and you'll soon hear some sounds you may not have expected.

Giant Hollywood-style white lettering identifies the 1,625-meter-high (5,331-foot-high) village to visitors. And just underneath the sign lies a mountain lodge with a sweeping sun-bathed terrace, where hundreds of Lebanese young people dance boisterously to the summer's club hits.

Empty beer bottles and plastic cups litter the table tops. The partiers wear hot pants, trucker hats and aviators -- youths of all confessions united by their belief in good music and drinks. Some stand on the benches, others climb up on the tables. It's not quite 4 p.m.

Lebanon is considered the party capital of the Middle East. Yet in the shadows of the civil war in Syria, things have quieted down. Violence even within the country's borders has increased, along with fear.

Many bars in Beirut remain eerily empty on weekends. Every day the Lebanese army receives around a thousand phone calls from concerned citizens reporting something suspicious. Many fear repeats of recent car bombings in July and August, and are cautiously avoiding the cities. Instead they head for the mountains, where a feeling of isolated safety prevails.

The population of the mountains surrounding Faraya is predominantly Chrisitian, and violence in Lebanon tends to occur where differing faiths and sects are confronted with one another. The mountains are also off the radar of Israel. Even in 2006 -- as Israel waged a brief but deadly war against the militant group Hezbollah in southern Lebanon and Jerusalem bombed the Beirut airport -- the parties continued in the mountains of Faraya.

"When Beirut is burning, the people come here," says 49-year-old Ricky Hmouda, owner of the moutain chalet. He says he's seen a record number of visitors in the past few weeks -- some 900 every Sunday in September, twice the regular number.

Ricky has been a mainstay of the Lebanese nightlife for decades, first as a DJ and later as a nightclub owner. When he first started his Sunday mountain parties a few years ago, he saw that there was a gaping hole in the entertainment market. He credits his wife, a successful businesswoman, with pulling the strings of the operation behind the scenes. She likes to stop by on Sundays for a few hours.

Ricky makes his way through the partygoers, tirelessly shaking their hands and posing for photos with them. He's a born entertainer. Every Sunday he wears a t-shirt with a new catchphrase written on it -- a tradition that's turned into a sort of trademark. Today's reads: "Boobies make me smile."

The visitors are mostly in their early 20s. They pay $66 (€49) to party with Ricky, and for access to the all-you-can-eat buffet and open bar full of top-shelf liquor. They come from all over the country, and some are dual nationals who spend only the summers in Lebanon. The most popular drinks at the moment? "Rosé and white wine. It's summer!" Ricky says, as the crowd sings along to Ke$ha's "Die Young."

Mona Harbali arrived with eight friends from Sidon in southern Lebanon to celebrate her 22nd birthday. Her friends briefly wondered whether the drive into the mountains was safe. "I am a little worried," Harbali says. "But we live in Lebanon. You get used to it, life goes on."

But would she be driving cross country at night? "We're with Ricky from 2 to 6 p.m.," she says. That's the latest most of the partiers head home. The bar closes at 5, and by sundown around 7, peace and quiet returns to Faraya.

Ricky has thought ahead when it comes to the the security situation in the region. He says he's prepared for the outbreak of war in Lebanon, or the consequences of a potential US attack on Syria. "We have enough to eat and drink," Ricky says confidently. There's enough alcohol bunkered away to fuel four weeks of parties without driving to the next town for supplies.