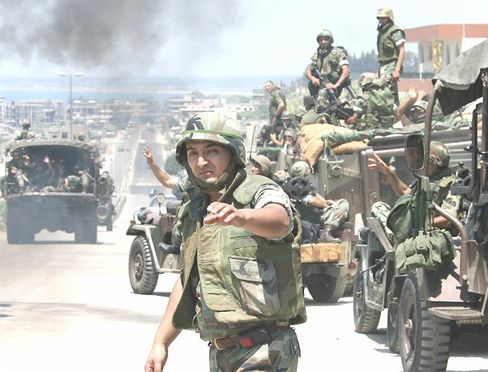 Lebanese soldiers: "They're cleaning up the terrorists."

The mood is festive on Tall al-Muhammara, a hill in northern Lebanon. The war tourists have arrived. Members of the Rashidi family from Tripoli spread out their picnic blankets and sit down for a lunch of chicken sandwiches and Pepsi-Cola. The Mediterranean glistens on the horizon, and artillery fire booms in the distance. As yet another plume of smoke rises above a gray strip of houses along the coast -- Nahr al-Barid, a Palestinian refugee camp -- the Rashidis applaud.

"That was our army," says Ali, the father. "We can really be proud of them, they're cleaning up the terrorists." His nephew Mohammed, a soldier who would normally be standing on a hill manning a howitzer and firing into the camp, has the day off. He too seems to enjoy this gloomy piece of theater. Not even his four-year-old son Mustafa flinches at the sound of the dull explosions.

"We have no problem with the Palestinians, we even pity them. But we do have a problem with the Syrians," says Ali al-Rashidi, a Sunni building contractor. "We believe that they control the terrorists." It's no secret, he adds, that Syria, when it was still the occupying power in Lebanon, developed a group loyal to Damascus in the Palestinian camps, and that Syria is now exerting influence on this group in an effort to destabilize its small neighbor.

These days there are many rumors circulating in Lebanon over who could be backing the radical Islamic fighters of the insurgent group known as Fatah Islam, which has been holed up in the Palestinian camp for weeks, exchanging fire with the Lebanese army. Damascus is behind the group, says the government of Prime Minister Fuad Siniora. Terrorism experts are convinced it's al-Qaida. The pro-Syrian forces in Lebanon claim that the Lebanese government or even the USA are behind it. The West, they argue, would have an interest in establishing a Sunni counterweight to offset the Shiite Hezbollah militia.

Crippled by a political stalemate, each party in Beirut has a different take on the conflict. One thing is certain though: The new wave of violence, which at times threatened to spread to other Palestinian refugee camps, has Lebanon in a stranglehold once again. At least 114 people and almost 50 soldiers have already lost their lives -- an unusually large number of casualties, even by Lebanese standards.

It all began with a bank robbery in the northern Lebanese city of Tripoli. After the robbery, police special forces stormed an apartment occupied by members of Fatah Islam, where they suspected the stolen money was hidden. Little was known about the group until then, except that it had split off from Fatah al-Intifada, a pro-Syrian Palestinian organization, in 2006 and was ideologically allied with al-Qaida. Saddam al-Hajdib, the brother of Youssef al-Hajdib, known in Germany as the "suitcase bomber" for his failed terror attack on German trains near Cologne on July 31, 2006, was said to have been a member of the radical organization.

Fatah Islam retaliated for the police raid on May 20, when its snipers targeted Lebanese security forces. The army brought in tanks, and only days later could civilians be evacuated from the Palestinian camp. The incident turned out to be a trial by fire for the military. For the first time since the end of the Lebanese civil war in 1990 and the withdrawal of Syrian occupation forces in 2005, the poorly equipped Lebanese army was responsible for a combat mission. In addition, the army had agreed, after the war with Israel in 2006, to transfer soldiers to the south -- which had until then been Hezbollah territory.

The soldiers have done outstanding work so far, says Nisar Abd al-Kadir, a retired general in Beirut. "The army could have taken out the camp right away," he says, "but it had to keep the number of Palestinian casualties as low as possible." Under a 1969 agreement, soldiers are barred from entering any of the country's 14 Palestinian camps. Instead, they bombarded the Nahr al-Barid camp with artillery fire from their positions outside the camp. The army has already won tremendous respect through its able handling of the situation, says Abd al-Kadir, and has done so with all religious and political groups. "It is the winner of this conflict," he adds.

Salah Akl, a Palestinian dentist who is among the 6,000 civilians still living in Nahr al-Barid -- in a section that is not under fire from the army -- speaks on behalf of the losers. According to Akl, if nothing changes for the Palestinians after the conflict, and if they remain second-class citizens in Lebanon -- "without work permits, without rights, without a future" -- radical groups will be guaranteed a steady stream of recruits from among the camps' angry young men without prospects.

Akl, 32, had his own clinic inside the camp. It was destroyed by a Fatah-Islam bomb, and now Akl lives outside the camp. When he is allowed to enter the camp at certain times, he hurries to the safe section of Nahr el-Barid to help care for the wounded. "The frustration inside the camp is indescribable. It's like a thousand pinpricks," he says.

Up above the camp, on the windy Muhammara Hill, the Rashidi family is packing up its food. Mohammed, the soldier, has to report back to duty the next morning. "There is still a lot to do," he says.