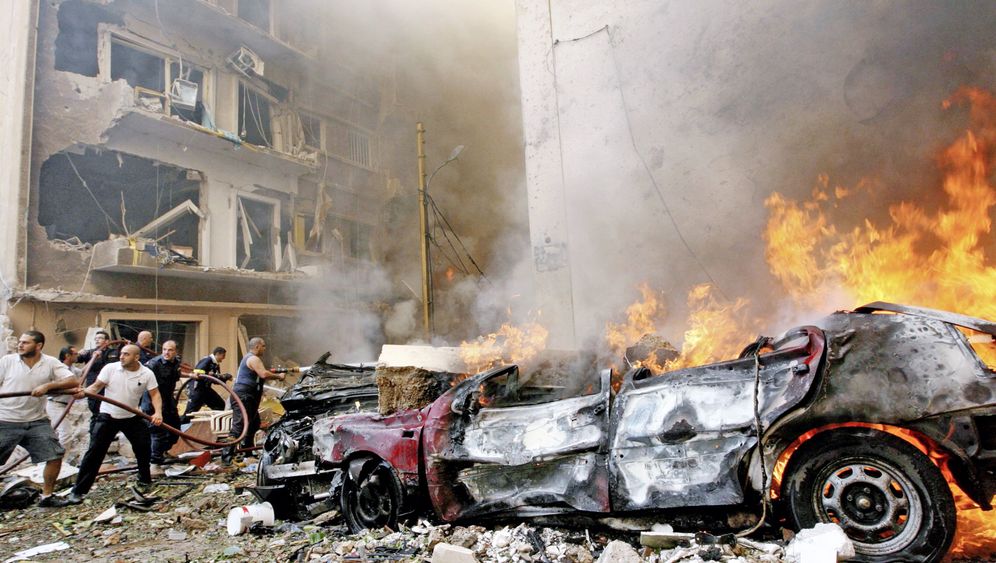 Photo Gallery: Two Murders and a Link to Syria

It's a story of personal oaths of allegiance and clan loyalties, a story of war, betrayal and deceit, a story that could only be written about the Middle East. At the story's center stand four men and two murders.

Rafik Hariri, a business tycoon worth billions, helped rebuild Lebanon after its bloody 15-year civil war. He was an important political leader of the country's Sunnis and Lebanon's prime minister for roughly a decade. In October 2004, he resigned to protest the string-pulling exerted by neighboring Syria and Hezbollah, the Lebanon-based Shiite militia bankrolled by Damascus. A few months later, on Valentine's Day 2005, Hariri would die in a massive roadside bombing attack.

Saad Hariri, Rafik's 42-year-old son and political heir, swore that he would get to the bottom of the murder and even availed himself of foreign assistance to do so. In 2007, the United Nations decided to set up a Special Tribunal for Lebanon (STL). The tribunal has been operating from its headquarters near The Hague, in the Netherlands, since the spring of 2009. The younger Hariri came to be known as one of the leaders of the Cedar Revolution, which succeeded in driving almost all Syrian troops out of the country. Saad Hariri would serve as Lebanon's prime minister from 2009 until 2011, when his coalition government collapsed. These days, he leads his opposition movement in exile from Paris.

Hassan Nasrallah, the 52-year-old head of Hezbollah, has oscillated between suppressed and open hostility with the Hariris. In addition to overseeing a militia that is stronger than Lebanon's army, Nasrallah commands a powerful political organization. At the moment, his party essentially controls the government in Beirut, and he views himself as the only force fighting against "Zionist occupiers." He also sees the STL as little more than an "American-Israeli conspiracy."

And then there is Wissam al-Hassan, who is currently the main protagonist in this great game.

Al-Hassan was born in 1965 near Tripoli, Lebanon, into a Sunni clan that has enjoyed close ties with the Hariris. He became a member of Rafik Hariri's security detail, eventually advancing to become his head bodyguard. Al-Hassan had taken off Feb. 14, 2005, the day that a massive car bomb exploded while Rafik Hariri's motorcade was driving by, claiming at the time that he needed to study for a university exam. But this did not harm his career, and Saad Hariri would eventually elevate al-Hassan to the rank of brigadier general and a position as the country's intelligence chief.

On Oct. 19, al-Hassan died in a car bomb attack that bore many similarities with the one that killed his boss seven years earlier: Both were in Beirut, both were in broad daylight, and both were carried out by professionals. Both attacks involved a huge amount of explosives that claimed the lives of many more people than just the intended targets.

Al-Hassan was given a hero's burial and interred only a few steps from the grave of Rafik Hariri in a cemetery near Martyrs' Square in central Beirut. The circumstances surrounding his death have given rise to a number of questions. In fact, some wonder whether the 47-year-old might have even been a double agent, someone who had switched allegiances once or perhaps even several times. And if this is true, they ask, what does that say about those suspected of killing him?

Whatever the answers might be, the terrorist attack of Oct. 19 continues to grow more and more mysterious, and the STL may consider investigating it. Responding to written questions, the International Criminal Tribunal says that one first needs to determine whether the attack was related to the Hariri bombing. Moreover, it adds that launching such an investigation would also require an expansion of the STL's mandate by the United Nations and the Lebanese government, which covers 49 percent of the tribunal's costs.

Sources close to the tribunal say that al-Hassan originally stood at the top of the list of suspects in the Hariri attack. Indeed, investigators found it rather odd that Hariri's head bodyguard would go missing in action on the day he died. What's more, they established that al-Hassan spoke on the phone 24 times on the morning of Hariri's death even though he claimed he had to study for the university exam. An internal STL document says that al-Hassan's statements are "not very convincing" and have led to doubts about his alibi.

Still, the fact that he was far away when the attack occurred and that Saad Hariri believed his oath of loyalty was somehow enough to get al-Hassan out of the line of fire. Likewise, before long, he became the special tribunal's most important informant, providing investigators with details about the type of explosive used and recordings from mobile phones at the scene of the attack. The phone calls would eventually be matched to four members of Hezbollah -- and spell the downfall of them all.

In June 2011, the STL brought indictments against these four men, including Mustafa Badr al-Din, Nasrallah's chief of intelligence. An enraged Nasrallah reacted by threatening to "cut off the hand" of anyone who tried to extradite him and the other men. The four have since disappeared and are rumored to have fled to Iran.

However, such investigations weren't enough for al-Hassan. He soon became one of the most important political players in the region, forging some astonishing alliances along the way. For example, he arranged a meeting between Saad Hariri and Syrian President Bashar Assad. After the meeting, the former refrained from making any more vehement accusations that Syria was behind his father's murder. What's more, in a move that was highly unusual in terms of protocol, al-Hassan himself had a private conversation with Assad in Damascus.

At the same time, al-Hassan maintained extremely close ties with top-level officials in the intelligence apparatus of Saudi Arabia, which holds a critical stance toward the Syrian regime. Likewise, some Middle East insiders have even claimed that al-Hassan had ties to the Mossad, Israel's foreign intelligence agency. He ultimately allayed these suspicions with deeds: Under his leadership, Lebanese intelligence blew the cover of an entire network of Israeli spies operating in the country.

In recent months, the restless Lebanese intelligence chief had turned his attention to rebel forces in Syria. Just last summer, he apparently set a trap for Ali Mamlouk, who would be promoted in July from chief of Assad's general intelligence directorate to head of his national security council. Via intermediaries, al-Hassan encouraged Mamlouk to supply Michel Samaha, a former minister of information in Lebanon and staunch ally of the Syrian regime, with explosives to be used in attacks. Samaha was arrested in early August and reportedly confessed. It was a serious loss of face for Assad -- and a plausible reason for taking out the supposed turncoat al-Hassan.

Hezbollah might have also had a hand in the terrorist attack on al-Hassan, whose cooperation with the tribunal had made him a sworn enemy of the "Party of God." In any case, al-Hassan had surely received warnings about an attack. Two days before the assassination, he traveled to Paris to bring his family to safety. The next day, while returning to Syria, he made a stopover in Germany. There, he met with his German counterpart, the head of the Federal Criminal Police Office (BKA), for what was presumably a regularly scheduled talk.

In response to written questions, the STL confirms that the in absentia trial of the four Hezbollah members will begin on March 25, 2013, and that procedures allow "for evidence from unavailable persons to be admitted during the trial," including that of al-Hassan. What's more, the International Crimincal Court says that "Lebanon has an ongoing obligation to search for the accused" and the Lebanese authorities are obliged to report on a monthly basis. "We believe that justice should not be held hostage to the accused's desire not to participate in the proceedings," the tribunal wrote.

The FBI now has agents in Beirut to aid inthe investigation into al-Hassan's murder. It has reportedly determined that the explosives used to kill al-Hassan bear similarities to the ones used in the Hariri assassination. The planning and execution of the attack are also thought to point to the same group of perpetrators.