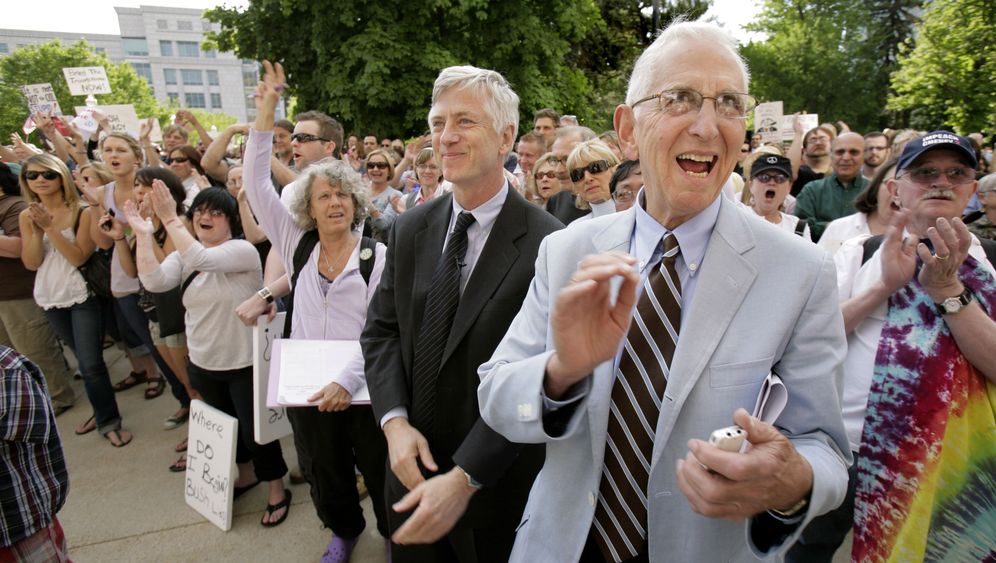 SPIEGEL ONLINE: Mr. Ellsberg, you're a hero and an icon of the left. But we hear you're not too happy with President Obama anymore.

Daniel Ellsberg: I voted for him and I will probably vote for him again, as opposed to the Republicans. But I believe his administration in some key aspects is nothing other than the third term of the Bush administration.

Ellsberg: I think Obama is continuing the worst of the Bush administration in terms of civil liberties, violations of the constitution and the wars in the Middle East.

Ellsberg: Take Obama's explicit pledge in his State of the Union speech to remove "all" United States troops from Iraq by the end of 2011. That's a total lie. I believe that's totally false. I believe he knows that's totally false. It won't be done. I expect that the US will have, indefinitely, a residual force of at least 30,000 US troops in Iraq.

SPIEGEL ONLINE: What about Afghanistan? Isn't that a justifiable war?

Ellsberg: I think that there's an inexcusable escalation in both countries. Thousands of US officials know that bases and large numbers of troops will remain in Iraq and that troop levels and bases in Afghanistan will rise far above what Obama is now projecting. But Obama counts on them to keep their silence as he deceives the public on these devastating, costly, reckless ventures.

SPIEGEL ONLINE: You doubt not only Obama's missions abroad but also his politics back home in the US. Why exactly are you accusing the president of violating civil liberties?

Ellsberg: For instance, the Obama administration is criminalizing and prosecuting whistleblowers to punish them for uncovering scandals within the federal government

SPIEGEL ONLINE:  Such as the arrest, confirmed this week, of an Army intelligence analyst for leaking the "Collateral Murder" video of a deadly US helicopter attack in Iraq, which was later posted online at WikiLeaks.

Ellsberg: Also, the recent US indictment of Thomas Drake.

SPIEGEL ONLINE: Drake was a former senior official with the National Security Agency (NSA) who provided reporters with information about failures at the NSA.

Ellsberg: For Obama to indict and prosecute Drake now, for acts undertaken and investigated during the Bush administration, is to do precisely what Obama said he did not mean to do -- "look backward." Of all the blatantly criminal acts committed under Bush, warrantless wiretapping by the NSA, aggression, torture, Obama now prosecutes only the revelation of massive waste by the NSA, a socially useful act which the Bush administration itself investigated but did not choose to indict or prosecute!

Bush brought no indictments against whistleblowers, though he suspended Drake's clearance. Obama, in this and other matters relating to secrecy and whistleblowing, is doing worse than Bush. His violation of civil liberties and the White House's excessive use of the executive secrecy privilege is inexcusable.

SPIEGEL ONLINE: Why would Obama reverse himself?

Ellsberg: He's a good politician. He said what he needed to say to get elected, and now he's just taking advantage of the office. Like any administration before, his administration caters to the profits of big corporations like BP and Goldman Sachs -- even though I think BP won't get off that easily this time. His early campaign contributions, the big corporate contributions, came from Wall Street. They got their money's worth.

In fact, during the campaign of 2008, three candidates were backed by Wall Street: Obama, Hillary Clinton and John McCain. If you look at the rhetoric, the most promising was John Edwards. Too bad he turned out to be a jerk.

SPIEGEL ONLINE: But Obama has been very verbal about his criticism of Wall Street.

Ellsberg: His actions are totally uncoupled from his public statements. I don't even listen anymore. He has turned 180 degrees. Another example: His promise to filibuster a law giving the phone companies legal immunity for any role they played in the Bush's domestic eavesdropping program. Then he not only voted not to filibuster it, he also voted for the law -- against the wishes of his backers.

SPIEGEL ONLINE: Do you think that will backfire for the Democrats in the upcoming midterm elections?

SPIEGEL ONLINE: You were the ultimate whistleblower. In 1971, you leaked the Pentagon Papers to the New York Times, revealing that the government was well aware the Vietnam War couldn't be won. You changed history but were vilified and prosecuted for it. Would you still do it today?

Ellsberg: I wouldn't wait that long. I would get a scanner and put them on the Internet.

SPIEGEL ONLINE: Would that still have the same impact?

Ellsberg: If the Pentagon Papers came online today all at once, the government wouldn't be tempted to enjoin it. Back then, we got this long duel going between newspapers and the government. In the end, 19 newspapers ended up putting up parts of the documents, day after day after day. It created this ongoing scandal. I don't think it would have the same impact online as having it in the Times.