After two weeks of talks at the United Nations climate summit in Durban, South Africa, participants were only truly united on one issue: They just wanted to get home and away from the soulless conference center as soon as possible.

Yet another United Nations summit has failed to yield the results necessary to stop run-away global heating of the atmosphere and oceans. At the end of the conference, success was measured by the number of years a global climate treaty can be delayed -- a truly grotesque development given the approaching threat. Ultimately, it was the procrastinators -- mainly delegates from the United States and India bent on keeping every option open instead of restructuring their economies -- who prevailed at the summit.

It would be wrong to pile all the blame on the UN for this. The reason climate conferences are so contentious is that they are a venue where stubborn national interests collide. Rich nations want to defend a prosperity that is fired by coal and oil. Meanwhile, emerging nations want to be given the chance to catch up economically. And the poorest countries want to avoid becoming victims of unchecked climate change. The outcome in Durban is the mirror image of these differences.

But there are nevertheless pressing challenges for UN Secretary-General Ban Ki-moon and his strategists following Durban. The UN's leadership needs to reform the format of future climate negotiations to render better outcomes more likely.

For the past 17 years, negotiations have led to little else than record CO2 emissions in 2010. Thousands of people are crammed together in rooms with deficient lighting and air. They are fed soggy sandwiches and subjected to sleep deprivation given the length of the marathon negotiations. In the end, decisions are made in what could be described as a kind of climate policy delirium. And those are only the obvious symptoms of an illness that resides deeper in the UN system.

The entire UN negotiating process has two major flaws in its design. It doesn't assess the real causes of CO2 emissions, and it presents the goal of CO2 reductions in an entirely negative light. Since the very beginning of the negotiations in Berlin in 1995, the phenomenon of climate change has been viewed through the prism of emissions that stream out of chimneys, exhaust pipes, smokestacks and forest fires. The very language of the UN convention describes climate protection as a "burden" and international measures of CO2 reduction as "burden sharing". Both end-of-pipe and burden thinking have created the wrong environment at these summits. Little is spoken of positive goals, and there is virtually no discussion of the economic opportunities that emissions reductions present. The only countries considered to be winners in the negotiations are those that succeed in forcing the other nations to agree to greater emissions reductions rather than taking action themselves. It should be the other way around: The winners should be those nations that endeavor to adopt the most progressive policies.

In addition to this negative character, an insanely complex procedure has also developed. Because politicians are unable to reach agreements, their officials and lawyers formulate increasingly complicated texts in legalese that have limited validity or meaning. During the final hours of negotiations in Durban, the issue at hand was over whether a "legal result" would apply by 2020 or whether it would be an "agreed result with legal power." It was pure climate summit jargon. Collective efforts to protect life on earth, of all things, have spawned a cold and gray negotiating terminology that only a select group of people can understand. Many climate negotiators themselves view these developments extremely critically and warn that we have gone down the wrong path.

Still, we shouldn't do away with these large-size climate conferences. Despite all the problems they entail, these conferences represent true progress for our civilization -- they are a cultural wonder of the world. There is no other problem on earth that moves delegates from 200 countries to come together in one place to work so hard to find a common solution. And a forum is needed in which these questions of humanity can be discussed in public and solutions negotiated with the participation of civic groups and business.

That makes it all the more crucial that the UN move to fundamentally alter the way its conferences are structured in the future. The most important thing is that the gatherings also delve into the deeper causes of CO2 emissions. This includes taking a critical look at:

Of course it is obvious that we need to negotiate harder to reduce CO2 emissions. Time is running out. By 2020, global emissions need to be reduced from today's 50 billion tons a year to 44 billion if we want to stand any chance of limiting global warming. That's why the summits need to continue to debate CO2 emissions ceilings as well as per-capita CO2 budgets in order to achieve a global climate treaty as quickly as possible.

But in order to advance the true causes of the problem, new issues, new negotiating forms, new goals and a larger number of participants are needed -- even if that makes these meetings even more complicated.

In addition to environment ministers, economics, foreign and defense ministers should also attend these summits in the future. That would at once spell an end to climate change's status as a niche environmental issue. Future summits should focus on the roots of the problem. How can the global economic system and economic policies be changed in order to foster environmentally friendly growth? An agreement to eliminate the $410 billion in subsidies for fossil fuels would be central to that. It will only be after fair and modern competitive conditions have been set that the "Green Economy" and CO2 reductions can become economically successful. At that point, the current postponement of alleged burdens would transform into a race for business opportunities.

Positive, tangible and constructive projects are also needed instead of abstract emissions reductions targets. For example, a Human Energy Project could be organized under the auspices of the United Nations that would bring together researchers from around the world in the same way the Human Genome Project did. They could join forces in research into renewable energy sources and efficiency technologies and also place the patents for such procedures in the public domain so that they could be used by everyone. Another project could be a concrete plan for filling the world with environment schools in which much of the education would be completed in nature itself or in school gardens. That would be more effective than 90 percent of the text found in the summit's closing statement.

Most important would be for future climate summits to be transformed into forums for public and mutual learning rather than just the site of brutal haggling. Instead of the usual attacks against each other, each country should also present its own contribution to finding a solution. This would enable the Japanese prime minister, for example, to explain how his people are able to live well without giant, overly heated homes. Or it would provide India with the opportunity to share the fact that hundreds of millions of its people are vegetarians. The US president could also present the very promising findings of American energy research. Meanwhile, an African government leader could report on what he plans to do in order to supply his country with renewable energies. Finally, the Chinese prime minister could present his blueprint for a sustainable "Chinese Way of Life". Instead of CO2 technocracy, these summits should focus on developing a joint and attractive scenario for life in the 21st century.

That wouldn't just be pseudo harmoniousness, either. It would foster a positive negotiating atmosphere and also enable climate policies to be conducted not just in a way that passively averts danger, but also as a means through which the future can be shaped.

When the strategists at the UN now begin considering future climate summits, they should design events that don't just drive the partcipants away in the end. The summits so far have lacked rituals that reflect how valuable and important these meetings of humanity actually are. At the beginning and at the end of the "Conference of the Parties," a colorful and lively celebration should be held in the future, a "Party of the Conference," where countries offer the best food their culture and nature has to offer and where the best musicians from around the globe perform. If the ministers and negotiators would want to stay on at the end of the summit in order to celebrate together, it would serve as a sure sign of a better path than the one taken at Durban. 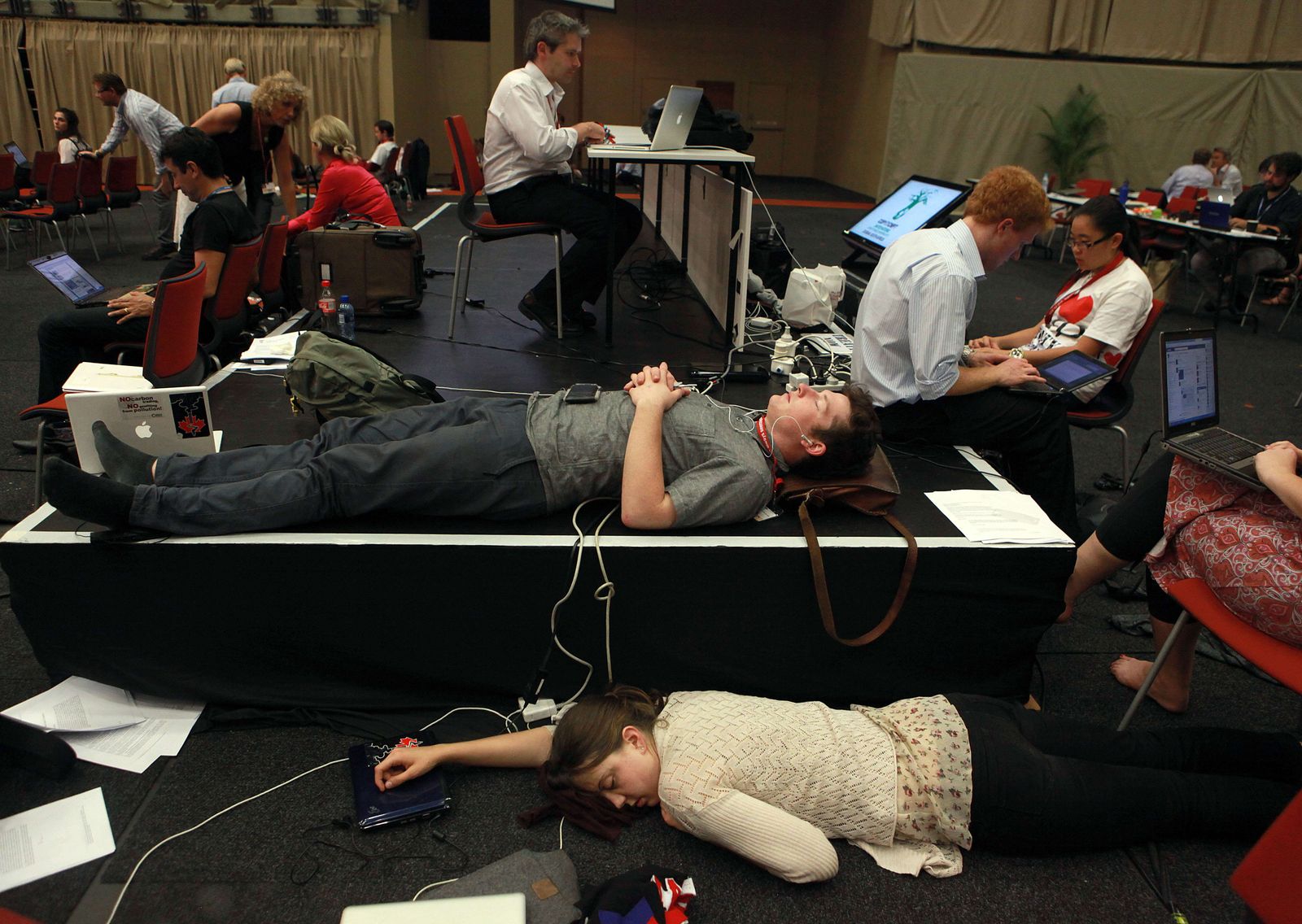 Too little sleep and too little air: UN climate summits can be exhausting for participants.