An unswerving principle of infallibility has traditionally applied at the Vatican, in particular when it comes to questions of doctrine: Popes don't make mistakes. Benedict XVI has shattered this principle with a letter dated March 10, addressed to his "dear brethren in the Episcopal ministry." He mentions a "mishap which I sincerely regret." And he mentions the consequences -- a reorganization of decision-making bodies that will end the career of a powerful cardinal. 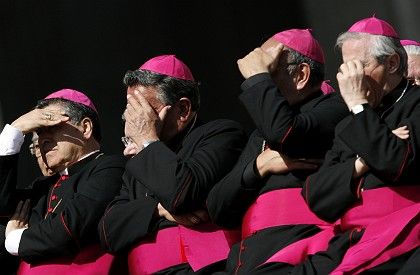 What does he mean by mishap?

The Ecclesia Dei Pontifical Commission, which was responsible for the Richard Williamson case, is being dissolved and will be merged with the Congregation for the Doctrine of the Faith, a control authority headed for years by Cardinal Joseph Ratzinger -- before he became Pope Benedict XVI. Now the pope believes it should take on more authority.

As a result, Cardinal Darío Castrillón Hoyos, who triggered the Williamson debacle in mid-January, has been deprived of his power and, at almost 80, will slip into a well-earned retirement. "Now that was quite a crash," a prelate who witnessed the events said on Wednesday afternoon.

So much self-criticism is rare from a pope. A convoluted sentence in his letter even suggests a sensation for the Catholic Church, though it's easily to overlook at first glance. The Vatican, with its petrified hierarchy, could be shaken by this obscure remark: "The collegial organs through which the Congregation works on the questions arising (especially the regular assembly of the Cardinals on Wednesday and the General Assembly every one or two years) guarantee the involvement of the prefects of various Roman congregations and of the worldwide episcopate in the decisions to be made."

What does it mean? Benedict is referring to a meeting of decision-makers in the Vatican that is not part of any established council. With "the regular assembly of cardinals on Wednesday," he apparently wants to install a kind of political cabinet of cardinals -- which has never existed in this form and which was proposed weeks ago by Father Eberhard von Gemmingen, the editor-in-chief of Radio Vatican's German department.

The controversy over Williamson, a known Holocaust denier who belonged to a group of four bishops excommunicated in the 1980s for defying the Vatican, belonged to a larger effort by Benedict to bring the fractious and ultra-conservative Society of Saint Pius X (SSPX) back into the fold. In his letter, the pope uses plain figures to explain why he wants to heal the rift with the SSPX. "Can a community leave us totally indifferent in which there are 491 priests, 215 seminarians, 6 seminaries, 88 schools, 2 university institutes, 117 brothers, 164 sisters?" he writes. "Should we really calmly leave them to drift away from the Church? I am thinking, for example, of the 491 priests. The plaited fabric of their motivations we cannot know

"Should we simply exclude them," the pope goes on, "as representatives of a radical marginal group, from the search for reconciliation and unity?"

He also takes his critics to task. "It has saddened me that even Catholics who could have known better have thought it necessary to strike at me with such ready hostility," writes the Holy Father. Even within the church, the dispute over the SSPX was waged with "a vehemence we have not experienced for a long time."

The 82-year-old Benedict's letter contains another message that is unusual for a pope. In the future, he writes, the Vatican should follow more than just news in the printed media. The controversy over Williamson was fired by an interview he conducted with a Swedish television, widely available on YouTube, as well as swift commentary on the Web. "I understand that following the news available on the Internet would have made it possible to obtain knowledge of the problem in time," writes the pope. "I learn from this that we at the Holy See have to pay more careful attention to this news source in the future." In plain language, the pope is telling his clergy: Do more research online!

Will the letter put an end to miscommunications at the Vatican? At the very least, it heralds a new orientation in Rome, combined with a self-critical pope. These two changes could lead to a new climate both within the Vatican and in its relationship with bishops around the world.

Whether the pope's letter will lead the church to a new beginning or back to its old ways, however, only time will tell.