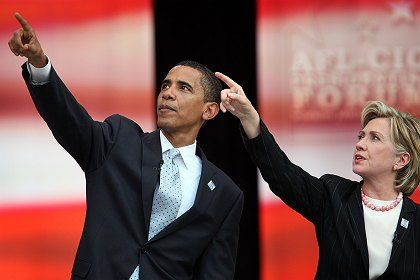 Newt Gingrich was more than satisfied. The archbishop of America's conservatives was purring like a cat when he appeared at a luncheon with foreign journalists. Better yet, a cat that had just devoured a couple of mice.

Gingrich's mice are Democrats who have recently begun challenging wartime President George W. Bush by trying to beat him at his own game. Democratic presidential hopeful Barack Obama had just raised the issue of terrorist cells in Pakistan and suggested the idea of a US military attack on the nuclear state. "If Musharraf won't act, we will," he told an audience at Washington's Wilson Center. With that kind of rhetoric, the Democrats' new shining hope might as well be called Barack Bush-Obama.

A man like Gingrich, who has conveniently replaced the now-defunct image of the Soviet communists as his public enemy No. 1 with that of the Islamic fanatic, should feel vindicated. In fact, he even praised -- patronizingly, of course -- the young senator, saying that what Obama had to say about Pakistan was spot on. Gingrich is pleased to see a political adversary calling for a new military campaign when everyone else these days is talking about withdrawal. Pakistan, said Gingrich, "is enormously dangerous ... we need to have a strategy for Pakistan." Of course, when someone like Gingrich talks strategy he really means the use of missiles, mortars and flamethrowers.

The wind has shifted in Washington. America, not just its president, is at war. The Democrats are still critical of the failed Iraq campaign, but they are no longer opposed to the "War on Terror" in general. It has been accepted, and not just as a metaphor.

Opinion polls have shown consistently for months that while most Americans disapprove of Bush, very few are opposed to the worldwide fight against terrorism. Most Americans believe that the campaign against al-Qaida and its ilk is the only conceivable -- in fact, the natural -- reaction against the attacks of Sept. 11, 2001. The president is not faulted for his declaration of war against the terrorists, but he is blamed for having botched the war in Iraq.

Ninety-two percent of Americans are opposed to an immediate withdrawal from Iraq, and a majority doesn't want to see the US's special detention camp at Guantanamo Bay closed. At the moment, the American electorate's biggest criticism of Bush is that he has "not been aggressive enough" in pursuing terrorist leader Osama bin Laden.

The results of opinion polls weigh heavily in the third-largest nation on earth, a country spanning four climate zones. Politicians, no matter how affable, are simply incapable of fully gauging public opinion by meeting with their constituents or making local campaign appearances. In a country as vast as America, professional pollsters play a more important role than anyplace else on earth, especially with elections just around the corner.

The candidate Americans elect to be their next president in November 2008 will serve a parallel role as commander-in-chief of the US military, a position that affords the president virtually totalitarian powers to shape policy.

Who Is Tough Enough for the Job?

Indeed, when voters hit the ballot box in November 2008, they will be looking for more than just a candidate charismatic and clever enough to lead the country politically. They will also ask themselves which of the candidates is sufficiently tough, crafty and brutal to win the multi-front war that the Bush administration has begun.

In these early weeks of the 2008 presidential campaign, the candidates from the two major parties are literally vying for the distinction of being the most crafty and pugnacious of the lot in the public eye. The Republicans, especially former New York Mayor Rudy Giuliani, have kept their steel-plated combat armor on. Their take on the fight against terrorism is to up the ante. Giuliani is fond of saying: "Weakness produces aggression." 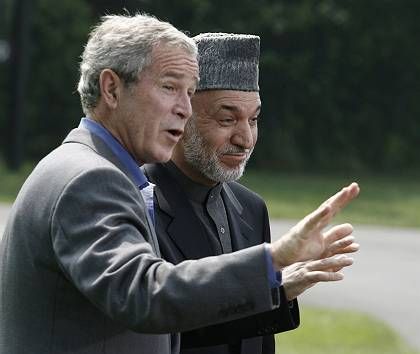 Anyone who hopes to win the support of middle America -- geographically, sociologically and politically -- has to perform a balancing act of appearing capable of leading the country in war while at the same time not coming across as too eager to fight. Americans want a strong leader, a tough decision maker, not an adventurer. The worst charge one could hurl at a presidential candidate these days is that he or she is soft on terrorism.

In this atmosphere, even the Democratic presidential candidates are lining up to show their support for the troops. In an essay in Foreign Affairs, African-American presidential candidate Barack Obama writes that the US military urgently needs "revitalization." More than any other candidate, Obama insists that a strong military machine is necessary to preserve peace.

Left-leaning Democrat John Edwards, a lawyer who earned a fortune arguing class-action lawsuits, is taking pains to hold his own on national security. Edwards has said that he favors spending more money on special counterterrorism units within the military and CIA. "There is no doubt in my mind," Edwards said, "that we must confront the terrorists with the full force of our military."

'Presidents Have Used the Nuclear Deterrent Since the Cold War'

New York Senator Hillary Clinton agrees. But what exactly is the "full force" of the American military? Clinton was recently asked whether this also means the use of nuclear weapons. She responded that she would not rule it out, knowing that the question is seen as a test of strength for every presidential candidate.

Given that shrugging and vacillation are seen as a sign of weakness, though, Clinton added: "Presidents have used the nuclear deterrent ever since the Cold War ... I don't believe that any president should make any blanket statements with respect to the use or non-use of nuclear weapons."

But during a Senate debate over Iran some time ago, Clinton said that the government should "take nuclear weapons off the table." The explanation a spokesman for her campaign team provides for her change of heart is as straightforward as it is obvious: She wasn't speaking as a presidential candidate at the time.

Upon closer inspection, the time plan Clinton has proposed for a gradual US troop withdrawal from Iraq also proves not to be a call for an end to combat operations, but merely as a new chapter in the fight against terrorism. The architects of this withdrawal plan see it as a joint effort with regional Kurd, Sunni and Shiite leaders, as well as the regular Iraqi army. In fact, the plan calls for expanding all Iraqi forces.

No Signs of War Fatigue

The intended result is that tomorrow's dead would no longer be America's dead -- a renaissance of the classic proxy war.

The clearest reflection of this expansion of the combat zone is the American military budget, which has almost doubled -- to $500 billion annually -- during the course of the Bush years. "This level of military spending will endure, both economically and politically," predicts conservative essayist Robert Kagan.

It has been five years since the attack on the World Trade Center, and yet the majority of Americans are still far from disenchanted with the war. But they are deeply dissatisfied with the way the war is going. 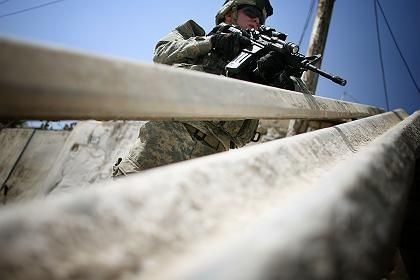 A US soldier in Iraq: "Weakness just encourages aggression"

Many Americans now despise Bush, who not only fabricated the reasons for going to war in the first place ("weapons of mass destruction") but also falsely claimed, with his now-famous "Mission Accomplished" speech, that the war had ended when in fact it had not. Nevertheless, Americans are still loath to admit defeat.

This is precisely what distinguishes Europeans from Americans. After experiencing the horrors of two world wars, the nations on the Old Continent prefer the power of diplomacy. The Americans favor the power of force, even in its crudest form, which explains why US military might is so superior to that of all other nations. The country spends 10 times as much on its military budget as Great Britain.

A Major Roll for Preventative Wars

Even the American left, which refers to itself as "liberal," has no fundamental objection to the men and women in uniform. Indeed, US liberals are especially fond of a strategy Germans consider obscene: preventive war.

This has nothing to do with a "conservative revolution," but a lot to do with Germany itself, or, more specifically, Nazi Germany. It was Winston Churchill, Britain's wartime prime minister, who drew a conclusion from the events of the day that was as logical as it was disturbing: A preventive occupation of Germany in 1938, which would have been a year before Hitler started the war, could have spared the world another world war and the Jews the concentration camps.

This concept of preventive attack has not lost any of its appeal in America. It plays an important role in the debate within the American left over the pros and cons of military invasions of Iran and Darfur. Obama has now weighed in on this debate. 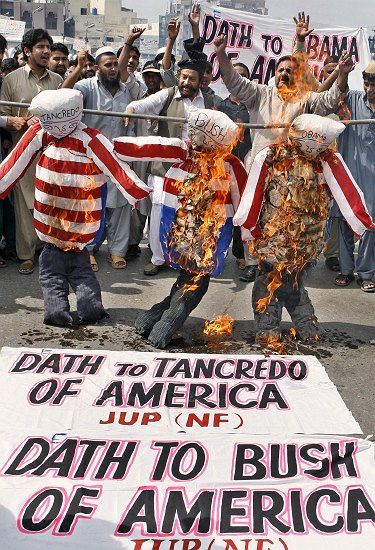 An anti-American protest in Pakistan: Is rooting out terrorists in the country a matter for militaries or intelligence agencies?

In his speech at the Wilson Center, Obama said that terrorist activity in northwestern Pakistan poses the greatest threat to America's security. "Al-Qaida terrorists train, travel and maintain global communications in this safe haven," he said, adding a thinly veiled threat to Pakistani President Pervez Musharraf: "It's a tough place. But that is no excuse. There must be no safe haven for terrorists who threaten America. We cannot fail to act because action is hard." As the commander-in-chief of the US military, Obama said, he would not hesitate "to use military force to take out terrorists who pose a direct threat to America."

Co-opting the Arguments of Political Adversaries

And there it was. It took President Bush, who, in his earlier days, would have been just as likely to recommend such preventive attacks on the territory of sovereign nations, a few days to come up with a response. When he did, it was to say that finding terrorists in Pakistan is a matter for the intelligence agencies, not the military.

But the lame duck commander-in-chief found himself pretty much alone with his politically astute admission. Senator Joe Biden, the old master of Democratic foreign policy, said that this is the sort of thing a government does -- but doesn't announce publicly. At a campaign appearance in Chicago, Hillary Clinton responded to the president's comment by saying: "It was a big mistake, blurting it out like that."

To shore up her own national security credentials, Senator Clinton made sure early on that she would be appointed to the Senate Armed Services Committee, where she gained a reputation as a strong proponent of military strength. She has also visited Baghdad once -- in the company of right-wing Republican John McCain.

But there is one question that remains unanswered, at least for now: Who in fact benefits from this strategy of co-opting the arguments of political adversaries? Who will emerge as the winner if the candidate's basic positions are so similar?

Newt Gingrich thinks he already knows the answer: the Republicans. At least, he says, they would stand a solid chance of winning the race for the White House if there is a shift in the public mood. Gingrich firmly believes that one of former British Prime Minister Margaret Thatcher's principles still holds true today: "First you win the argument, then you win the vote."