French President Nicolas Sarkozy's appearance was brief. At the end of the Libya summit in Paris, he went before reporters and announced the beginning of operations against Libya. "We have agreed that the UN resolution will be enforced," he said. "The participants of the summit have reached consensus on the use of all necessary measures -- particularly military."

"Our forces will oppose any aggression by Colonel Gadhafi" against Libyan civilians, Sarkozy stressed. He said that the West had clearly warned Libyan dictator Moammar Gadhafi that military force would be used should he continue operations against civilians in the northeastern part of the country, where anti-Gadhafi rebels have been holding out for weeks. "He ignored the warnings," Sarkozy said.

By then, warplanes from France, Britain and Canada were already in the air above Libya. The operation was authorized by a resolution passed by the United Nations Security Council on Thursday in New York. The resolution foresees the establishment of a no-fly zone over Libya and the use of "all necessary measures" to protect the civilians of Libya.

Sarkozy said that the initial aim of Saturday's sorties was to put a stop to ongoing Libyan air attacks on the northeastern city of Benghazi. The city had become the center of a rebel movement that appeared set to oust Gadhafi from office at the beginning of the month.

But, in recent days, the dictator struck back and announced his intention to move against Benghazi, where the rebels had begun to assemble a provisional government. "We will find you in your closets. We will have no mercy and no pity," Gadhafi said Friday.

In his statement, Sarkozy said that additional French planes are "prepared to take action against tanks that threaten civilians," and added that Gadhafi could still avert the worst if he complies with the UN resolution without reservations. "The door to diplomacy will open again once the attacks come to an end," he said, referring to Gadhafi's operations against the rebels.

Following the meeting in Paris, British Prime Minister David Cameron said that "the time for action has come. It needs to be urgent. We have to enforce the will of the United Nations, and we cannot allow the slaughter of civilians to continue."

Citing official sources in Berlin, the German newsmagazine Focus reported on Saturday that British special forces units have been in Libya for weeks preparing for possible operations. The magazine wrote that they noted the locations of strategic targets, such as fighter jets, air defense sites and communications facilities. The units, the magazine reported, belong to the Special Air Service and to the Special Boat Service.

French Hoping to Assume the Lead

The summit in Paris was called by Sarkozy on Friday to discuss the situation in Libya and attended by several heads of state and government in addition to United Nations Secretary General Ban Ki-moon. According to the French daily Le Figaro, Norway was also to take part in initial operations. The US and several Arab countries were likewise expected to fly missions over Libya, the paper reported.

German Chancellor Angela Merkel also took part in the Paris summit. Germany, a non-permanent member of the UN Security Council, elected to abstain from the Libya resolution vote, saying it was not prepared to participate in military operations in Libya. Berlin, however, has explored the possibility of taking over AWACS reconnaissance flights in Afghanistan to free up NATO capacity for operations in Libya.

But according to sources in Brussels, where NATO is headquartered, Paris is seeking to assume the mission's coordinating role itself. Paris foresees no "visible role" for NATO in the operations because the alliance does not have a good reputation in the Arab world, the sources said.

The NATO council was to meet a second time on Saturday evening after a gathering in the morning was unable to reach consensus on military operations. The UN resolution authorizes the use of air power, but not ground troops.

Stalling and Accusations of Provocation

Saturday's operations come a day after Gadhafi announced an immediate ceasefire in the wake of the UN resolution. Throughout Friday and into Saturday, however, it became apparent that he had little intention of living up to the promise as forces loyal to him advanced on Benghazi Saturday morning. Al Jazeera reported that the pro-Gadhafi forces have reached the city limits.

SPIEGEL ONLINE reporter Jonathan Stack reported having seen a plane go down in the city, saying he thought the plane belonged to anti-Gadhafi rebels. "The atmosphere in the city is very tense, and the rebels are disorganized," he reported from the city. "They are driving to the front in taxis to join the battle against Gadhafi troops." In the city's streets, people have erected blockades made from garbage containers, wood, stones and bedframes. Several people were assembling Molotov cocktails to defend themselves.

Rebels have said that the cities of Misurata and Zintan, further west from Benghazi, have likewise been attacked. The Gadhafi regime has denied that such an offensive has taken place. According to a statement by the state news agency Jana, pro-Gadhafi troops had only taken measures to defend themselves after having been attacked by the rebels. A government spokesman accused the rebels of trying to provoke a foreign military intervention. 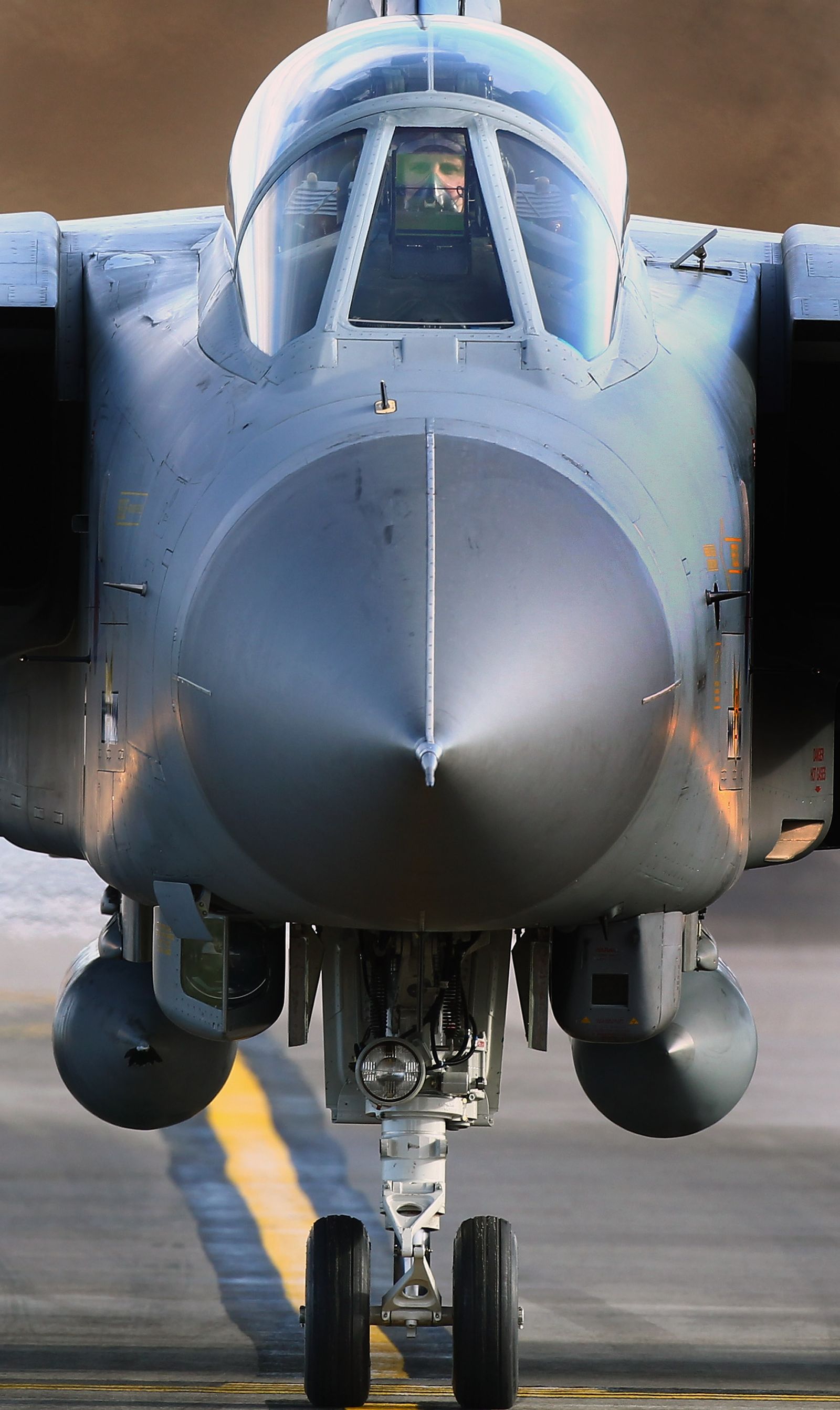 A pilot lands an RAF Tornado at Lossiemouth Air Base in Scotland.