While international journalists are piling into Libya to report on the air strikes by Western fighter jets, while children are playing among destroyed tanks and the rebels are storming towards Ajdabiyah, there's a strange, separate war raging behind the front line, in Benghazi.

Conservative reformers, inexperienced rebels and supporters of Libyan leader Moammar Gadhafi are pitted against each other in this struggle. A new order is being established in the city. And the longer Gadhafi manages to stay in power, the longer schools stay shut and commercial life remains on hold, the greater the chance that the revolution will fail. Without Gadhafi having to lift a finger.

On Liberation Square at the old courthouse, a declaration was issued on Monday that the "Ligan Thauria," the old revolutionary committees and supporters of Gadhafi, had 24 hours to hand over their weapons. If they didn't, they would be treated as what they were: murderers and enemies of the revolution. The term "enemies of the revolution" is familiar. It was used in the French Revolution to put old opponents under the guillotine. Gadhafi used those words himself after his own revolution. 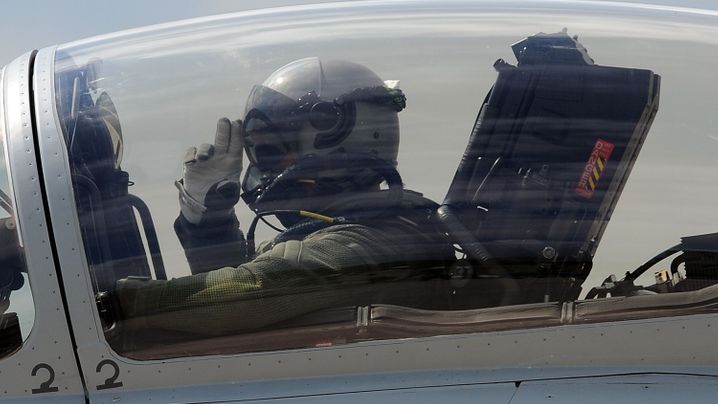 Monday's announcement was the first official declaration on this issue. Recent days have already shown how the rebels are dealing with the enemies of the current revolution. Homes were raided, neighbors dragged off, suspects executed. They were accused of being reactivated by Gadhafi, like al-Qaida activates sleeper cells.

Perhaps the accusations are true. Mohammed Nabous fell victim to Gadhafi loyalists last Saturday. He was one of Benghazi's most prominent journalists. He covered the uprising from Day 1 and set up the first free TV station in the city. He was shot dead shortly after he broadcast evidence that the dictator was breaking UN sanctions. He had just turned 28 and leaves behind a wife and an unborn child.

Across the city, people are disappearing after having spoken to reporters, and journalists themselves are vanishing as well. Some people one interviews don't want to give their names, refuse to be photographed, don't want to meet up and are worried that their phones are being tapped. Rumors are circulating that Gadhafi is targeting Western media to drive them out of the country.

Some 300 Gadhafi supporters with "blood on their hands" are in Benghazi, says Abdul Hafiz Ghoga, a spokesman for the rebels. They drive around in cars firing at passersby in order to spread fear. Others put the number far higher, at 7,000.

"We were all somehow Ligan Thauria," says the neighbor of a Gadhafi loyalist who has just been arrested. People joined up to get student grants to get ahead in their careers, but that didn't make people killers, he says. It sounds like the kind of excuse a former informant of the East German Stasi secret police might give.

A driver waiting in front of a hotel who overheard that I was German said: "Gadhafi good! Gadhafi - Germany - good!". Whenever he came to rebel checkpoints, he gave their "V for Victory" sign, but when he had driven past them, he raised his fist the way Gadhafi does at his propaganda rallies.

Benghazi isn't a pure rebel stronghold, there are Gadhafi supporters here too. They're keeping a low profile and waiting for better days. Some still see Gadhafi as the strong leader he claims to be, as the man who promised to build half a million new houses, which haven't been finished yet, who creates an entire river, the Great Man-Made-River project, which has dried up.

But the rebels have become dangerous too. There is mounting frustration at the slow progress of the revolution. Apart from military successes, not much is happening. Many people are unemployed. Large companies, including German construction firm Bilfinger Berger, have pulled out of the city. Young men race around town with tires screeching, others strut around in public buildings brandishing their knives. At night, the streets are reminiscent of Sao Paolo gang wars, the only difference being that the youths here wear flak jackets.

Many young academics who were about to complete their studies and to get a good job are starting to get frustrated. One, who only talks on the condition that he remains anonymous, studied economics at the Gharyounis University. He was offered a job as a manager at Bilfinger Berger and would have earned good money. Now he's unemployed. He says of the rebels: "They are under 30 and don't have wives. They are proud of the weapons they looted from barracks. They don't know how to control themselves. They quickly become aggressive. They've got these weapons and lose themselves."

But the revolution is good, despite all that, he insists.