In Bauchi, there are rumors that militant Muslims are preparing to attack Christians in Jos, 100 kilometers (62 miles) away. Is it true? Or just an attempt to spark fear?

Nothing is certain in Jos, a city of close to a million inhabitants in central Nigeria's so-called "Middle Belt," a broad region between the 8th and 12th parallels north. Somewhere in this region, a shifting line separates Nigeria's predominantly Islamic north from its Christian south. Many Christians fear that followers of Allah are trying to expand southward, and Jos lies in the midst of the conflict. 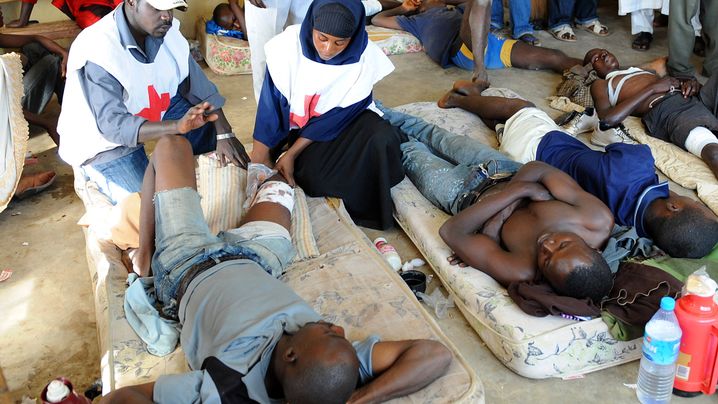 Violence erupted again last week, shortly after the would-be Detroit bomber, Umar Farouk Abdulmutallab, was identified as a Nigerian Muslim. "The Hausa-Fulani are not part of us," Christians wrote on Internet forums, referring to the country's largest Muslim ethnic group, to which Abdulmutallab traces his origins. "They are bastards, mixed with Arab blood to terrorize the world. They do not like education. They hate civilization and I wonder why they still exist as part of the human race."

Pastor James has come to Jos for a few hours. This is not a good sign, because wherever Pastor James turns up, terror isn't far away. He has just come from Bauchi, and he too has heard talk that the Muslims there are arming themselves.

The 50-year-old pastor is one of the most prominent peace activists in Nigeria. One reason he's so famous is that he appears often with Imam Muhammad Ashafa from Kaduna in north-central Nigeria. The men preach the same message: "No matter whether you are Christians or Muslims, live your religion but don't kill anyone." Another reason the pastor is so prominent is that 20 years ago, going by James Wuye, he was known as a feared Christian militia leader in Kaduna, about 200 kilometers west of Jos. He lost an arm battling the people his current partner at the pulpit represents. "I hated the Muslims," he says. He came to his senses in the mid-1990s, and since then he has called himself a "conflict manager." Pastor James is a busy man today, preaching peace throughout Nigeria.

The country has a population of about 150 million; its roughly 400 ethnic groups speak more than 400 languages. Half the nation prays to "Allah" and the other half to "God." Hardly anywhere in the world has the ongoing rivalry between Christians and Muslims claimed so many victims, with at least 10,000 dead.

There has been killing everywhere. Muslims have been hunted down in the southern port city of Lagos, while Christians have been victimized in Kano in the Muslim north. But the majority of deaths occur in the Middle Belt, in places like Kaduna and Bauchi, and particularly Jos, where followers of the two religions live relatively close to one another.

In almost no city in the world is the clash of civilizations more evident. Without a wall, Jos is a divided city. Entire neighborhoods go up in flames, over and over, most recently in November 2008. Each new conflagration claims hundreds of lives. In 2001 Muslims set fire to the enormous indoor market buildings in downtown Jos, which house more than 10,000 market stalls. Most of the casualties were among members of the primarily Christian Ibo tribe. After each new conflict, the divide between religions becomes more raw.

Arab traders brought Islam to the Sahel zone about 1,000 years ago, but for a long time it played only a secondary role as a religion. Trade, including the slave trade, was more important to the caliphs and emirs than faith. Christian missionaries penetrated up from the south a little over 100 years ago, following the country's British colonial masters. But the British allowed the emirs to prevail and prevented the missionaries from advancing any further. One consequence of the colonial masters' decision is that schools and universities in the south today are much better than those in the north.

The military governments that ruled Nigeria until 1999 used authoritarian means to hold together the multiethnic nation. Then came democracy. A new constitution and informal agreements brought a measure of stability -- for example, under new rules, the presidency will change hands between Christians from the south and Muslims from the north at least once every two terms, while the vice-president and the president will each be from one of the two religious groups.

But such agreements have not guaranteed the peace.

'The Government Covered Up the Real Numbers'

Olusegun Obasanjo, a Christian, had hardly been voted into office in 1999 when 12 states in northern Nigeria introduced Sharia law, triggering an outcry throughout the Christian world.

The causes of periodically erupting religious conflict are sometimes banal and often far-fetched. When the Miss World contest was scheduled to be held in Nigeria in 2002, Muslims were angered by an insensitive newspaper commentary. The ensuing violence claimed 215 lives in Kaduna alone.

Uche Uruakpa, 38, can describe the religious conflict from a unique perspective. He's a Christian doctor, and in 2001 he started working in the largest Muslim hospital in Kano, a city of a million people -- 90 percent of them Muslim. "On some mornings, there were 2,000 patients lying in front of my office in the hospital," says Uruakpa.

The bloodshed began when a fundamentalist Muslim saw a Christian child on the street carrying a page from the Koran -- and promptly killed the child. Hundreds died in the ensuing frenzy. "The government covered up the real numbers," says Uruakpa, who hid for two weeks in Kano's Christian neighborhood and left the city a year later. "They would have to offer a lot for me to work there again," he says.

Uruakpa lived in a culture that he found foreign and impenetrable. "I saw them all," he says, including men with four wives, the maximum number a man is permitted to have in Islam. Some married girls, he says, were not even 12 years old. "The men came to me with their large families, and I had to ask them which ones were their wives and which ones were their daughters."

Exodus from the North

In the early 1990s there were about 500 industrial firms in Kano. Ten years later, that number had declined to about 200. This is one reason why many Muslim Hausa-Fulani have moved further south where, in cities like Kaduna, Jos and Bauchi, they now form the new proletarian poor.

Sheikh Khalid Aliyu is familiar with the boys who sell adulterated gasoline in bottles along the arterial highways in Jos, periodically getting high by sniffing gasoline or glue. "Poverty, bad policy and tribalism are the fuels of discontent," says Aliyu, whose organization promotes conciliation and understanding among the Muslim population.

Aliyu knows all too well that the successes are modest. "Politicians aren't solving the problems," he says. "No jobs, no education, no electricity, nothing to do. A hungry man will not produce peace," he says.

The Christians now feel threatened, while the Muslims feel marginalized. The Hausa-Fulani have particular problems when they arrive in Jos. Because Nigerian law distinguishes between new arrivals and local residents, they are unable to shed the label of "newcomers" in the city, which has a Christian-dominated government. This prevents them from securing jobs in the public sector or gaining access to universities. The same is true throughout Nigeria, but in places of great poverty, anger grows rampant -- and with it the urge to find refuge in religion.

'Both Sides Are Preparing for Battle'

Maiduguri in the far northeastern corner of Nigeria, with an estimated population of more than a million, is one of those places -- dusty, isolated, impoverished. There are dozens of Koran schools in Maiduguri, some funded with money from Saudi Arabia. Trucks filled with children from Niger and Chad occasionally arrive in the city, and the children are taken to madrassas to learn the Koran, but not reading and writing. When they are not in school, the children are expected to work.

"It's modern slavery," says Bolaji Aina of the German's Society for Technical Cooperation (GTZ), which supported women's projects in Maiduguri for many years. Boko Haram, an Islamic sect, has been all too willing to take on these latter-day slaves. More than 700 people died last July during clashes between the sect and police in Maiduguri.

The country has plunged headlong into 2010, divided, without any real prospects and without leadership. President Umaru Yar'Adua has been in a Saudi Arabian hospital for weeks, incapable of governing his country amid growing demands for the appointment of a successor. But who would it be? Another Muslim like Yar'Adua? Or is the Christians' turn?

"Both sides are preparing for battle," says Pastor James, the peace missionary, in Jos. "It's a cat-and-mouse game. The events in the north are also radicalizing the south."

It was quiet in Jos over the Christmas holidays. But, as it happened, the rumors coming from Bauchi were not rumors at all. Clashes in the city last Monday, instigated by an Islamic sect, claimed 38 lives.