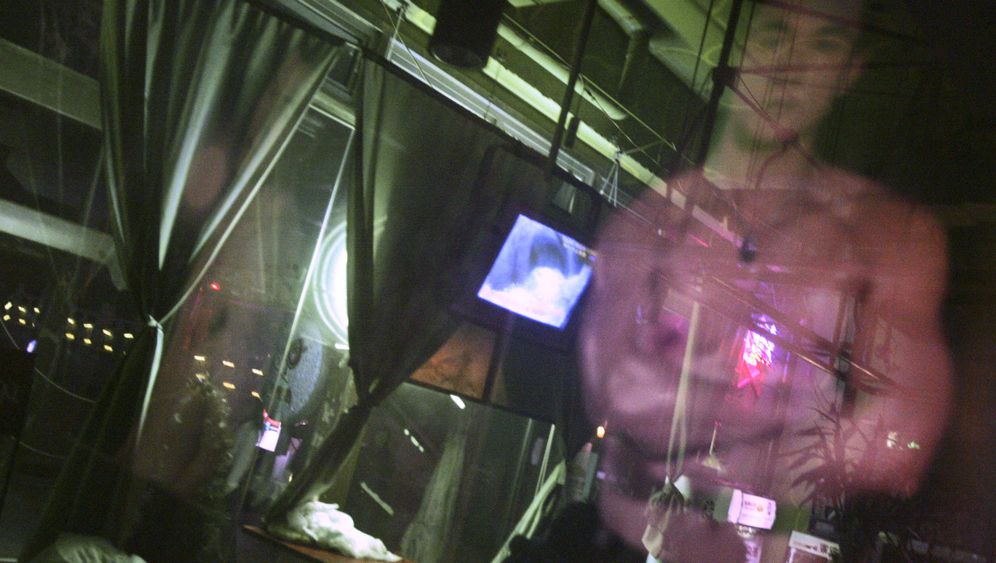 Photo Gallery: The Challenge of Being Gay in China

While Xiao's wife was in the bathroom showering and putting on her makeup, Xiao's lover Lian slid under the covers with him. Xiao pulled Lian close, embraced him and kissed him. After a few minutes, Lian slipped out again. Officially, Lian was an employee in Xiao's restaurant, a small establishment located directly under Xiao's apartment in the city of Tianjin.

Xiao recalls that he thought his wife would never find out about his secret lover. Then one day she said to him, "You seem much happier when that man is under our covers than when I'm there."

Xiao Bin, 42, is gay and has been married to a woman for seven years. He's a small, lean man in a white shirt and worn leather jacket, with a face that has soft skin but a good many wrinkles. He agrees to tell his story on the condition that all the names be changed.

Academics at Qingdao University who study sexuality estimate there are 30 million gay men and women living on the Chinese mainland, and that 90 percent of them are thought to live in marriages of convenience. Some have children. Most also continue to sleep with same-sex partners.

When Xiao married pretty, petite Hong Zhao, he was trying to do what society expected of him, and to make his parents happy. He didn't realize how difficult that decision would make all of their lives.

In the Thrall of Family

Xiao remembers clearly the day he came out. He had just broken up with his girlfriend, and his father came to his room, wanting to know why the relationship had ended. Xiao answered that he just didn't love his girlfriend, but his father wouldn't let it drop, wanting to know what the matter was, why his son never seemed to manage to make things work with women. They argued, and eventually Xiao lost his patience.

"I'm gay," Xiao said. "I don't like women."
"Don't try to talk your way out of this," his father answered. "Don't try to find excuses."
"The girl I've been going out with for four years," Xiao countered. "I've never touched her hands."

At that, his father shouted, "Out! Get out of my house."

Xiao thought his family would never speak to him again. He wanted to forget his father's rage, his mother's tears. He felt conflicting emotions: anger, sadness, liberation. He didn't plan on ever coming back.

In many countries it is religious pressures that make life difficult for homosexuals; in China it is family. Marrying and fathering children, especially sons, are among men's most central duties. By doing so, a man ensures his family is provided for -- something the country's weak social system doesn't do. As such, men who only have male lovers are seen to be failing their duties to their families -- and feel they are betraying them.

There were times when Xiao enjoyed his new freedom after leaving his family. He went for walks in the parks where gay men met and he explored Beijing's gay scene. He was never the type for one-night stands, but once he did let someone take him home. It hurt, but he was happy.

There were also times when Xiao wanted to change. For a while, he worked as a preacher in a church. He believed God could "heal" him. But then he met another gay man at a mass and they became a couple. Spending his days in the pulpit and his nights in the arms of his lover, Xiao felt morally inferior, that he was besmirching God's name.

Xiao fastened a rubber band around his wrist and tugged at it whenever he felt himself desiring men. He wanted to keep traveling, to find himself, but he ran out of money.

During his six months away, Xiao had three sexual partners. When he came back home, his father grilled seafood. Xiao had thought his parents would never speak to him again, but instead they served his favorite food. The gesture touched him.

"I can change," he told them quietly.

Homosexuals have suffered many horrors since the People's Republic was founded in 1949. They were persecuted, jailed and even executed during the Cultural Revolution. Sex between same-sex partners was considered a crime in China until 1997, and homosexuality a mental illness until 2001. To this day, there are fathers who try to beat homosexuality out of their sons and doctors who "treat" homosexual desire with emetics and electroshocks. And there are gay people who take their own lives out of desperation.

When Xiao and Hong married seven years ago, they were both full of hope. Hong hoped to start a family with her childhood crush. Xiao hoped his marriage would cure him of being gay. For the moment, both of them were happy.

Their marriage was a pragmatic one from the start. Xiao lived above his restaurant and Hong lived with her parents -- to be closer to her job, the couple said. Once a week Hong would stay with Xiao, in his bedroom decorated with lace curtains.

Four years ago, Xiao met Lian, a man with a great zest for life, taller and stronger than Xiao. Lian became Xiao's great love. They met because of a motorcycle accident -- Lian had fallen and was hurt, and Xiao held him in his arms and cried. Lian laughed and said, "It's OK. It's nothing." Soon, they began sleeping in Xiao's bedroom above the restaurant. Both men dreamed of a day when they would no longer have to hide.

There are indications that tolerance in China is increasing. In October 2012, two men married for the first time in the southern Chinese city of Ningde and thousands of curious onlookers crowded around to watch them kiss. There is a gay pride parade each year in Shanghai, and a growing number of organizations and self-help groups fight for gay rights.

"I'll Wait Until You're Ready"

But society remains deeply divided. Even in the Beijing gay bar Destination, one of the most liberal places in the country, it's not hard to find men in their early twenties who use websites such as Chinagayles.com to seek partners for marriages of convenience so their families will leave them in peace. "It will be decades before society truly opens," says Stephen Leonelli from the Beijing Lesbian, Gay, Bisexual and Transgender Center.

For Xiao, by then it will be too late.

When Hong told him, "You seem much happier when that man is under our covers than when I'm there," Xiao thought she would leave him. He felt relieved. But then she said, "You're not gay, you're emotionally immature. I'll wait until you're ready for us."

Then Xiao thought about how Hong's family would react to a divorce. In China, divorced women are treated as damaged goods and are rarely able to find new husbands. They risk growing old alone, ending up poor.

"You can sleep with other men if you want," Xiao offered his wife.
"No matter how you treat me, I'm not going to treat you the same way," she replied.

He didn't have the heart to end their marriage.

Soon after that, Hong's desire to have a baby grew greater. For her sake, Xiao went to a clinic to find out about possibilities for artificial insemination. But then he thought, What if we do separate? What will happen to the child? He decided against having a baby.

Just a few weeks later, Xiao found out he had AIDS. His first thought was of Hong: What if he had infected her?

The incidence of AIDS among homosexuals in China is above average, at 5 percent according to estimates from the Chinese Health Ministry. That rate is 88 times higher than among the general population in the country, a disparity that is primarily a result of the taboo against talking about same-sex sexual relationships.

Luckily, it turned out Hong was healthy. She still goes once a week to Xiao's restaurant, climbs the stairs, closes the lace curtains and lies down beside her husband -- who is also still together with Lian. Sometimes, Xiao finds himself wishing Hong would hate him, just so he wouldn't have to feel so guilty anymore.

This article was written as part of the journalist exchange program "Media Ambassadors China-Germany," in which the author took part in the fall and winter of 2012.