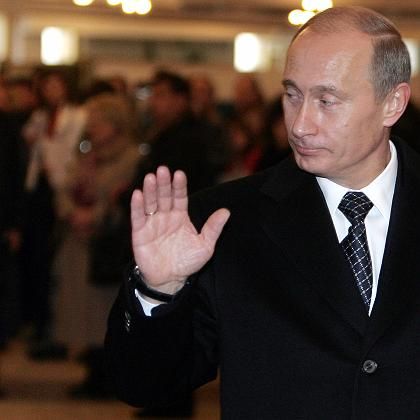 Russian President Vladimir Putin may be happy with the election result but international observers have questioned the legitimacy of the voting process.

International observers Monday cast doubts over the legitimacy of Russia's parliamentary election, describing the voting process as "not fair."

Criticism came from the Organization for Security and Cooperation in Europe, which said Sunday's poll took place in an atmosphere which "seriously limited political competition."

President Vladimir Putin's United Russia party swept to a landslide victory in the elections, gaining 64.1 percent of the vote. Two other pro-Kremlin parties won 16 percent, with pro-Western liberal parties failing to win any seats at all.

The OSCE cited media bias and an abuse of administrative resources in its criticism of the election process. "The State Duma election ... was not fair and failed to meet many OSCE and Council of Europe commitments and standards for democratic elections," the organization said Monday in a joint statement with the Council of Europe.

The statement said the elections had been well organized and said there had been technical improvements in the voting process. "However they took place in an atmosphere which seriously limited political competition," it stated. The observers said the vote was also tainted by an election code which "hindered political pluralism."

The OSCE's main election watchdog cancelled plans to monitor the Duma elections last month after a row with Moscow over delays in issuing visas to observers. As a result of the disagreement, less than 80 politicians from the OSCE and the Council of Europe were charged with monitoring an election taking place at 96,000 polling stations in 11 time zones.

Swedish parliamentarian Goran Lennmarker, who headed the OSCE team, said he was disappointed by the election process. Speaking at a news conference in central Moscow, Lennmarker said: "I thought this would be a step forward in that development, but it was not the case and this makes me sad."

Luc Van den Brande from the Council of Europe delegation said the president and his office had exerted an "overwhelming" influence on the campaign. He also criticized flaws in the secrecy of the vote.

The European Union also voiced its concerns, with External Relations Commissioner Benita Ferrero-Waldner stating that problems had been clear in the run up to the poll. "We saw some violations of basic rights, notably free speech and assembly rights," Ferrero-Waldner said. The commissioner described the earlier pull-out of the OSCE's main election monitoring arm as "very unfortunate."

Election authorities in Russia have dismissed claims the vote was unfair. Vladimir Churov, head of the country's Central Election Commission, said that he knew of no serious violations of the rules, while United Russia leader Boris Gryzlov acknowledged that there had been some irregularities but dismissed them.

Europe joined the United States in calling on the Russian authorities to investigate claims against the election process. German Foreign Minister Frank-Walter Steinmeier said: "I deeply regret that there was no long-term OSCE election monitoring in Russia as was the case in previous years.

"There was only short-term monitoring by members of the parliamentary OSCE committee. So it was clear that there would be doubts as to how the election result came about. And indeed, as you heard this morning, accusations were made that the elections did not happen according to OSCE principles. I expect Russia to look into all these accusations."

German Government spokesman Thomas Steg added: "There can be no doubt. Measured by our standards, it was neither a free, fair nor democratic election."

Putin called the election "legitimate", and thanked voters for a high turnout.

But France asked the authorities to "shine a light" on claims from election observers. A spokeswoman for the French Foreign Ministry said: "We have noted the allegations of irregularities concerning this election, although we are not able to assess their impact on the election result. We hope that the Russian authorities are able to shine a light on these allegations."