SPIEGEL ONLINE: Professor Meadows, 40 years ago you published "The Limits to Growth" together with your wife and colleagues, a book that made you the intellectual father of the environmental movement. The core message of the book remains valid today: Humanity is ruthlessly exploiting global resources and is on the way to destroying itself. Do you believe that the ultimate collapse of our economic system can still be avoided?

Meadows: The problem that faces our societies is that we have developed industries and policies that were appropriate at a certain moment, but now start to reduce human welfare, like for example the oil and car industry. Their political and financial power is so great and they can prevent change. It is my expectation that they will succeed. This means that we are going to evolve through crisis, not through proactive change.

SPIEGEL ONLINE: Several central forecasts you made in the book have come true, the exponential growth of the world's population, for example, and widespread environmental destruction. Your prediction regarding economic growth, namely that it would ultimately cease and the global economy would collapse, has not yet come to pass.

Meadows: The fact that the collapse hasn't occurred so far doesn't mean it won't take place in the future. There is no doubt that the world is changing, and we will have to go along with it. There are two ways to do that: One is, you see the necessity of change ahead of time and you make the change, and the second is that you don't and are finally forced to do it anyway. Let's say that you're driving a car inside a factory building. There are two ways to stop: Either you put on the brakes or you keep going and hit the wall. But stop you will, because the building is finite. And the same holds true for Earth's resources.

SPIEGEL ONLINE: That sounds convincing, but is it really true? Will not private companies react to dwindling resources with innovation in an effort to maintain profitability?

Meadows: The really big changes don't come from inside of established industries. Who made the iPhone? Not Nokia, not Motorola, nor any of the other established mobile phone producers. It came from Apple, totally outside the industry. There are many other examples of this kind.

SPIEGEL ONLINE: What about in areas that are under state control or regulation?

Meadows: That's even worse. Our history with fishing shows that we are destroying the oceans' ecosystems, for example. And we're using our atmosphere as a free industrial waste dump. Nobody has an incentive to protect them.

SPIEGEL ONLINE: Is not the desire for humanity's survival enough of a motivation?

Meadows: You see, there are two kinds of big problems. One I call universal problems, the other I call global problems. They both affect everybody. The difference is: Universal problems can be solved by small groups of people because they don't have to wait for others. You can clean up the air in Hanover without having to wait for Beijing or Mexico City to do the same. Global problems, however, cannot be solved in a single place. There's no way Hanover can solve climate change or stop the spread of nuclear weapons. For that to happen, people in China, the US and Russia must also do something. But on the global problems, we will make no progress.

SPIEGEL ONLINE: Are you not underestimating people and the reaction when our backs are to the wall? Australian businessman and environmentalist Paul Gilding, for example, argues in his book "The Great Disruption" that while a crisis is coming, humanity will mobilize to fight it as seen during times of war.

Meadows: He is right. But will it succeed? It could, if the delays were very short. But unfortunately, they are not. In climate change, for example, the delays are very long. Even if we were to reduce our greenhouse gas emissions to zero today, warming would still continue for centuries. The same is true for soil, which we are destroying globally. Recovery can take centuries.

SPIEGEL ONLINE: Surely technological innovation has served to reduce the impact of some long-term problems. Since your book appeared four decades ago, for example, modern medicine has increased life expectancy and reduced infant mortality rates. New technologies have dramatically increased harvests and computers and the Internet have brought the world closer together and improved access to education.

Meadows: Technology doesn't invent itself. These achievements were the results of decades of hard work, and someone has to pay for these programs. One big source of money is the military. Another is corporations, and they are not motivated to solve global problems, they're motivated to make money. The drug companies in the United States spend more money on hair-loss prevention than on preventing HIV infections. Why? Because rich people go bald and poor people get HIV.

SPIEGEL ONLINE: But imagine the profits that would accrue to the inventor of a new, clean and limitless source of energy.

Meadows: I hope you're not talking about fusion, because that's bullshit. I think we will discover a major new energy source. But afterwards, it would take decades for it to make an impact. Even if there was no resistance, even if there were no environmental impacts and even if it wouldn't make a lot of people bankrupt -- still it would take a long time. So if someone tells you that technology is going to save us just like that, he does not know how technology is developed.

SPIEGEL ONLINE: What about resources. Past forecasts predicted that there would be hardly any oil left by 2012, but there still seems to be plenty available. Recent estimates even show that the US might soon produce more oil than Saudi Arabia.

Meadows: That may very well be. But the oil reserves we are talking about are scarce and very expensive to exploit. And they, too, will be depleted one day. And then we have a problem. Here's an example: I have a neighbor, she's rich. Her electric bill is, let's say, 1 percent of her income. Then comes Hurricane Sandy, and suddenly she had no electricity in her house. Does her quality of life go down by 1 percent? No! Her food is spoiled; she can't turn on her lights; she can't work anymore. It's a disaster for her. Take a look around. The chair you sit on, the glass windows, the lights -- everything is here for one single reason: We enjoy cheap energy.

SPIEGEL ONLINE: Let's assume that you are right and that the collapse will arrive in this century. What will it look like?

Meadows: It will look different in different places. Some countries are already collapsing, and some people won't even notice. There are almost a billion people who are starving to death these days, and people here basically aren't noticing. And there is the issue of speed: The difference between a decline and a collapse is speed. The rich can buy their way out of a lot of things. The end of fossil energy, for example, will be gradual. But climate change will come to the industrial countries no matter what. And the geological record clearly shows that the global temperature doesn't increase in a linear way. It jumps. If that happens, a collapse will occur. But it would be nothing new, of course. Societies rise and fall. They have been doing so for 300,000 years. 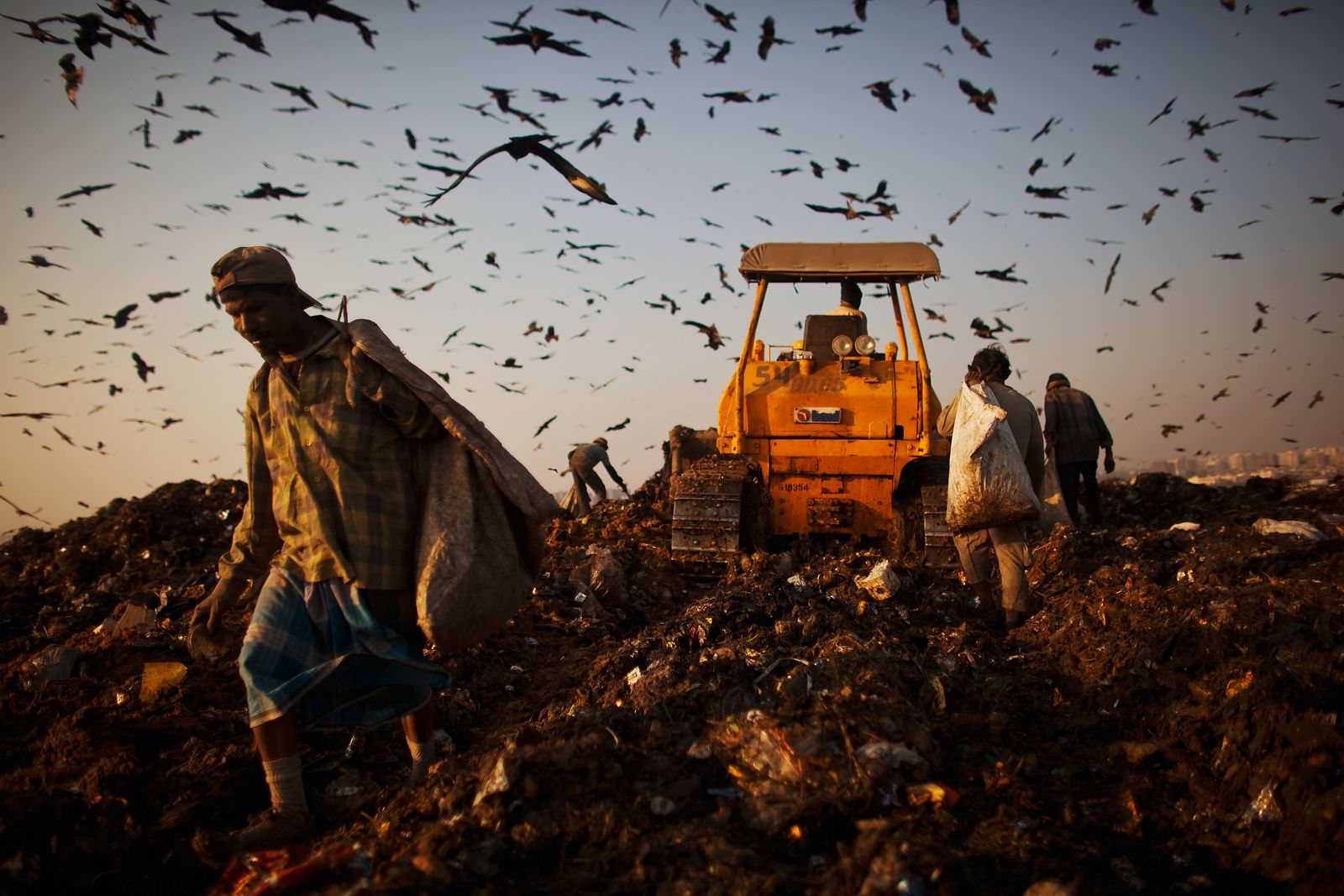 People scavenging at a dump in India: Where are the limits to growth?