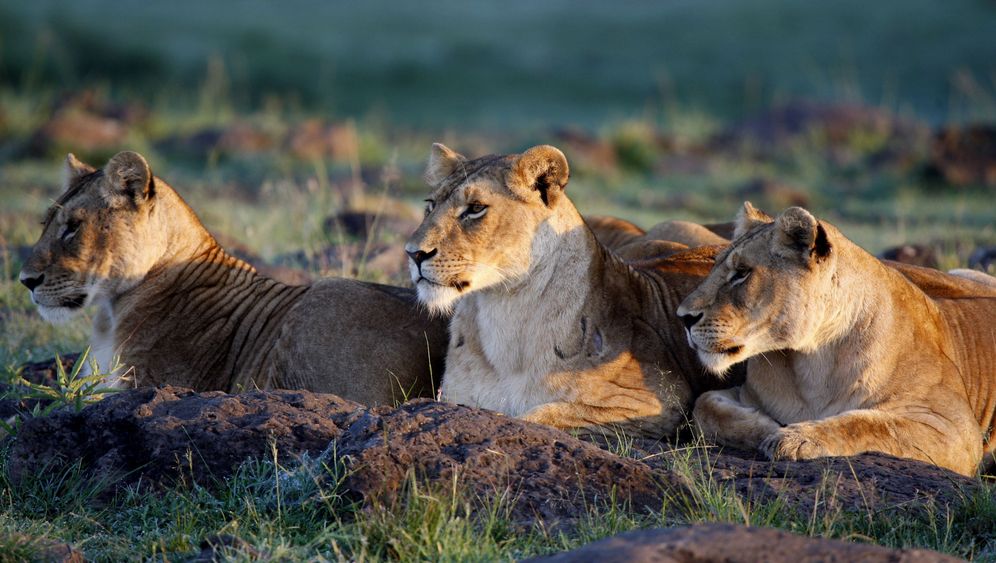 Photo Gallery: A King Without a Kingdom

It's a Sunday in South Africa, and on the green lawn of the Weltevrede Lion Farm, arms reach for a white animal that could double for a cuddly stuffed animal. Visitors are being allowed to pet Lisa, an eight-week-old lion cub with unusual coloring.

Lisa was two weeks old when she was taken from her mother. "To make them manageable you have to do this," explains Christiaan, who is leading visitors on a tour of the grounds.

When cubs are born here, on this lion farm in Vrystaat, a province of South Africa, "each employee is assigned to bottle-feed one of them," says Christiaan. "You can buy a cub for 40,000 rand (€3,400, or $4,455)." A delighted visitor asks whether she can take a lion baby into her room at night. It can be arranged, promises the guide.

Lisa's father, a grown specimen with a stately mane who lives in the enclosure, can be had for about €20,000. Roughly 2,000 lions are kept in captivity in Vrystaat alone, where they are bred for a practice called "canned hunting." It's a diversion that executives at major German companies have been known to enjoy.

The king of the animals has fallen on hard times in his own kingdom. "In all of South Africa, there are almost as many lions behind bars as in the wild," says Fiona Miles of the Vrystaat chapter of the international animal rights group Four Paws, which has been unsuccessful in its efforts to protest the hunting of animals that are somewhat tame and are sometimes even drugged to keep them calm. "As a first step to ban canned hunting," Miles is calling for a moratorium on the breeding of lions.

Across the entire continent, the large African predator, a symbol of strength and majesty, is threatened with decline. Outside fenced enclosures, there is hardly any room left for Panthera leo. Scientists and conservationists warn that the king of the steppes has lost much of his habitat in the last 50 years.

The main reason is the gradual disappearance of the savannah. With shrinking African grasslands, lion populations have declined dramatically. Of about 100,000 lions that roamed the continent's dry grassy plains in the 1960s, there are no more than 35,000 left today, says Stuart Pimm, a professor of conservation ecology at Duke University in Durham, North Carolina. "That's a real collapse in populations."

Pimm and an international team of scientists have just published the alarming results of a new study. "Land use and the transformation of land through tremendous population growth have chopped up and destroyed the savannah," Pimm explains. Only a quarter of an ecosystem that was once larger than the United States still exists today, he says, noting that this shrinkage is almost as severe as rainforest loss.

"It's bitterly shocking," says Thomas Lovejoy, an ecologist at George Mason University in Virginia and a member of the Big Cats Initiative, whose goal is to preserve the world's big cats.

"First we have to know what needs to be protected," says Pimm. To obtain more precise figures on the population of African lions, he and his team compiled the most comprehensive collection of data on African lion populations to date. Both the local population and hunting organizations assisted in the effort. The results were published in the journal Biodiversity and Conservation.

The scientists identified 67 individual savannah zones in which human populations are small enough to allow for the survival of the big cats. Only 10 of them, six in South Africa and four in East Africa, proved to be "bastions" that still offer lions a good chance of survival. Most of these habitats are in protected areas like the Kruger and Serengeti National Parks.

The decline of the lion began long ago. In fact, German zoologist Alfred Brehm began observing it more than a century ago. "The days when 600 lions could be brought together to fight in an arena were thousands of years ago," he concluded. During the reign of the Roman Emperor Hadrian, up to 100 lions died in a single event. Pompey the Great exhibited 600 lions, while up to 400 were sent to the arena under Caesar. "But it wasn't until the invention of guns" that the animal, a dangerous threat to livestock herds, was "pushed back and eventually exterminated" everywhere, Brehm writes in his book "Brehm's Life of Animals." Hunters, like the legendary Jules Gérard, had rid North Africa of the supposed plague of Berber lions, and Morocco's last lion was shot to death in 1920.

South of the Sahara, man also proved to be a relentless foe of the tawny-coated predator. To this day, nomadic tribes like the Massai retaliate against the hated killers of their livestock by shooting the animals or setting out poisoned bait.

But the hunt engaged in by former colonial rulers and their successors also has other dimensions. Over a period of three years, his great-grandfather Harold "shot over 400 lions as well as numerous leopard," boasts Simon Leach, who operates Eagle Safaris in Harrismith, South Africa. On his website, Leach bills himself as a "hunter and conservationist," and notes: "Eagle Safaris continues this proud tradition and draws on the skills and expertise gained over the years." Inexperienced hunters, including those who require multiple shots to kill an animal, are just as welcome as professionals, and a hunting license is not necessary.

International conservation groups are sharply critical of trophy hunting, which they say is partly to blame for the acute plight of the lion. The business, which is booming in South Africa and Tanzania, in particular, is hastening the decline of the big cat, they warn in a petition to the United States Department of the Interior. Commenting on the extensive studies, Jeffrey Flocken of the International Fund of Animal Welfare (IFAW) says: "Many people will be shocked to know how quickly the numbers have fallen."

Flocken and his allies want to see the African lion listed under the Endangered Species Act (ESA), a US law designed to protect endangered animals. US citizens make up by far the largest number of trophy hunters. The lion currently has limited protection under the Convention on International Trade in Endangered Species (CITES).

Americans are especially fond of bringing home stuffed lion heads, paws and tails from Africa. Other important importers include Germany, along with Spain and France. Lion parts are also sent to other countries from the United States. The animal's bones are prized in China to make "tiger wine," which the Chinese believe has healing properties, and are used as a replacement for tiger bones, which have now become rare.

According to the petition, the body parts of at least 5,660 killed lions were traded internationally between 1999 and 2008.

The consequences of hunting tourism are often fatal for the entire pride. Hunters covet the magnificent mane and therefore primarily target older, dominant males, which leads to a rise in deadly attacks within the pride. To sire their own offspring, other male lions kill the cubs of their former rival, and sometimes even the mothers, when they try to defend the cubs.

To avoid this additional killing of lions, trophy hunters must be taught to correctly estimate the age of their prey, says wildlife biologist Craig Packer of the University of Minnesota in St. Paul. But his appeals apparently fall on deaf ears. "Mr. Lion," as the renowned lion expert is known, is not against hunting in principle, he says, but notes that quotas need to be drastically reduced.

A Disaster for Africa

If we don't act now, the African lion could become extinct, conservationists warn, and the US Fish and Wildlife Service appears to be taking them seriously. The agency is said to be reviewing the possibility of adding the lion to the ESA list, to the consternation of the African hunting and tourism industry. Such action could result in the loss of 60 percent of the trophy market, Alexander Songorwa, director of wildlife for Tanzania's tourism ministry, wrote in the New York Times. It would be a disaster for his country, he added.

At its convention in April, the organization Wildlife Ranching South Africa (WRSA) characterized efforts to list the lion under the ESA as "sabotage." The country's roughly 10,000 private farmers are proud of the "the tremendous growth in the South African wild animal industry," WRSA notes. The industry produces and offers what its trigger-happy customers covet: Kudu, buffalo, impala and other antelopes, and the more costly lions for well-heeled hunters.

Because they value tourists who prefer to shoot wildlife with their cameras over big-game hunters, lion countries Zambia and Botswana are now trying to save their main attraction. Although it generated $3 million (€2.3 million) in annual revenues, Zambia has now outlawed the hunting of lions and leopards. And in Botswana, the country's final hunting season has just begun.

Experts disagree over the best ways to help the beleaguered animal. Pimm stresses cooperation with local inhabitants, saying that they need to learn how to protect their herds more effectively, and that children should be taught how to behave around the predators while still in school.

"Mr. Lion," on the other hand, has lost patience, after 35 years of field research. He no longer believes in the peaceful coexistence between man and lion. Packer argues that it would be more effective to separate the two species by creating more fenced-in sanctuaries.

Packer fears that populations remaining outside such enclosures will be reduced by half in 20 to 40 years. To conduct their study, he and his 57 co-authors determined that it would be much cheaper to establish protective enclosures in 11 African countries than to create management programs for people. Besides, he adds, this approach is measurably far more beneficial to the threatened animal. Lion populations in enclosures, he says, have proved to be "larger and more dense."

In Vrystaat, Four Paws has erected one such enclosure to create a 1,200-hectare (2,965-acre) sanctuary for big cats. A family has just found refuge there. After being released from their shipping containers, a male lion, his lioness and two cubs are able to feel grass under their paws and the African sun on their pelts for the first time.

The four new arrivals came from a Romanian zoo, which had violated a European Union guideline that would have required it to provide the animals with 500 square meters of space by providing them with only 40. More than 80 lions that had been living a miserable existence in European circus cars and small zoos can now lead a humane life in Lionsrock. But after being raised in captivity, the animals would be lost in their ancestral habitat, says Hildegard Pirker, the attendant in charge of the animals. "Releasing them into the wild isn't an option." Their bleak existence in captivity has made the animals incapable of living in the wild.

Pirker, who is also a veterinarian, performs vasectomies to ensure that the powerful cats don't reproduce. "The surgery makes the lions infertile," says Pirker, "but it preserves their sex drive and growth of the mane."