German Finance Minister Peer Steinbrück is known to keep a tight rein on his ministry. His nicknames among his staff -- "Supeer" and "Peerfect" -- attest to the respect his employees have for their boss. Yet with less than a week to go before Germany's general election on Sept. 27, Steinbrück's two highest-ranking civil servants, Jörg Asmussen and Werber Gatzer, are being disobedient.

The reason for this ministerial mutiny? They're angry that Steinbrück and Social Democratic Party (SPD) leader Frank-Walter Steinmeier are pushing for a global tax on all financial transactions. Steinbrück grandly announced the topic would be on the agenda of this week's G-20 summit in Pittsburgh on Sept. 24-25. And yet just a few weeks ago he was against such a tax. His ministry has also been firmly against the idea up until now.

They may belong to the same political party as their boss, but Asmussen and Gatzer clearly aren't prepared to sacrifice the Finance Ministry's traditional stance -- much to the dismay of the SPD's campaign strategists. An e-mail Asmussen sent to his colleagues in the Finance Ministry's international department is currently doing the rounds at SPD headquarters. In it he says the transaction tax is "the SPD's position, not that of the Finance Ministry," adding "Gatzer and I opposed the contents of the proposal."

Steinbrück and Steinmeier won't only be facing opposition to their plans at home. The Germans are also likely to get a very lukewarm reception to their idea at the G-20 summit. Although German Chancellor Angela Merkel has backed the proposal, the draft communiqué for the Pittsburgh meeting contains no mention of a transaction tax -- a clear indication that the suggestion has no chance of making it on to the agenda at the summit.

The omission is due to more than the fact that Britain and the United States traditionally reject such a tax. The negotiators for the world's 19 leading developed and emerging countries plus the European Union, who will be working from Tuesday onwards to lay the groundwork for their bosses' meeting later in the week, simply don't have time to add yet another item to the agenda.

The differences of opinion on the other items up for discussion, which range from future economic policy to tightening the rules on capital reserves for banks, are already too big. Indeed it's quite possible the Pittsburgh summit will end in a similar fashion to its predecessor in London six months ago, namely with a few well-chosen but nebulous soundbites that gloss over the fact that the world's most important industrialized nations are at loggerheads over how best to manage the global economy.

Just a few months ago, when they were being pummeled by the global financial crisis, the G-20 nations were united in the belief that the world's economies needed a fundamental overhaul. But with every piece of good news about the global economy and every new economic indicator that suggests things are picking up, the pressure to act diminishes and radical changes seem less and less urgent.

Hanging over all of this is the same fundamental conflict that overshadowed the London summit, namely that Britain and the US want to crank up global demand and growth while the continental Europeans are more concerned with regulating the financial markets. Unless the delegates in Pittsburgh can reach a compromise, there may be dire consequences. New trade disputes could arise which would further weaken the already poor prospects for growth.

The disagreement can be seen in the wrangling over how to set international limits on bankers' bonuses. According to German government representatives, most of the delegations have criticized the "insufficiently ambitious ideas of the US chair." To put it less diplomatically: The Americans are stonewalling.

Plans to set a concrete upper limit for variable compensation were thrown out by the negotiators months ago. After all, a million-dollar bonus is worth far more in China, India or Brazil than in Britain and the US. For this reason the Germans would ideally like to set an adjustable ceiling, for instance by capping variable remuneration at two or three times the size of an employee's fixed salary. However, Merkel and Steinbrück have garnered little international support for their idea. At a preparatory G-20 meeting, only France and the Netherlands were willing to back such a move.

Nevertheless, the G-20 wants to work towards linking compensation to "long-term value creation, not excessive risk-taking," according to a draft summit communiqué the American hosts sent to participating governments. According to the text, there should be a requirement that "a significant portion of compensation ... be deferred." The document also includes a "clawback" provision that would force bankers to pay back bonuses if the company's results later fail to meet expectations.

A Long Way from Consensus

Other efforts to improve financial regulation appear to be making better headway, but are still a long way from being ready for a final agreement. For example in the draft communiqué, the G-20 nations pledge to "improve both the quantity and quality of bank capital and to discourage excessive leverage." Banks are currently required to set aside about 8 percent of their capital to secure their risks. There has been talk within G-20 circles of doubling that amount.

Although a specific figure won't be on the table in Pittsburgh, the G-20 members want to commission studies looking into the consequences of different scenarios based on different levels of capital requirements. Major banks -- those that are famously "too big to fail" -- will also be subject to addition capital requirements so that, in the event of their collapse, they do not bring down the whole financial system with them. Governments hope this will prevent financial institutions from growing to an unmanageable size.

Another issue that is comparatively uncontroversial is the proposal that member states should oblige their banks to set money aside in good times to cushion the negative impact of a downturn. The G-20 also wants to stop the uncontrolled trading of derivatives. The aim is to make sure that these controversial financial instruments are "traded on exchanges or electronic trading platforms and cleared through central counterparties by end-2012."

In contrast, there is only superficial agreement on the second key focus of the G-20 summit, future economic strategy. At Chancellor Merkel's behest, a task force was set up in June to draw up a "charter for sustainable economic activity." After debating the matter at length, negotiators agreed on a list of eight core values which the G-20 nations should use as a basis for their economic policies. However the values have deliberately been kept very general. The list ranges from taking responsibility for long-term economic policies aimed at stability, to rejection of all forms of protectionism, and demands for better financial oversight. The G-20 nations also want to commit themselves to ensuring economic growth does not come at the expense of the environment.

The question of how such growth may be achieved is still hotly debated. On the one hand the G-20 states agree national economic policy should in the future be coordinated internationally with the help of the International Monetary Fund. On the other hand the established industrialized nations in particular are squabbling about inequalities in global trade, that is, trade deficits and surpluses.

The dispute centers on the question of how world trade can be put back on the rails. During talks in recent months, the US and Britain urged net exporters like Germany to introduce state stimulus programs to boost domestic demand. The idea is that increased public spending and higher wages will encourage consumers to buy more. This would raise imports while at the same time decreasing Germany's competitiveness on the international level, thus lowering the country's trade surplus. London has even made this a "key issue" for Pittsburgh, and put forward its own paper to this end. It wants the IMF to step in and provide countries with economic advice whenever a trade imbalance exceeds certain set parameters.

As expected, the idea has met with bitter resistance from Berlin. If such a plan were put into practice, high-wage Germany would lose one of the pillars of its prosperity. It's little wonder, then, that Angela Merkel has spoken of "complicated negotiations."

In spite of all the discord and the difficulty of coordinating negotiations between such a large group of participants, the US is determined to stick to the G-20 concept -- and perhaps even expand it. In talks with the EU, Japan and Canada, Washington has already suggested scrapping the G-8 -- the well-established forum of the world's seven largest industrialized nations and Russia -- as early as next year.

The US envisions the next G-20 summit taking place in Canada in early 2010 with South Korea as chair. Then, too, there will surely be no shortage of issues for world leaders to discuss. 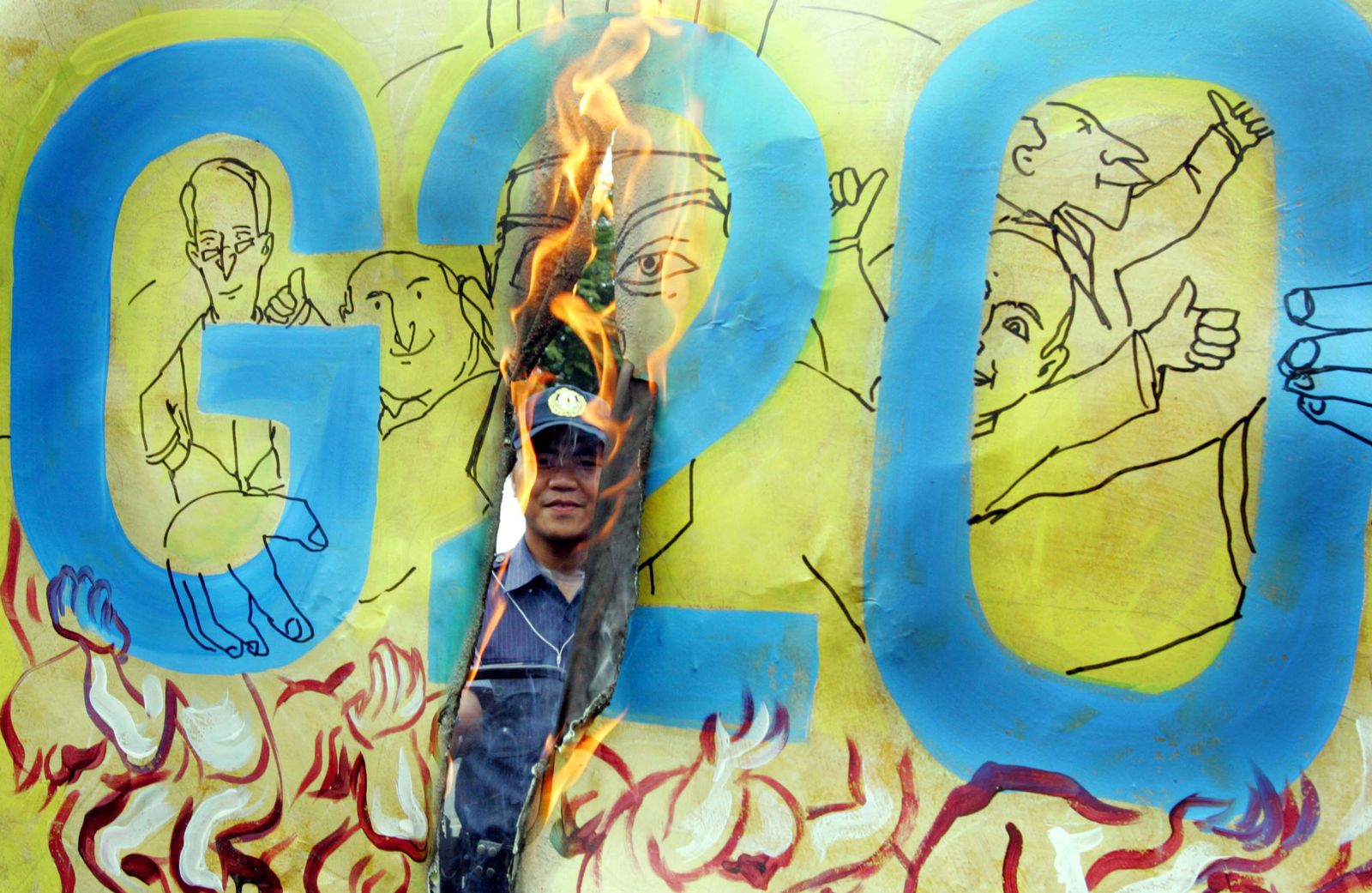 Protesters burn a placard during an anti-G-20 rally on Tuesday, Sept. 22, in Manila, Philippines.