The city of Yenakiieve, northeast of Donetsk, was founded more than a century ago around a steel mill. Some 10,000 people work at the steel mill, and the company that owns it operates the most modern rolling mill in Ukraine. But as of March, the mill became a thing of the past.

On the morning of March 1, armed men arrived at the plant, demanding that management submit to the regime of the "Donetsk People's Republic." If they refused, the men said, "legal and physical measures" would be taken against management and employees. What seemed like a farce at first would prove to be a major political move. In doing so, the pro-Russian separatists in the eastern Ukrainian People's Republics of Donetsk and Luhansk have divided the country even further.

The nationalization of Ukrainian companies was a violation of the Minsk Agreement. As part of the 2015 accord, the parties to the conflict agreed to preserve Ukraine's territorial integrity. But it would not be the last violation. Last week, the separatists took the step of proclaiming their own state, calling it "Little Russia." Before that, Russian President Vladimir Putin had indirectly threatened to recognize such a state.

Since the spring of 2014, the regions have been occupied by pro-Russian rebels, who seceded from Ukraine with Russian support. It was a serious blow to Ukraine, especially from an economic standpoint. Until then, eastern Ukraine had been responsible for a fifth of the country's entire industrial production. There are hundreds of mines in the region, together with Europe's largest coking plants, important nonferrous metal and chemical plants. Much of the country's electricity had also been generated in eastern Ukraine.

Although the separatists took over city halls and police stations in a coup three years ago, the large companies initially remained in the hands of their Ukrainian owners. They continued to produce as if nothing had happened. The separatists tolerated this because the businesses provided tens of thousands of jobs in the people's republics. There was fighting at the front, but Ukraine continued to supply iron ore to the separatist region. In return, for three years, trains filled with anthracite traveled from the separatist region across the border, destined for Ukrainian thermal power plants.

The system worked until early this year, when Ukrainian nationalists put a stop to deliveries of goods in both directions. Trading with the enemy, they said, was tantamount to "funding terrorism." Because Ukrainian President Petro Poroshenko didn't dare to break up the blockade, he declared the suspension of trade. In doing so, he provided the separatists with an excuse to cut themselves off even further from Ukraine.

It was a major turning point in the history of the war in eastern Ukraine, a conflict already known for its twists and turns. Soon afterward, the people's republics nationalized 53 Ukrainian companies in their territory. Russia supported the takeover. Moscow could "understand, to a certain extent" the "temporary administration" of the businesses by the governments of the people's republics, Putin's spokesman said.

Most of the plants that have now been nationalized are part of the empire of Ukrainian oligarch Rinat Akhmetov. He was not only forced to write off the Yenakiieve steel mill, but also another steel mill, two coking plants, a pipe mill, three large coal mines and a thermal power plant, as well as the stadium in Donetsk he had built for the 2012 football European Championship. His losses run into the billions.

The management of the affected plants refused to agree to the separatists' conditions. They stopped production and the workers were sent home. The top managers left for Ukraine on March 1. What has happened to the companies since then? Have the separatists placed them back into operation? And if so, where are they getting their raw materials from and where are they sending the steel and coke they produce?

It's difficult to find answers to these questions. The people's republics are providing no information, and Russia acts as if it has nothing to do with it all. It is also unwilling to provide proof that the occupied territories are surviving exclusively on Russian assistance. The events surrounding the nationalized companies are one of the best-kept secrets of the people's republics.

The authorities in Donetsk are particularly averse to journalists these days. Our request for accreditation was denied by the Information Ministry in March, in an email that read: "The accreditation of the Der Spiegel journalists in the Donetsk People's Republic is denied." Accreditation had been issued in previous years. And without the necessary documents, it is no longer possible to pass through the checkpoints at the line of demarcation.

The separatist territories are also increasingly difficult to reach by telephone. Using WhatsApp, we finally manage to contact one of the best-known men in the Donetsk Republic, Alexander Khodakovsky, the former military head of the republic and commander of the Vostak ("East") militia battalion, and later the head of state security and a member of the separatist parliament.

A year and a half ago, Khodakovsky quarreled with the Donetsk leadership. Today he is primarily involved with his movement, the Patriotic Forces of the Donbass. He says he's concerned about developments in his republic.

"We are experiencing growing losses at the front," he says, adding that the military situation is deteriorating. What soldier is willing to risk his life for 15,000 rubles a month, or about 220 euros? "Without Russia, Ukraine would have strangled us long ago."

Khodakovsky says he was opposed to a premature nationalization of the Ukrainian plants. Some 100,000 people were employed there, "a tenth of our population." The takeover of the companies "was a spontaneous decision."

So, who's in charge of the campaign? All the plants, he says, were placed under the control of a company called Wneschtorgserwis. It is registered in South Ossetia, the small Caucasus republic that was de facto taken over by Russia after the 2008 war against Georgia. This approach was used to cover up what was happening in the nationalized plants and Moscow's role in the matter, he explains, adding that it was necessary to avoid the imposition of international sanctions on the companies involved.

Khodakovsky says entire factories are being dismantled and sold to Russia, including the equipment from the October mine. "Of course, Mr. Surkov exerts a great deal of influence on what is happening here," says Khodakovsky. "I would say he is the leading figure here."

Vladislav Surkov, the former chief ideologue at the Kremlin, is now Putin's personal adviser and his envoy to the people's republics. He never made an appearance at the Minsk negotiations over Ukraine, but he has turned up in Donetsk and Luhansk. Western diplomats say that nothing functions without this man, which is why they meet regularly with Surkov in his office in the presidential administration on the Old Square in Moscow. Their last meeting with Surkov was in June.

There is little information available about Wneschtorgserwis. No one knows who runs it and how it is structured. It is known, however, that the company has reportedly delivered 140,000 tons of iron ore to steel mills in the Donbass region since April, for $18 million, and that it has begun exporting steel to Russia from there, as well as anthracite from the mines.

Wneschtorgserwis does have a PR representative. His name is Viktor Nikolayenko and he can sometimes be reached via the internet. Nikolayenko promised to smuggle DER SPIEGEL journalists into the separatist region and open a few plants for a visit. But then he went silent for weeks until, in May, he finally wrote that Moscow had strictly forbidden any interaction with the press -- yet another indication of where the decisions are made.

We did at least succeed in obtaining details about the true situation in the confiscated plants. When the people's republics took over the factories in March, officials said they would be "up and running again within two months." But almost nothing has happened to date. The plants lack competent managers, raw materials and funds. At first the workers were still being paid 90 percent of their wages, but now more and more are complaining about severe cuts.

In early June, the Donetsk Republic decided to stop pumping water out of several mines and to dismiss the miners. Even in mines still in operation, like the Sassyadko mine in Donetsk, workers are pressured to quit, while others are advised to join the people's militias. The working week in government-owned coal companies was reduced to two days on July 1, and wages were reduced by more than half. The confiscated Donetsk smelting works has suspended operations because diesel fuel is no longer available. And the situation in the vicinity of the wagon manufacturing plant in Stakhanov is now so dramatic that the management requested 1,500 food packets from the leadership of the people's republic.

Dennis Denissov admits that Russia needs neither the steel nor the coal from the Donbass mines, which is what makes the situation so dramatic. Denissov is close to the deputy head of the government in Donetsk, who controls the nationalized companies. He works for a foundation that organizes assistance for the Donbass region from Moscow. He also promises to provide access to the people's republics.

Dennisov says it was "a political decision" for Moscow to provide the affected companies with a loan for 10 billion rubles. Given that Russia doesn't want to buy the separatists' products, other buyers need to be found. He says there are potential buyers in the Baltics and in Serbia. The products are shipped through the Russian Black Sea port of Novorossiysk -- with forged documents to conceal their origin.

However, the Russian support has not eased the situation. In mid-July, Oplot ("Bullwark"), the separatists' television station, announced that the leadership of the Donetsk Republic had established a commission to search for solutions for the affected companies.

At almost the same time, Denissov contacted DER SPIEGEL once again, saying that he had had to complete a security inquiry in Moscow first. Unfortunately, he added, the outcome was negative: "You are not welcome in the territory of our republic." Eastern Ukraine, it appears, has become terra incognita. 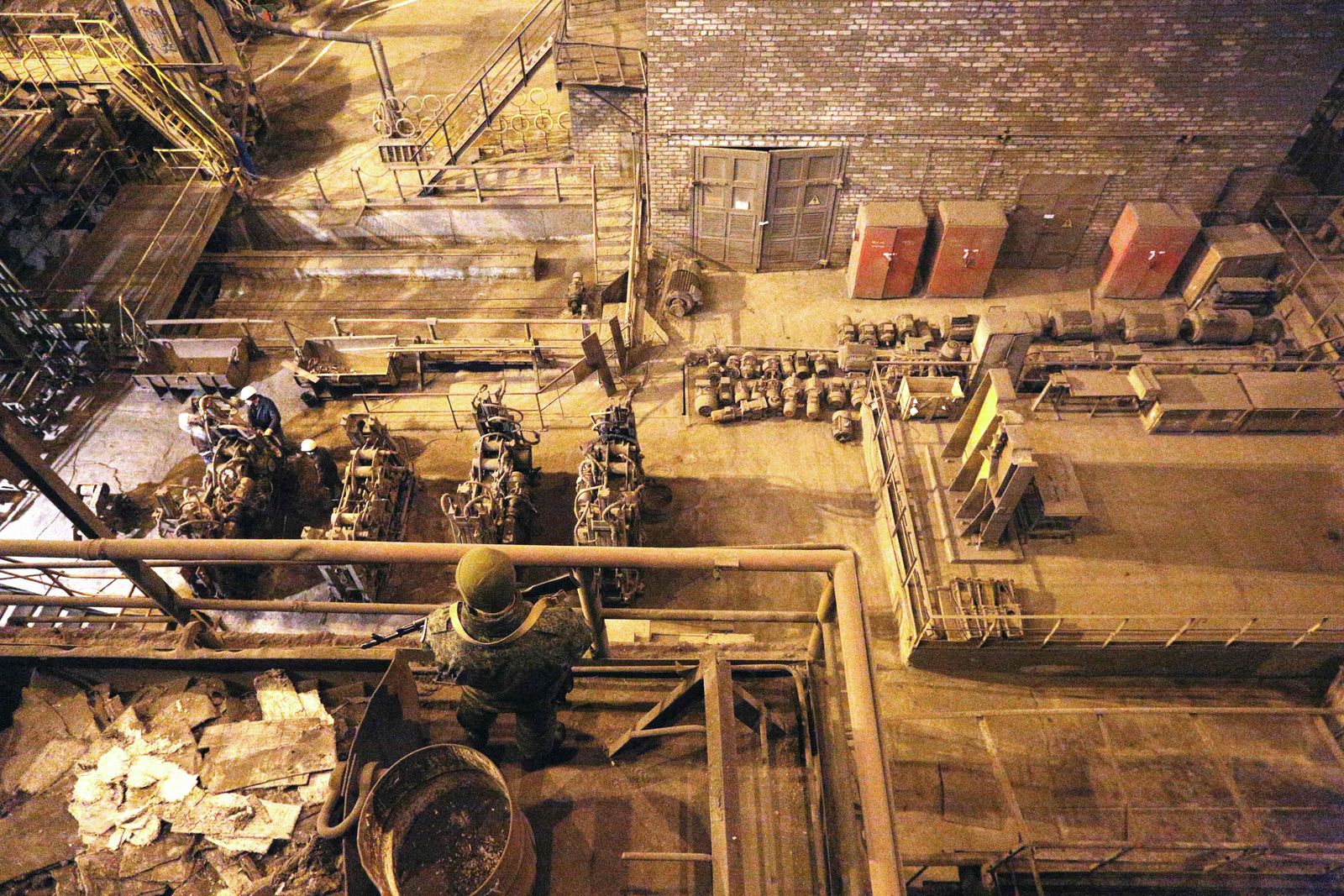 A pro-Russian rebel guards as workers work at the Uzov Metallurgical Works in Donetsk.