A few short months ago, it seemed almost inconceivable that the UN Climate Change Summit in Copenhagen would end with anything less than a binding, legal agreement. The political pressure on the industrial states was too great, the expectations of their inhabitants too high.

"There is no Plan B," was the Danish Environment Minister Connie Hedegaard's mantra -- and the rest of the world seemed to signal its agreement, even if only in a murmur. And when world powers attending the G-8 summit in L'Aquila, Italy, in July agreed on ambitious targets for greenhouse gas emission reductions, it seemed to indicate that a positive outcome from the international climate change negotiations was actually a realistic option.

However, in the meantime, something else has become clear: Success is measured by the goals one sets. And that goal was re-defined on Sunday. At the Asia-Pacific Economic Cooperation (APEC) summit in Singapore, 17 heads of states and government -- including ones from China, Russia and the US -- destroyed all hopes of setting internationally binding climate targets in Copenhagen. Even the agreement to halve carbon dioxide emissions by 2050 that was agreed upon in L'Aquila has been sidelined. Now, the only possible result of the Copenhagen talks will be a "politically binding agreement." According to the latest plan for the summit, a formal, legal agreement would then be reached at a later stage.

Climate Talks: A Failure Before They Even Start

Even before the summit starts on Dec. 7, the climate talks already look like they will be a failure -- at least, if one considers what the original goal of the talks was. At the end of 2007, at a summit on the Indonesian island of Bali, the United Nations decided that a follow-up agreement to the Kyoto Protocol, which expires in 2012, had to be reached within two years -- and that its follow-up would be finalized in Copenhagen. The fact that this will no longer happen is "more than deplorable," according to climate researcher Hans Joachim Schellnhuber, who is part of the German delegation heading to Copenhagen.

Still, top UN climate diplomat Yvo de Boer remains optimistic. "Copenhagen can and must deliver clarity on emission reductions and the finance to kickstart action," says de Boer, who is head of the UN's Climate Change Secretariat in Bonn, referring to the financial aid that developed nations will offer developing nations to help them deal with climate change. "I have seen nothing to change my view on that."

'The Hour Of Realism' Is Nigh For Climate Change Negotiations

At a last informal meeting in Copenhagen before the summit begins, environment ministers from more than 40 countries are currently discussing what can be salvaged from the talks. De Boer is there, as is Germany's new environment minister, Norbert Röttgen, who testifies to the "strong will of the participants to make Copenhagen a success." Indeed, the hopes for a global agreement on climate change do not seem completely dashed quite yet.

"This is the hour of realism," Susanne Dröge, from the German Institute for International and Security Affairs (SWP), told SPIEGEL ONLINE, adding that it was about time that high expectations for the summit were adjusted. "Having someone say all that publicly was long overdue," she notes, adding that the high expectations had weighed heavily on the negotiators in the run-up to the summit. "Now, some of the pressure that was building up has been relieved. If that had happened in Copenhagen, it would have been much worse."

Christoph Bals from the environmental organization Germanwatch agrees. He thinks the summit might achieve a reasonable result -- and not just a vaguely worded closing statement. "There could still be a legally binding agreement," Bals told SPIEGEL ONLINE. It's been clear for a while that the December talks were not going to produce any kind of final international treaty that nations could simply ratify, he says. But there is still a chance that Copenhagen can help the world take a big step in the right direction, Bals feels.

Among observers, the consensus is that, in order to achieve that sort of success, three points must be agreed upon.

"Denmark is working hard to ensure a successful and ambitious outcome from Copenhagen," Danish Environment Minister Connie Hedegaard told SPIEGEL ONLINE. Over the past few months, she has been traveling around the world to push for a result in Copenhagen that now seems unlikely to happen. Nevertheless, she describes the new Danish plan to come up with "politically binding" agreements, rather than legally binding ones, at Copenhagen as the right approach.

But those "politically binding" agreements could also end up just being non-binding declarations of intent without a concrete schedule or any real details. Which of the alternatives eventually emerges from the talks seems to be open at the moment. "I currently see the chances as 50-50," Bals says.

The One Goal Copenhagen Must Achieve

Nevetheless, Hedegaard seems ready to fight for her desired result. "Copenhagen should include a deadline for when to close a legally binding agreement," she maintains.

Sweden's special envoy for climate change, Lars-Erik Liljelund, feels similarly. His country is going into the discussions holding the six-month rotating presidency of the European Union. He agrees with the Danish strategy. "We support this since we think it is important that (Copenhagen) delivers," he told SPIEGEL ONLINE. However, it's already been clear to him for six months that the conference was not going to result in any legally binding treaties, he says.

The Europeans have certainly done their bit to lower expectations of the Copenhagen talks. The main problem has been that the EU nations cannot agree on how much money developing countries should get to help them adopt any climate change objectives (also known as "adaptation" in the official jargon) and to reduce their greenhouse gases ("mitigation"). However financial aid to help deal with climate change is a central demand from the side of the developing countries.

Environmentalists don't even want to think about what might happen if Copenhagen's only result is a non-binding statement of vague intent. If we want to keep global warming to within two degrees Celsius -- in other words, the amount of warming whose effects, in the opinion of scientists, can still be halfway controlled -- then there can be "no alternative" to a binding agreement, says Stefan Krug, head of the political unit for Greenpeace Germany. "Anything else would represent a total failure of the Copenhagen negotiations," he concludes.

APEC Announcement Could Be Positive

Observers are unsure how to interpret the setback announced by leaders at the APEC summit. An optimistic reading of events would be that the countries involved want some extra time because they are serious about reaching a strong and binding agreement.

"It would not make any sense to agree on an international treaty that represents the lowest common denominator," Schellnhuber argues. "It would be better to reach an agreement later which had more ambitious targets."

Dröge agrees. "There's no point in pushing for something in Copenhagen that is just going to be overturned by the US later," she says.

However, a more negative interpretation of events would be the following: The US and China have secretly agreed to do as little as possible regarding climate change for the time being. Observers suspect that a simple calculation could lie behind this scenario: As long as one side can plausibly accuse the other side of sabotaging the negotiations, nobody will suffer any significant political damage. "Under this scenario, you can imagine that the US Senate and China will act together to torpedo any agreement," Bals says. In Washington, a far-reaching climate change bill has been bogged down in Congress for months.

Or is it all just a clever ploy? Is the sobering outcome of the APEC summit already a tactic in the Copenhagen negotiations?

"China and the US have more room for maneuver than they are currently admitting," Krug says. "Obama could actually already agree to legally binding objectives for CO2 emissions without waiting for Congress. He could also make financial promises to developing nations and make those commitments dependent on greenhouse gas reductions." The hope remains that, in the end, Obama will give some ground because he will otherwise face potential political damage at home.

The ironic thing is that global warming is apparently slowing down. "Psychologically, that is of critical significance," Schellnhuber says.

Admittedly, any half-way informed politician will know that the stagnation in global warming that is currently being observed can only be temporary. As late as 2007, global warming still had a signficant influence on the political debate, Schellnhuber says. "But public pressure has decreased in the meantime," he concludes. 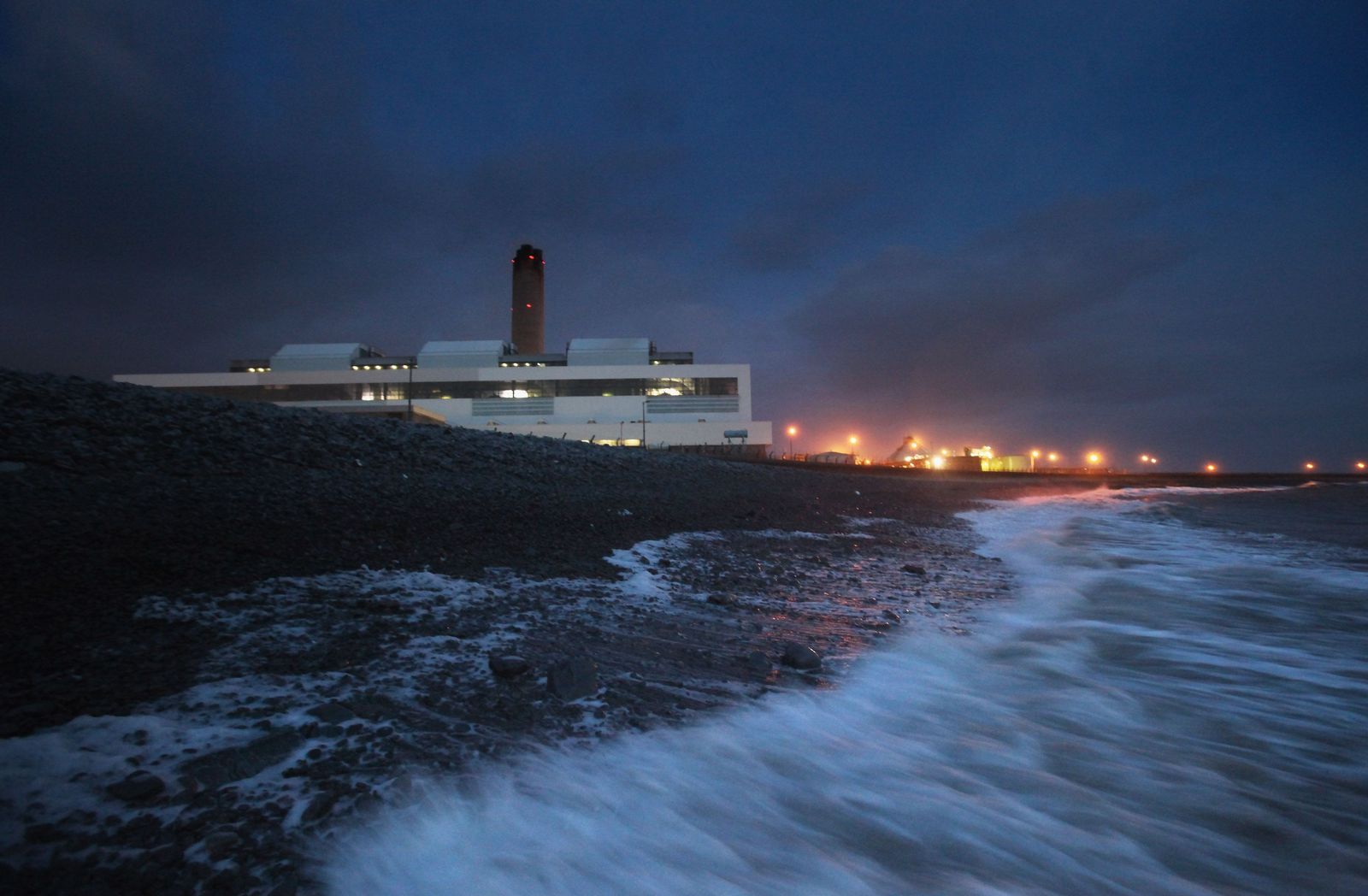 A power station in Wales: Nobody wants to sign any kind of binding treaty at the upcoming climate talks in Copenhagen in December.