The convention of the pro-Kremlin United Russia party had barely ended, and the stage at Moscow's 500-year-old Gostiny Dvor Arcade on Red Square had not yet been dismantled before outrage began to surge through the American media and political circles in Washington.

The New York Times called it Putin's "cynical game" and a "crass political manipulation," one that would have the opposite of its intended effect and would come to haunt Russia. Even the usually reserved Secretary of State Condoleezza Rice was quoted as saying that the concentration of power in Moscow was "concerning." Her deputy spokesman, Tom Casey, added, as a warning, that America would now be keeping a close eye "on how the political process develops, how the elections develop there."

Casey was referring to the Dec. 2 parliamentary elections in Russia, in which about 105 million Russians will be eligible to vote. It is an election that will likely set the course for the future political career of Vladimir Vladimirivich Putin.

The shrewd Russian president scored his latest tactical coup on Monday of last week when, at the United Russia party's convention, he indicated that he might be a candidate for the post of prime minister. He told the assembled delegates that he was "grateful" for their proposal to present United Russia's election list. Putin's comments were met with several minutes of applause.

The most paradoxical aspect of the election is that, eight weeks before Russians go to the polls, the outcome is already a foregone conclusion. Observers agree that after Putin's speech last Monday, his artificial party will capture at least two-thirds of the seats in the Duma, the lower house of the Russian parliament. The president will receive the top mandate and, later on, possibly the office of prime minister. This, Putin told his audience with a nod, was "certainly a realistic proposal."

Is this a way for Russia's most powerful man to become his own successor after clearing his office when his term as president comes to an end next spring? Will he manage to remain in power, without amending so much as a word of the constitution, by suddenly turning the position of prime minister -- a more or less meaningless position under Putin -- into the country's most powerful political office?

Although the timing and form of Putin's public offering may be surprising, the "prime minister option" itself wasn't unexpected. For months it had been treated as a possible way to ensure that the Putin system continues beyond May of 2008.

The Americans were fully aware of this. Their thinly veiled threat to expose the Russian elections as rigged is just as ineffective as the temporary outburst of indignation in Washington. In a country in which 66 percent of citizens -- and an even larger percentage of women and rural residents -- actually want Putin to continue to play an "active political role," there is no need for anyone to stuff the ballot boxes. "People like his ideas," Putin loyalist Vladimir Yakunin offers by way of explanation of the president's enduring popularity.

American Disquiet at the Reemergence of a Strong Russia

The appeal by the delegate Yelena Lakshina, a textile worker from the central Russian Ivanovo region, to the "many bosses" at the convention center to "think of something" to allow Putin to remain in power was obviously a stage-managed performance. But in contrast to the staged party conventions of the Brezhnev era, Ms. Lapshina's outburst didn't appear to be some mindless recital of the party line. It was, presumably, heartfelt -- and it was real.

What infuriates America is the way in which Putin manages to perfect his virtual form of democracy without making himself vulnerable to attack. And what also has Washington seething is the fact that the Russia reemerging on the international stage is a country that until recently seemed incapable of giving satisfaction, but now has little need for American sympathy and is, in fact, constantly trying to thwart the Bush administration in world politics, be it in Kosovo, Iran, the Middle East or when it comes to the issue of missile defense.

Against a backdrop of large banners emblazoned with the words "Putin's Plan, Russia's Victory," the president raised the hopes of the party delegates at the Gostiny Dvor Arcade that their country would continue to improve its position in the world, including its military strength. The modernization the Russian military has undergone so far, Putin told his audience, is "only the first step in the rebirth of our armed forces."

Putin's options for holding on to power

It is becoming increasingly clear, even to the Americans, that with Putin as its key figure Russia will remain a prickly opponent in the coming years, and one that will seek to shape issues of foreign policy to further its own interests. As if to confirm this pattern, the state-owned natural gas giant Gazprom threatened to cut off gas supplies to Ukraine once again, citing the country's $1.3 billion in overdue payments -- precisely two days after the pro-Western Orange Coalition secured a majority in the country's parliamentary elections.

Moscow interpreted Washington's heated reactions as tantamount to an accolade and recognition of Russia's new strength. Hardly any Russians are likely to be too offended by the fact that the matter of Putin's successor was essentially hammered out behind the closed doors of the Kremlin. A Moscow magazine even insisted that the Kremlin must remain "secretive and impenetrable" in the future, because this would be the only way it could "properly defend Russian interests against the West."

Putin's candidacy as the sole candidate of United Russia (a party in which he is not even a member) and his possible role as prime minister will strengthen the government, political parties and the parliament, crowed Putin associates like Valentina Matviyenko, the governor of St. Petersburg. But Garry Kasparov, the former world chess champion and hopeless presidential candidate for the liberal, left-leaning opposition coalition, Other Russia, sees his country drifting into a "slightly watered-down one-party dictatorship."

The Power Struggle Behind the Scenes

It doesn't exactly take psychic abilities to arrive at this conclusion. The fact that the parliamentary election, according to one of the heads of the governing party, is to become a "referendum" on Putin, means that the Kremlin obviously plans to do everything in its power to surpass the outcome of the March 2004 presidential election, in which Putin captured 71.3 percent of the votes. The result would be that the pseudo-leftist opposition party, Fair Russia -- another Kremlin creation -- would barely exceed the 7-percent hurdle needed to enter the Duma, while the remainder of the vote could go to the communists and the supporters of right-wing populist Vladimir Zhirinovsky. 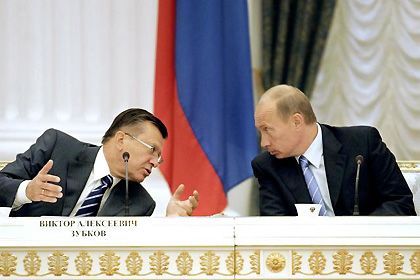 President Vladimir Putin, and his new Prime Minister Viktor Zubkov. With no power base of his own, Zubkov would likely play his preordained part in any Putin plan.

But is Putin's plan to install a puppet in the Kremlin after his departure, and then to return as president following a transitional period, entirely without risk?

Anyone who was paying close attention would also have perceived a note of displeasure at the United Russia party convention. Some delegates were clearly upset by the fact that party officials, without further ado, had simply stricken Sergei Bogdanchikov, a Putin favorite, from the list of candidates. Bogdanchikov is the head of the state-owned Rosneft oil company, Russia's largest oil producer.

The episode reveals a hidden power struggle between opposing groups within the Kremlin and shines a spotlight on Russia's internal make-up. Indeed, the power question is not decided in elections, but in a brutal struggle among interest groups. The leaders of these groups are not political candidates, and yet, next to Putin, they see themselves as the country's true masters.

Bogdanchikov belongs to the camp of Igor Sechin, Rosneft's chairman of the board of directors and deputy head of the presidential administration. Sechin, a former intelligence agent who worked for Putin when the president was deputy mayor of St. Petersburg, is seen as a shrewd puppet master in the Kremlin.

In one episode, Sechin attempted to turn his brother-in-law, the then prosecutor general, into a political heavyweight, until Putin replaced the man. In another instance, he made the 25-year-old son of the most important Russian intelligence chief an advisor at Rosneft. These kinds of intrigues threaten the stability of the Putin system.

In response, a high-powered trio of intelligence officials has mobilized against Sechin and his supporters: Viktor Cherkesov, Putin's former deputy at the domestic intelligence agency FSB and the current head of the narcotics police, Yury Chaika, the prosecutor general, and Viktor Zolotov, the head of the presidential security service.

The rivalry between the two intelligence camps, which are involved in a dispute over corruption, creates growing problems for Putin. The two camps have their own way of interpreting the fight against corruption that the president touted in his speech at the party convention as "one of the major social and political problems" in Russia: The corrupt officials are always the ones in the other camp.

The two groups are fighting tooth and nail in their turf war. On the day the party convention anointed Putin as its top candidate, FSB officers in Moscow arrested a general in the narcotics police who was also a Cherkesov confidante on charges of abusing his position. The arrest followed on the heels of the accused general's own investigation into corrupt FSB officials. The warring camps are unlikely to reconcile anytime soon, no matter how many times Putin attempts to balance their respective interests. "We could even see a Night of the Long Knives," fears one Kremlin advisor.

Putin recognizes the risks in his own ranks. He warned the party delegates that a simplified process for prosecuting corruption offences could easily "lead to arbitrary actions, which in turn would lead to more corruption."

His willingness to run for the position of prime minister could even exacerbate the tensions within the power structure. Putin can at first rely on Viktor Zubkov, the political unknown who was appointed prime minister three weeks ago. The two men share intimate knowledge of business deals that Putin approved in the early 1990s as deputy mayor of St. Petersburg.

It is also possible that Zubkov will bow to Putin's plans to mold him into a sort of ceremonial president at the Kremlin, one who would leave the real political power in Putin's hands when he becomes prime minister.

But the powerful presidential administration will hardly agree to a watering down of their influence. If Zubkov becomes president, members of the administration could convince him to invoke Article 83 of the Russian constitution, which entitles the head of state to dissolve the government -- including sacking the prime minister.

If Putin, with his machinations, does manage to bridge the gap to another term, the country could indeed be in for autocratic rule -- a prospect that frightens even pro-Kremlin commentators. "The risk of another major stagnation is greater than ever before in Russia today," wrote columnist Mikhail Rostovsky in the pro-government newspaper Moskovsky Komsomolets,a reminder to his readers of the 18 crippling years during which General Secretary Leonid Brezhnev, who was ailing by the end of his rule, dominated the Soviet realm. The country lacks a "transparent mechanism for a change of government," Rostovsky wrote.

The implication is that, like Brezhnev, Putin, who celebrated his 55th birthday last Sunday, could also end up growing old in office.