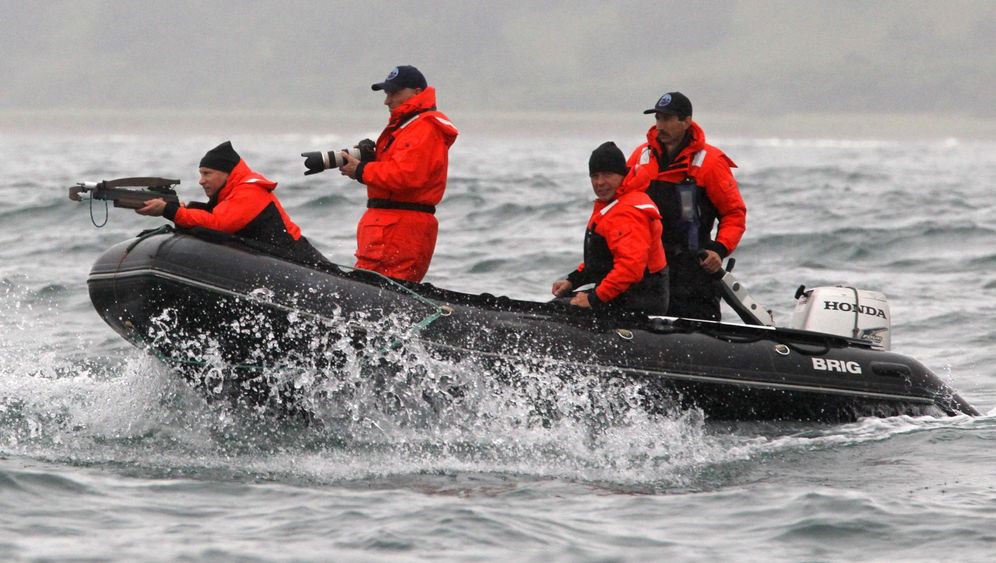 It has not been an easy summer for Russian Prime Minister Vladimir Putin. For months, vast swaths of the country have been stricken by raging wildfires, and the capital suffered for weeks from a thick cloud of smog due to nearby peat bog fires. Worst of all, the government seemed unable to do a thing about it. Criticism of the impotent official response spread almost as quickly as the flames.

But Putin's political instincts are finely tuned, and his PR strategies have been proven effective several times over. On Wednesday, the Russian prime minister added yet another entry to his resume as a rugged, nature-loving macho -- by going on a whale-shooting expedition in Russia's far east.

The expedition was supposedly a scientific one; Putin was using a crossbow to fire special darts at a passing gray whale to collect skin samples to help experts gain more insight into the whales' habitat. But Putin was in his element, bouncing through rough sea in the bow of a rubber boat powered by an outboard.

"I hit it at the fourth try!" a jubilant Putin shouted to a camera crew filming his exploits, according to the Associated Press. Back on shore, he was asked whether he thought the undertaking was dangerous. "Living in general is dangerous," came the reply. He said he did it "because I like it. I love the nature."

Bare-Chested in the Wilds of Siberia

It was only the most recent in a series of compelling appearances apparently designed to show the Russian people that Putin, though he is no longer president, remains firmly in control. Earlier this week, he visited the South Kamchatka Sanctuary, a wildlife refuge that was included as a UNESCO World Heritage site in 1996. Putin was pictured piloting an outboard past a bear wading in the shallows.

During the summer, in the midst of widespread criticism at the government's handling of the forest fires raging across the country, Putin climbed into the cockpit of a firefighting plane and flew out over the flames. Indeed, his numerous publicity stunts this year have fueled speculation that he might be planning a return to the presidency in 2012. Putin has said, however, that he will not run against President Dmitry Medvedev and that the two will come to an agreement prior to the election.

Wednesday's photo shoot recalls Putin's 2008 exploits when he shot a tiger with a tranquilizer gun, reportedly saving a camera team from certain mauling. Earlier this year, he was photographed attaching a tracking collar on a polar bear. And back in 2007, photos of him fishing and hunting bare-chested in the wilds of Siberia made their way around the globe -- just as he had no doubt been hoping.