With war waging in Syria and in Yemen as well as the perpetual threat of violence by the terrorist organization Islamic State (IS), the myriad trouble spots in the Middle East have eclipsed the ongoing conflict between the Israelis and the Palestinians for close to two years now. Mahmoud Abbas, head of the Palestinian Autonomous Authority, is hoping to place the enduring crisis back on the agenda during his planned visit with German Chancellor Angela Merkel on Tuesday.

In an interview with SPIEGEL ONLINE, he calls on the German leader to invoke her good friendship with Israel as part of an effort to push the peace process forward again. Abbas also condemns the recent wave of knife attacks by Palestinians against Israelis, while at the same time lodging serious allegations against the government of Benjamin Netanyahu.

SPIEGEL ONLINE: Mr. President, the peace process is dead. Many members of Netanyahu's right-wing government openly oppose a two-state solution. Should Germany change its policies in the Middle East?

Abbas: We know history. We will not demand that Germany put more pressure on Israel. But we know that Germany supports a Palestinian state. This is why Chancellor Merkel should use her good friendship with Israel to promote peace.

SPIEGEL ONLINE: In light of the civil war in Syria and the terror attacks taking place in Europe, many politicians feel there are more urgent foreign policy issues at the moment than the Israeli-Palestinian conflict. Do you fear you are being forgotten?

Abbas: Of course we notice that the instability of the whole region is having an effect on interest in the Palestinian issue. But the world must not forget us. The Israeli-Palestinian conflict should be solved first. Many terrorists use the conflict as a cover. They claim that they are supporting our struggle. But this is not true. We condemn their deeds. But if we don't find a solution to the conflict soon, I fear the violence of these terrorists groups will spread and affect us in our territories and in Israel.

SPIEGEL ONLINE: It is in fact true that Israel has been haunted for months by a wave of Palestinian violence. The perpetrators are mostly very young and act spontaneously. Many are speaking of a "knife intifada."

Abbas: This is not an intifada. We have to understand why these young people are committing such attacks. This generation experiences the violence and humiliation of the occupation on a daily basis. And they experience how more and more settlers are coming to occupy their land. If Israel stops this, no child will take a knife to attack Israelis.

SPIEGEL ONLINE: The Netanyahu government has accused you of incitement. How do you respond to this?

Abbas: I am against these attacks and I have said this over and over again.

SPIEGEL ONLINE: So you do not have influence on the younger generation?

Abbas: If a young person loses hope, then he or she doesn't care if I condemn their deeds.

SPIEGEL ONLINE: But you meet with relatives of attackers and send condolence letters. Are you not sending the wrong signal by doing this?

Abbas: If a Palestinian dies, we support their family socially. It does not mean that we support what they did.

SPIEGEL ONLINE: You call attackers who have been killed "martyrs." Doesn't that imply some sort of heroism?

Abbas: We are not encouraging our youth to commit violence. But if someone dies at the hands of Israeli security forces, we call that person a martyr. This is our tradition.

SPIEGEL ONLINE: You have repeatedly accused the Israeli government of planning to change the status quo on the Temple Mount. This is a very sensitive issue that triggers strong religious emotions. Aren't you heating up the conflict with such statements?

Abbas: This is not about religion. The problem is that Israel is occupying our land and attacking our holy sites. The Al Aqsa Mosque is ours. It is part of our capital city East Jerusalem, which has been occupied since 1967. The Israelis should stay away from Al Aqsa. Instead, they are provoking us on a daily basis with their visits and violating the status quo by praying there.

SPIEGEL ONLINE: But what we are dealing with here are extremists and not the Israeli government.

Abbas: Among the visitors are members of the Knesset. And the Israeli government has the responsibility: They have to stop the extremists. They have to respect their obligations regarding the status quo.

SPIEGEL ONLINE: Many chances for peace have been missed over the past 20 years. Can you only see failures on the Israeli side, or did you also make mistakes?

Abbas: I am constantly asking the Americans and Europeans: What are my mistakes? They confirm that I made no mistakes. It is the Israeli side which misses all the chances for peace.

SPIEGEL ONLINE: Instead of negotiating with the Israeli government, you are now taking unilateral steps as well as addressing the international community directly. Do you think this is a good strategy?

Abbas: We support the French initiative, which calls for a multilateral instead of a bilateral approach. We want an international conference and an international support group to be established to reach peace. We will talk with the Europeans, the Americans, partners in Asia and moderate Arab states. We would also like Israel to join, but they are refusing this international approach.

SPIEGEL ONLINE: What is the Palestinian side offering for such talks?

Abbas: We will reaffirm our recognition of the State of Israel living side by side with the State of Palestine in peace and security. I am asking Netanyahu to sit with me at the table and negotiate. I do not have any preconditions. We only want a temporary building stop in the settlements while these talks are taking place. The Israelis are telling us it is not the right time for a two-state solution. But when is this moment? The right time is now and not tomorrow or any time in the future. We want to coexist with them. But the Israelis don't want that. They want to separate themselves from us and prefer not to see us.

SPIEGEL ONLINE: Are you prepared to recognize Israel as a Jewish State?

SPIEGEL ONLINE: Israel is very concerned that radical groups could gain more influence in the West Bank. Hamas is popular, especially among younger people, as elections at universities showed.

Abbas: These results were individual cases.

SPIEGEL ONLINE: According to the polls, you aren't very popular among your people at all. Your government lacks legitimacy. There haven't been any elections in the West Bank for the past 10 years. Do you fear that Hamas could win a possible election?

SPIEGEL ONLINE: Will you seek another term as president?

Abbas: I do not want to run again.

SPIEGEL ONLINE: In the West Bank, an increasing number of militant Hamas cells are active -- with some planning terror attacks against Israel. Do you still have control of the situation?

Abbas: Our security forces are working very efficiently to prevent terror. Just a couple of days ago, three young men were tracked down and arrested. They were planning an attack. In this context, our security cooperation with Israel is functioning well. Hamas is trying to sabotage things, but we have the situation under control.

SPIEGEL ONLINE: You recently stated that the Palestinian Authority is on the brink of collapse.

Abbas: It is a matter of fact: If the Israeli Defense Forces are operating in our cities in Area A, this is bothering us and violating the agreements. This area is supposed to be controlled by the Palestinian Authority alone. If Israel will not end these incursions, then it should take over the responsibility. But then there will not be a Palestinian Authority anymore. If Netanyahu sits in this chair, I will not be needed anymore.

SPIEGEL ONLINE: Mr. President, we thank you for this interview.

Mahmoud Abbas, 81, has served as president of the Palestinian Authority since January 2005. He is one of the founders of the Palestinian Liberation Organization and the Fatah Party. His government suffers from a lack of legitimacy because no elections have been held in the Palestinian territories in the past 10 years. The economic situation in the West Bank is abysmal and Abbas is faring poorly in the polls. 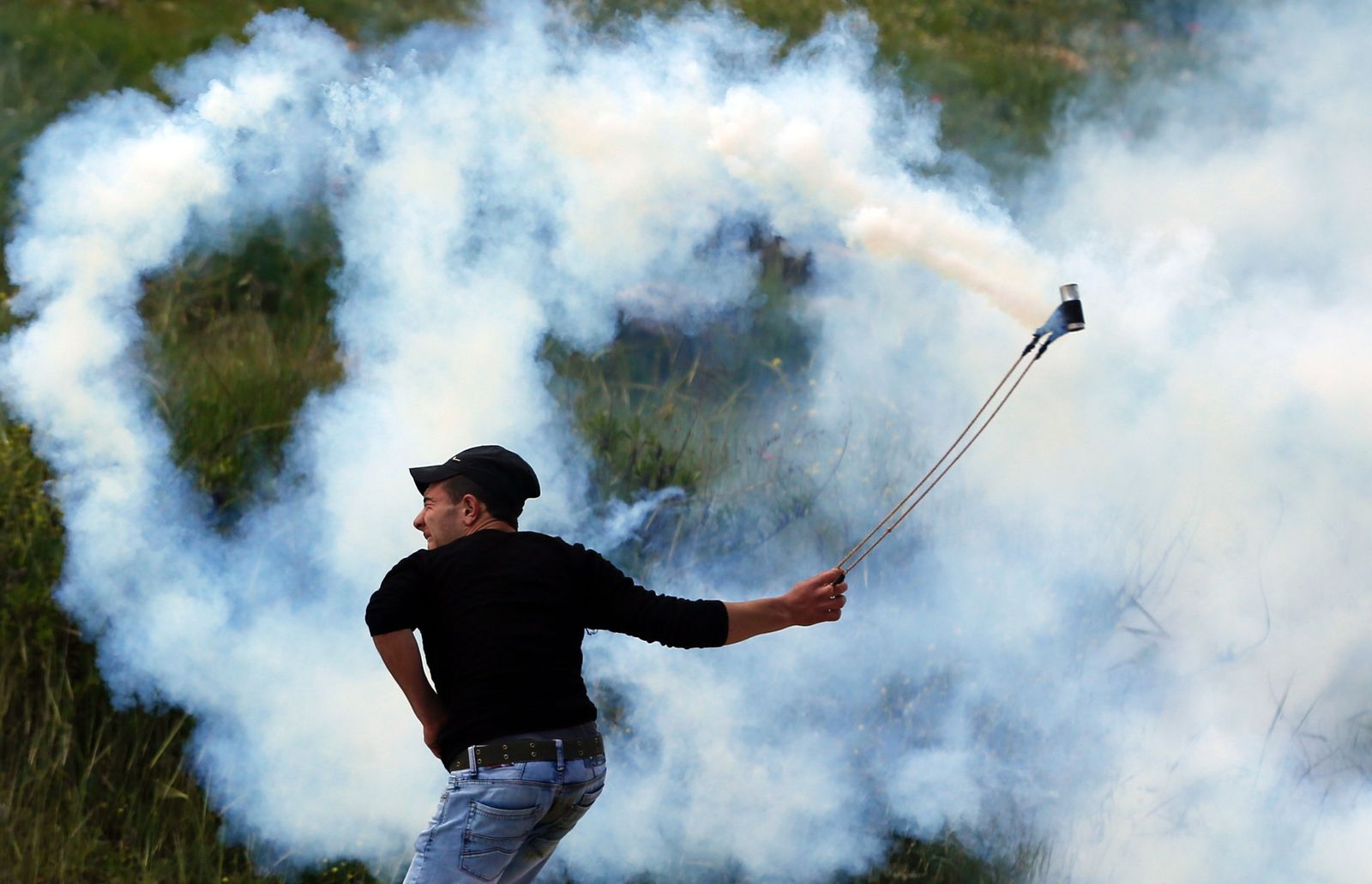 A Palestinian protester in West Bank 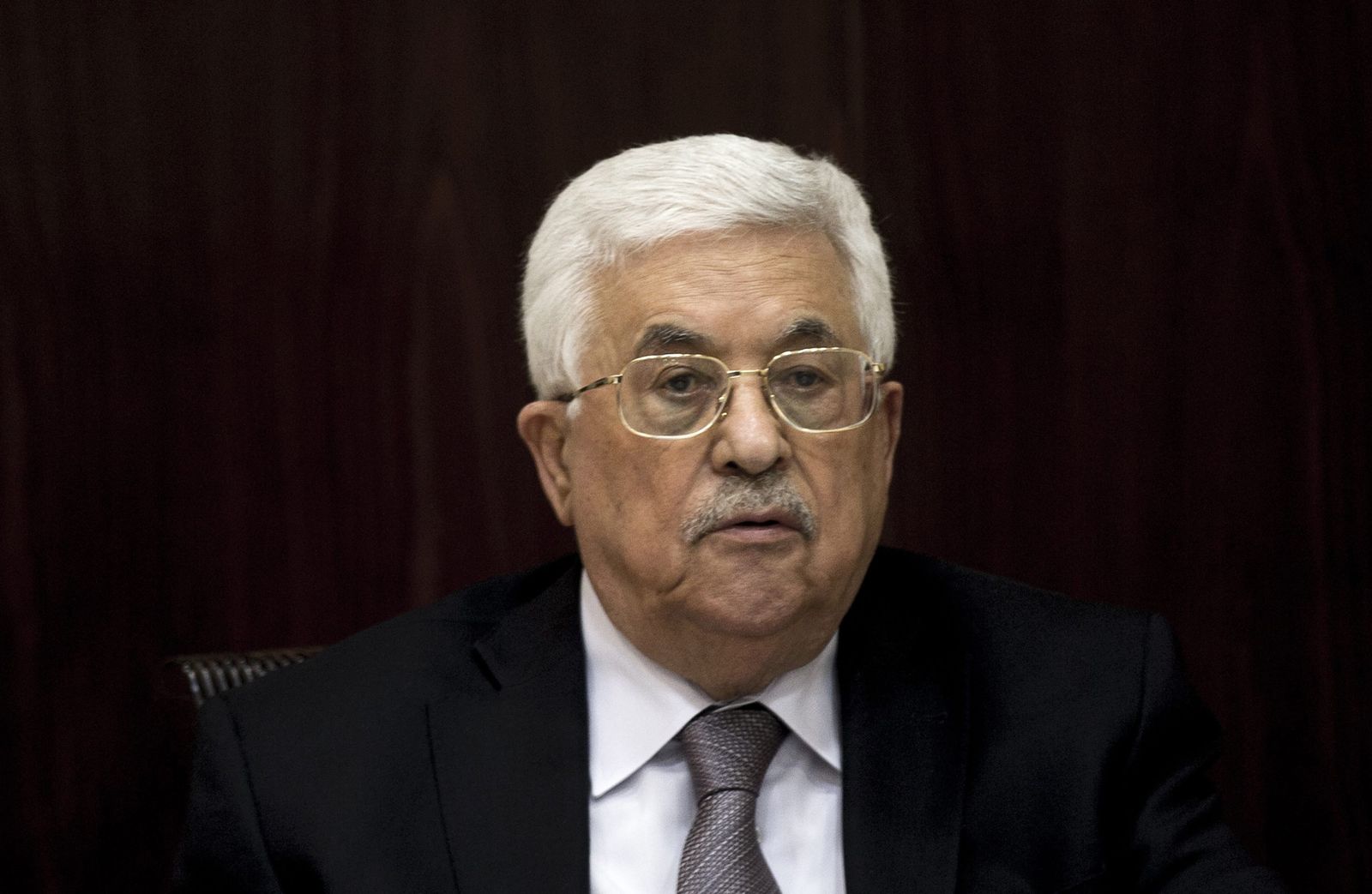