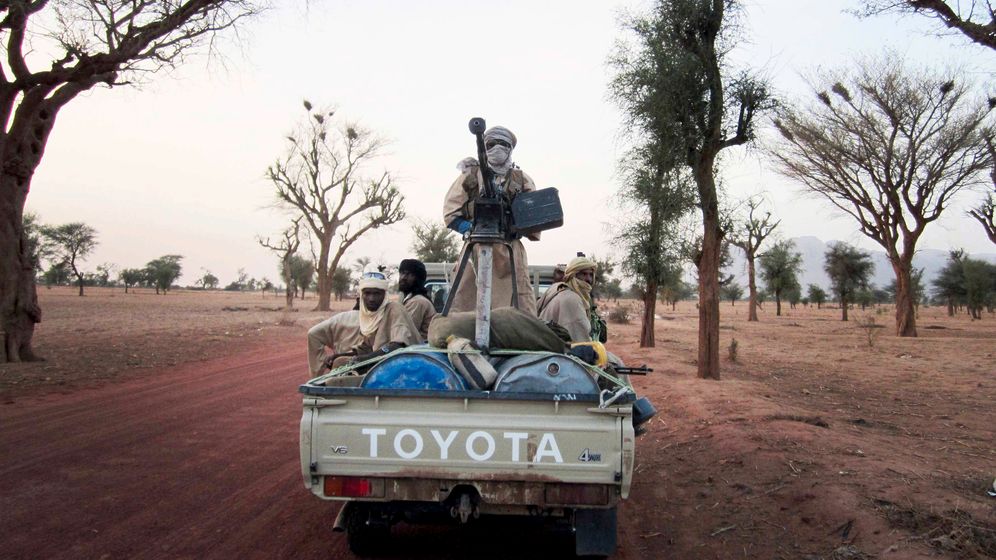 Colonel Moussa Maiga has summoned up his entire army of 700 volunteers, who are now standing at attention in sandals. "Right face!" he shouts. The men step on each other's feet and stumble their way into a march formation. A mobile phone rings in the second platoon. The owner is punished with 20 pushups, a torture on this sandy square in Mopti, a city in central Mali, where the temperature is 40 degrees Celsius (104 degrees Fahrenheit) in the shade.

"We are the ones who will recapture the north," the soldiers sing.

The troops practicing their marching skills here in Mopti are part of a militia called the Front for the Liberation of the North (FLN). Most are taking part in the exercise in rubber sandals and T-shirts. One man is wearing a shirt with a map of Africa outlined in gold sequins on the front. Football jerseys are popular, including those of former Brazilian footballer Ronaldo and German national team player Piotr Trochowski.

The FLN recruits spend eight hours a day running and crawling across the terrain. Many are refugees from northern Mali, which the Islamists have captured and where Sharia law is now in effect.

The sandal-clad members of the FLN militia are supposed to fight Islamists who are aligned with Al-Qaida in the Islamic Maghreb. They are short on everything but courage. Most of them live on government aid, which amounts to the equivalent of just a few dollars per month. "We are physically and morally prepared for battle," says Colonel Maiga.

He is the only one dressed in a uniform -- combat fatigues. He brought along his pistol, with nine rounds of ammunition in it, from Liberia, where he once served as part of the Malian contingent in a group of African peacekeeping troops.

Maiga had, in fact, left military service years ago. In Gao, in the area now under Islamist control, he owned several successful grocery stores. But the businesses were looted shortly after the Islamists' victory. Today, two months later, the new masters in Gao are chopping off the hands of thieves. Maiga, who is himself a devout Muslim, fled to the south. "I couldn't breathe up there," he says.

More than anything, the self-proclaimed liberator of the north now needs donations so that he can buy weapons. He hopes that businesspeople from Mopti and the capital Bamako will give him money, since the crisis affects everyone.

Mopti is the last free city on the road to occupied northern Mali. Women still walk through the streets without veils, and beer and wine are still served in bars and restaurants. Music rattles from loudspeakers set up at stalls near the old mosque.

But only about 100 kilometers (60 miles) farther north, the crescent on the minarets has become a symbol of violence, despotism and repression. The jihadists have already threatened that Mopti will be their next target.

Foreigners are afraid to go to Mopti because of the threat of kidnappings and attacks. All aid workers have left. The military, consisting of a strong contingent of Malian government troops, is constantly on high alert. More than 400,000 Malians have fled through the Sahel desert to southern Mali or to neighboring countries like Mauritania and Niger.

Ironically, Mali was seen as a model African country for 20 years. It had a democratically elected government, elections were fair and the press could operate freely. Thanks in part to tourism, the economy grew at an impressive annual rate of 5 percent in recent years.

Everything changed in March, when an army of radical Muslims and Tuareg separatists overran the northern part of the country. The Islamists destroyed tombs in the legendary cultural center of Timbuktu, a UNESCO world heritage site. Since the takeover, Sharia law has been in effect in the captured regions. In Aguelhok in the northeast, an unmarried couple died in a hail of stones thrown by a fanatical mob.

At first, the central government seemed powerless against the Islamist onslaught. When Amadou Sanogo, a military officer, overthrew the elected president in Bamako in the spring, he justified his actions by claiming that the government was too weak to stop the insurgents.

Even the army is a long way from recapturing the occupied north. In response to international pressure, the coup leader withdrew to his barracks.

But that doesn't mean that Sanogo is now powerless. His supporters have been blamed for the disappearance and torture of his opponents. Journalists who dare to draw attention to the abuses can expect beatings.

Does Mali threaten to turn into another Somalia, a country in which militias and power-hungry cliques struggle for control, and where anarchy prevails and people are starving to death? French Foreign Minister Laurent Fabius has already hinted that the international community will probably have to intervene.

Wanting the Old Mali Back

The country's near-collapse is in full view in Bamako, where Monique Doray lives on Route de Sotuba. Born in Cameroon in 1936, Doray has a French passport, and yet, she says, "I am African." Her only connection to her native France is her love of fine food. Everyone used to come to her restaurant for escargots, foie gras and smoked Niger perch: politicians, diplomats, aid workers, businesspeople and tourists on their way to Timbuktu.

Today her hotel and restaurant, Le Rabelais, is empty, even at dinner time. "I don't know how I can continue," says Madame Monique.

Tourism, which used to be one of the key pillars of the Malian economy, is now completely dead. Most hotels are closed, and the chefs, waiters and maids are out of work.

Doray was only able to keep 57 of her 95 employees. She had even built a mosque for her employees in the hotel courtyard, between the wine cellar and the kitchen. "Ninety percent of Malians are Muslims, but they're very tolerant."

Nevertheless, the times seem to be changing. She noticed with some concern that a few bars in Bamako recently closed their doors voluntarily during Ramadan, perhaps in a rush to comply with the Islamists' wishes. Doray only wants one thing, she says: "Mali should become Mali once again."

On Monday, Dioncounda Traore, the interim president installed after the coup, announced a new cabinet with 31 ministers. Five of the ministers are considered to be close to Sanogo, the coup leader, but none are associates of the ousted president. The West African regional bloc, ECOWAS, had threatened Mali with sanctions and possible expulsion if it failed to put together a government of national unity. The interim government has been crippled by political infighting.

Hamadoun Touré is an intellectual and journalist who served as communication minister before the cabinet reshuffle. Part of his job was to show that the government is trustworthy, despite the coup.

Touré accuses Mali's entire ruling class of political failure. "The rebels managed to overrun two-thirds of the country in only three weeks," he says. "I hope that the political class is sufficiently shocked."

In his view, Mali was never the model country celebrated in the West. "Democracy was a façade." The parties and the government, he says, merely complied with laws governing freedom of expression and pluralism to keep up appearances. "But there is more to real democracy, such as the chance to get an education and healthcare."

Touré is now hoping for help from abroad. Although the country has not requested international military intervention, Touré makes it clear that he would welcome aerial reconnaissance, weapons and military advisers.

Members of the Tuareg minority maintain their Tamast cultural center near the government complex. Zeidane Ag Sidalamine is sitting there inside a tent. He is probably the most influential representative of his people in Bamako, and he hopes to be able to prevent new fighting.

He has just come from a meeting with the president. The Tuareg make up some 10 percent of the Malian population. "Only a minority of them want their own country," says Ag Sidalamine, a tall, light-skinned man with a carefully trimmed moustache. To keep out the heat, he is wearing an airy robe made of a gold-colored material. He believes that discrimination against his people is a thing of the past. "We haven't been discriminated against for a long time," he says.

Ag Sidalamine helped bring about the changes. When the Tuareg rebelled, he helped negotiate a peace treaty in 1991 and 2006 that guaranteed them positions in the government and a say in development projects. "We need recognition of our culture, but we don't need territory," he says.

This hasn't been enough for the more radical Tuareg, however. Many joined the army of former Libyan dictator Moammar Gadhafi as mercenaries. They returned to Mali at the end of last year after Gadhafi's death. They brought along their weapons, which they then turned on the Malian army. They fought for an independent Tuareg state under the name National Movement for the Liberation of Azawad (MNLA).

They also aligned themselves with the Islamist group Ansar Dine, as well as with the Unity Movement for Jihad in West Africa (MUJAO), which is affiliated with Al-Qaida in the Islamic Maghreb. The leader of Ansar Dine, Iyad Ag Ghali, is also Tuareg. A man who is adept at acquiring and distributing money and power, Ag Ghali is about 60 and was a colonel in Gadhafi's international brigade. For years, he was in contact with Al-Qaida in the Islamic Maghreb, which repeatedly abducted foreigners, businesspeople and aid workers in the Sahara Desert.

Because the MNLA separatists didn't want him as their leader, Ag Ghali founded Ansar Dine. The weapons came from Libya, and Ag Ghali raised the funds he needed for the upkeep of his combatants with kidnappings and the drug trade. Highly frequented smuggling routes for South American cocaine run from West African ports in Guinea, Nigeria and Guinea-Bissau through the Sahara and on to Western Europe.

Ag Ghali's group also attracted jihadists from Yemen, Qatar and Algeria. Today they are the most relentless guards of the new dictatorship that claims to rule in the name of Allah. Meanwhile, Ag Ghali has also managed to drive the MNLA, which had aligned itself with the Islamists, out of Timbuktu.

Despite Ansar Dine's capture of the north, Tuareg politician Ag Sidalamine is optimistic. "The Islamists lack a solid base in Mali," he believes. "Money is the only thing that's keeping their fighters in line. The people don't want Sharia."

This is becoming increasingly apparent. When the Islamists wanted to amputate the hand of a thief in Gao in early August, angry residents of the city prevented the barbaric punishment from being meted out. Before that, hundreds in Goundam, a town in north central Mali, had obstructed a public flogging.

Hated for Her Message

Singer Naïny Diabaté, Mali's most popular musician, refuses to believe that her fellow Malians will succumb to religious fanaticism. "I don't know what's happened to this country," she says.

Diabaté has just broken the fast. The men are still praying in the courtyard of her estate in Bamako. She lives in a multi-generational house, where sofas along the walls of the living room offer enough room for 20 family members. She sings about life in Mali, and about poverty and solidarity. "We don't have much, but we are a peaceful people," she says.

She is a cheerful musician and an effusive dancer, but her concerts have become a rarity. She recently sang for refugees in Niger, but the fans are not showing up in Bamako. "They're afraid of attacks," she suspects. "And the worst thing is that I too am afraid to stay in Mali."

The Islamists hate her because of her music and her lyrics, which often address the topic of equal rights for men and women. She says that she and her friends used to have some influence on music-obsessed Malians. "We were mediators and peacemakers." Today, however, she is no longer sure whether her message is still reaching her compatriots.

Nevertheless, her latest song has become yet another hit. It's called "Peace."