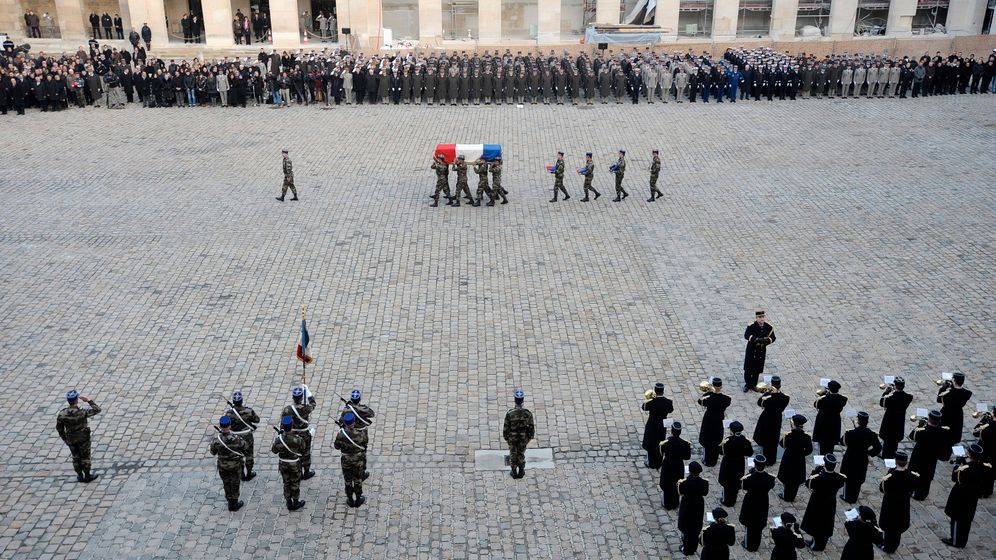 The same annoying woman is rattling the glass door again. She's come several times today already, and each time the governor of Gao sends her away again. It's the same every day, from morning to night -- petitioners line up at his door and Mamadou Adama Diallo, 55, has to turn them away. Diallo is the highest government representative in this dusty city of 90,000, but that doesn't mean he's able to help people here, because the government doesn't exist anymore -- at least not here in northern Mali.

The governor's makeshift office contains a kitchen table for a desk and a wobbly ceiling fan. A mouse scampers across the floor of the bare room. Out front in the reception area, 11 secretaries work on documents of one sort or another, but even their boss doesn't know exactly what they're doing. "I have the most difficult task anyone in Mali could take on," Diallo says.

Gao exists in a perpetual state of emergency. First, Tuareg rebels invaded in March 2012, and then Islamists terrorized the city. The place has been left with such enormous problems that the governor doesn't know what to do first. Should he begin by rebuilding the destroyed infrastructure? Or should he start by fighting water shortages, power outages and the anarchy that reigns in the countryside around the city? Or by providing the necessary aid to the traumatized population?

Reaching Gao isn't easy. It requires passing through seven military checkpoints and traversing run-down roads where bandits are a constant threat. The traveler who negotiates these obstacles then arrives in a battered city. The facades of the mud-brick buildings are riddled with bullet holes. Ruins are all that remain of the once magnificent courthouse and the police station. At intersections, signs depicting skulls and crossbones warn of mines and unexploded bombs. Many storefronts are boarded up and all of the banks are closed.

Yet Governor Diallo, who oversees this chaos while wearing an immaculate general's uniform, is one of those stoic optimists of a type it seems only Africa can produce. Since French forces liberated the city in January of this year, Diallo says, 15,000 refugees have returned to Gao and life is gradually returning to normal. Then he turns to the statistics.

"Look at the results of the presidential election in August, which went peacefully despite extremely adverse circumstances," he says. Voter turnout in the Gao Region was 58.7 percent, a figure the governor is proud of. Since last week, Mali has had a new president, Ibrahim Boubacar Keïta, a man everyone calls simply his initials, "IBK." Keïta took over a government in shambles.

"What we hope now is that the world won't forget us, and will help us rebuild," Diallo says. "After the war, now we need to win peace, and that is much more difficult."

Donor countries have promised more than €3 billion ($4 billion) in aid. The question, though, is how much of that will end up being pocketed by corrupt officials. Mali is already "over-aided," experts warn. The country has been showered with development aid for decades -- but little to none of it ever arrived in the marginalized north.

Gao's chief of police compares the situation to Germany after the fall of the Berlin Wall. "What for you was the east, for us is the north," says Colonel Nia Coulibaly. Aside from his dashing uniform, Coulibaly has little left. A suicide bomber blew up his old office, and now he too performs his duties from a ramshackle substitute location. Coulibaly is supposed to restore law and order here, but his 85 officers lack equipment, radios, even office materials. There is just one usable patrol car.

Schools and hospitals are in similarly desperate straits. The city's few pharmacies were destroyed by the Islamists, because they advertised their business with green neon crosses, a symbol of hated Christianity. Gao was the insurgents' base of operations, meant to become the capital of their Islamic state. Their tyrannical rule lasted precisely 213 days and the central square still bears signs of those months of terror. The words "Place de la Sharia," although now painted over, can still be made out above an archway.

Truck driver Mokhtar Touré, 27, avoids this place. Islamists caught him with two assault rifles he had found by the side of the road and accused him of arms trading. "They tied me up," he says, "then a young bearded man, an Egyptian, pulled out a carving knife and cut off my right hand, without anesthesia, very slowly, as if he were cutting up a chicken." Touré says he passed out during the half-hour ordeal. While telling his story, he suddenly pulls the brown plastic prosthetic from the stump of his arm. "My hand fell off like that," he says. He dreams of it every night, and every day finds himself drowning in profound sadness.

Touré now lives on charity and says he feels like a leper. Many of the victims of terror in Gao feel much the same -- the women who were raped, the merchants with amputated limbs, the unfortunate individuals who were beaten half to death with metal rods for the sin of drinking beer.

Fearing an "Afghanization" of the Sahel region, former colonial power France intervened militarily to end the madness. An elite group of French troops drove out the jihadists over the course of just 19 days earlier this year.

Now women once again ride through the streets on mopeds, dressed in colorful clothing and not wearing veils, with their hair blowing in the wind -- just as they always did in Mali, a tolerant Muslim country in which fanatical religion is a foreign concept.

The covered market has been rebuilt with French aid, and now bears the name Damien Boiteux, in commemoration of the first French soldier to die in "Opération Serval." People here are deeply grateful to their former colonial rulers for intervening, and French soldiers are celebrated wherever they go. In front of the Tomb of Askia, Gao's most iconic structure, which miraculously survived the conflict unscathed, children and teenagers surround two French tanks, dancing and chanting, "Vive la France!"

French soldiers who are here on their last day in Gao photograph the children with their smartphones. Paris plans to reduce its troop presence from 4,000 to 1,000 by the end of the year, with the United Nations' MINUSMA mission replacing the French forces. On July 1, more than 12,600 UN peacekeepers working under a robust mandate took over responsibility for safeguarding the fragile peace here. People in Gao, though, would have preferred for the French to stay. They have little confidence in soldiers from Senegal, Togo or Benin, and even less in the Malian army.

"The media called us a big mess, and they were right," says military spokesman Diaran Koné. The army, lacking strong leadership and the willingness to fight, was unable to stop the rebels. It was incapacitated after a March 2012 military coup, which was supposed to turn the tide of the fight against the Tuareg rebels, but instead drew international condemnation. Newly elected President Keïta used a feeling of collective humiliation to his advantage in the recent election campaign, which he won under the slogan, "For Mali's honor."

"Everything will be all right," predicts military spokesman Koné. "We're restructuring the armed forces, with support from Europe." The lieutenant colonel praises the European Union's training mission that is taking place near Bamako, the capital, with the goal of transforming the "big mess" into a disciplined force.

And what has become of coup leader Amadou Sanogo? "He is in charge of the commission that is reforming the army," says Koné. Such news from the capital reinforces people's doubts about their country's own army. Who will protect them when the peacekeepers' one-year mandate expires?

"The reasons behind the uprising haven't been taken care of," says one official. "The Tuareg rebels, who started the war, will continue to fight." This man asks to remain anonymous, as he is Tuareg himself and fears retaliation. The Tuareg still seek to establish an independent state and their MNLA liberation movement controls Kidal, a desert town 300 kilometers (200 miles) northeast of Gao.

The Islamists, who originally allied themselves with the secular rebels, likewise have not just disappeared into thin air. It is believed that about 800 of them were killed, but most were able to escape. They have gone underground, hiding in the desert or fleeing to neighboring Mauritania, Algeria and Niger to regroup.

"The jihadists should stay where they came from," says Abdou Cissé, 53, a muscular man in a colorful robe. He points to his guitar, a ruby red Ibanez. "They weren't able to destroy this, because I smuggled it into Bamako," he says. All of the rest of his instruments were seized and burned by the Islamists, Cissé explains. Now, he can once again play music without facing the punishment of whipping.

"The nightmare is over for now, but the fear remains," Cissé says. He means a fear that it will start all over again, that the Islamists will return, that Mali will become a "failed state" once and for all. Part of it, too, is a fear that he will no longer be able to play "Tole, Tole," a song that has nothing to do with politics, but rather is an ode to the beauty of Malian women. 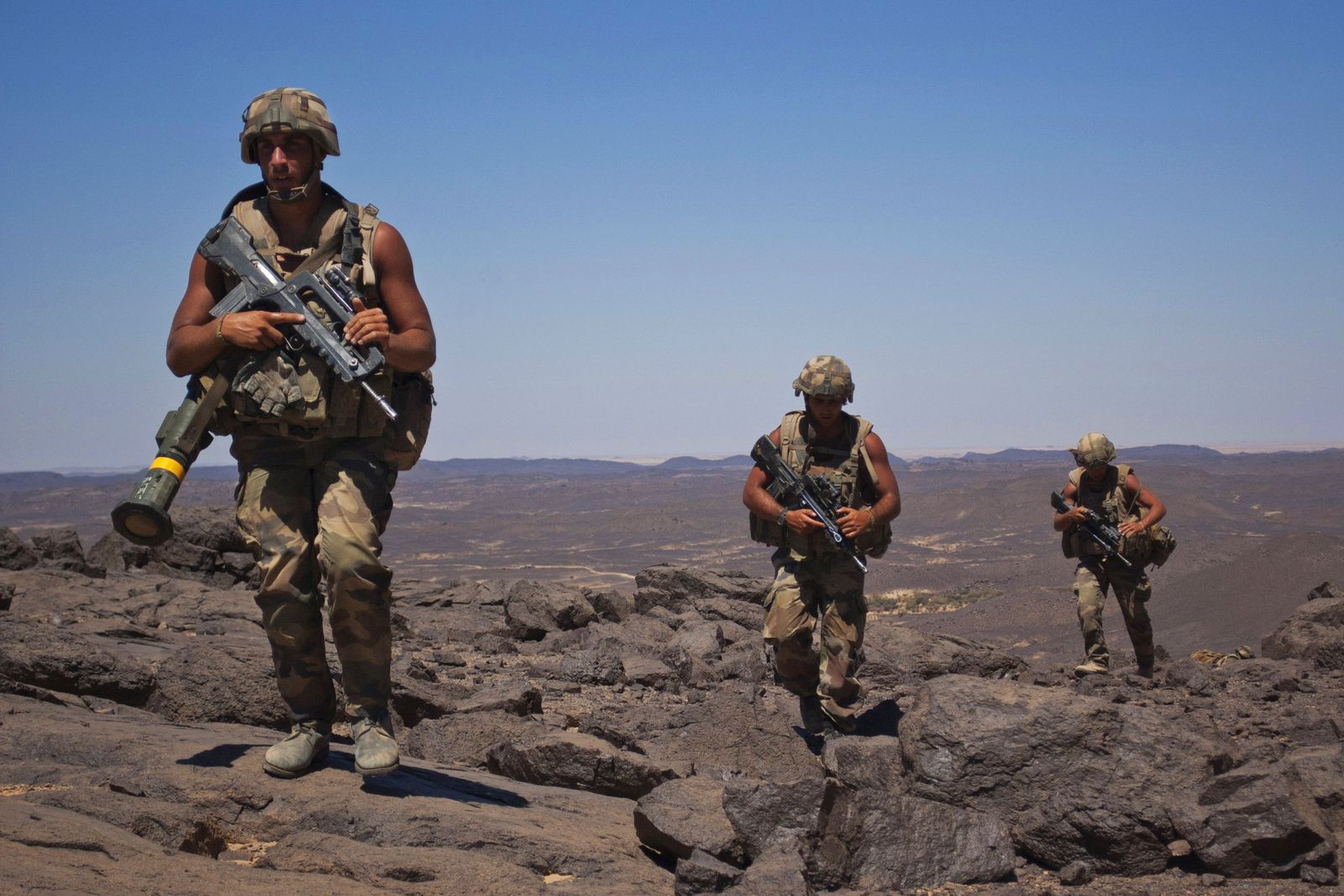 French soldiers patrol the Terz Valley in northen Mali in March. Paris plans to reduce its troop presence in the country from 4,000 to 1,000 by the end of the year, with the United Nations' MINUSMA mission replacing the French forces.