SPIEGEL ONLINE: Mr. Habashi, German Foreign Minister Guido Westerwelle called the toppling of Mohammed Morsi a "serious setback for democracy." How would you describe it?

Mamduoh Habashi: Mr. Westerwelle has a different understanding of democracy than I do. For me, democracy is the will of the people, and this blatantly manifested itself in a tremendous mass movement, the largest Egypt has ever seen. For Westerwelle, on the other hand, democracy appears to be something purely formal. For him, this has solely to do with the 2012 vote, despite the fact that the presidential election at the time was anything but clean.

SPIEGEL ONLINE: Were the elections manipulated?

Habashi: Definitely. First, there was no real election oversight. Every institution was controlled by the military, and the army very much wanted to prevent a representative of the revolution from being elected. With candidates like (Hosni Mubarak's last prime minister) Ahmed Shafiq and Morsi, they thought the things would tilt in their favor. Additionally, the Islamists invested a lot of money in the campaign and bought votes. No other political group could keep up.

SPIEGEL ONLINE: But internationally the elections were seen as exemplary.

Habashi: Most Egyptians felt they had been cheated out of their revolution, but they still accepted Morsi's victory. It wasn't a clear victory, though. Morsi had only a razor thin majority. His presidency was characterized by unbelievable arrogance and audacity. Morsi and his Muslim Brotherhood paid even less attention to the people's hardships than Mubarak.

SPIEGEL ONLINE: And that's why the military had to intervene on July 3?

Habashi: The Egyptian military did what it had to do. There was no other option, because millions of people wanted the Brotherhood to be stripped of power. What was the alternative -- to look on as democracy was undermined and destroyed? Do you know what people here say? They compare it to the purchase of preserved food that is supposed to last for four years. Imagine opening up the can to find that after just half a year, it has gone bad. What would you do? Eat it anyway or throw out the can?

SPIEGEL ONLINE: At the same time, since Morsi was ousted there have been fresh protests and attacks. Egypt has become more dangerous.

Habashi: Of course, many Islamists are radicalizing and turning to violence. That doesn't mean, however, that the country is sinking into chaos. The Muslim Brotherhood's popularity is sinking rapidly. Morsi supporters have never gotten more than 100,000 people onto the streets, whereas his opponents have drawn several million.

SPIEGEL ONLINE: Does the Muslim Brotherhood still believe it can turn the tide in its favor?

Habashi: No, the leaders of the Brotherhood know the end is coming. At a certain point, they will negotiate with the interim government and the military, but first they want to get as much out of it as they can.

SPIEGEL ONLINE: Europeans and the Americans have called on both sides to reconcile. Do you see any chance of this happening?

Habashi: What kind of reconciliation are we talking about? The Islamists are hardly interested in any kind of sustainable reconciliation. They are digging in their heels, unwilling to let go of their totalitarian ideology. A non-secular state according to Islamist ideology, which would inevitably discriminate against those with other religious beliefs, can never be a democratic one. The mainstream media often refer to the post-apartheid struggle in South Africa in this context. But the example is totally wrong. In South Africa, the white minority very clearly renounced its apartheid policies. That was the absolute prerequisite for reconciliation. The Muslim Brotherhood lacks that kind of insight.

SPIEGEL ONLINE: You referred to the fact that, initially at least, the Brotherhood and the military cooperated successfully. What went wrong?

Habashi: The military leadership and the Muslim Brotherhood had a clear deal stipulating that the generals would maintain all privileges and would not have to answer to any institution and that, in turn, the Islamists would be allowed to rule the country as they saw fit. At first, both sides upheld the deal. But as dissatisfaction with Morsi grew, the military could not remain inactive.

SPIEGEL ONLINE: After the downfall of Mubarak, revolutionaries had significant difficulties dealing with the military council. Why do you think things will go better this time?

Habashi: The military leadership has no interest in actually ruling the country. They would prefer to leave that to others. In 2011, they had no choice, because there actually was a power vacuum left behind after they sacrificed Mubarak and his clique. However, I will admit that the current revolt is comprised not only of revolutionaries, but also of members of the old regime. The coalition against Morsi spans from leftists to liberals to nationalists and right up to important military officials.

SPIEGEL ONLINE: In other words, the interim government currently in place is partly made up of the very individuals who were the target of protests in 2011.

Habashi: Yes, the interim government clearly is not a product of the revolution. However, it still represents a huge leap forward because we can expect that it will uphold the rule of law. And it is comprised of experts who truly understand something about economics, justice and agriculture. I anticipate that the most pressing problems will be addressed. There is hope again -- and there wasn't any during Morsi's last days.

SPIEGEL ONLINE: Do you think it is right that Morsi is still being detained at an undisclosed location? The European Union is demanding his release.

Habashi: Public prosecutors are still investigating him. At issue is the case of a jailbreak that the leadership of the Muslim Brotherhood was also involved in. There are even eyewitness reports. And that is just one of many allegations. There are lists establishing how Morsi's minions were given real estate either for free or at rock-bottom prices. But of course court procedures against Morsi also have to be fair and transparent. The justice system cannot be used to exact revenge. 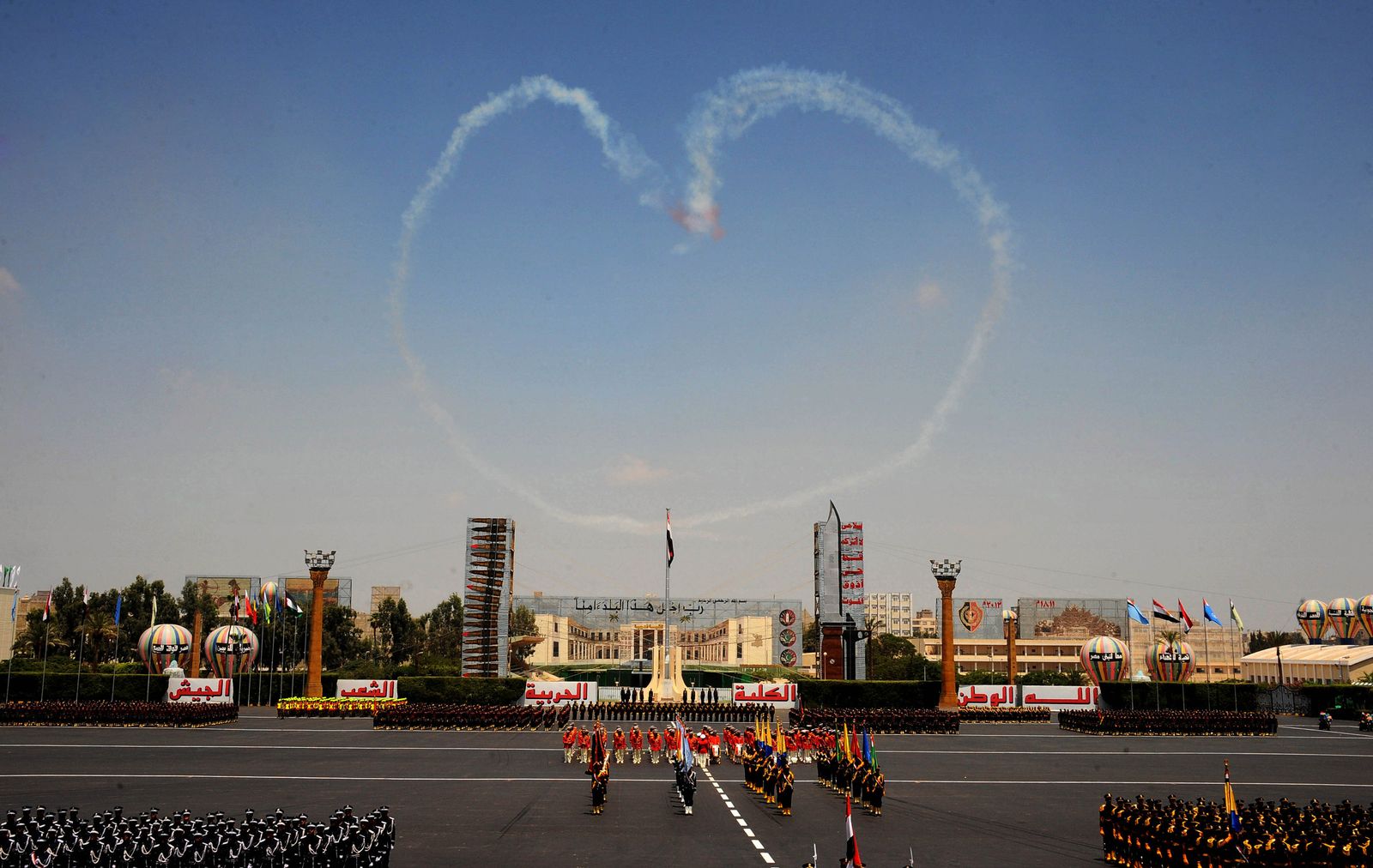 Egyptian fighter jets leave a heart-shaped smoke trail in the sky during a ceremony at a military base east of Cairo on Monday.