It was Nov. 6, 2018, and Pep Guardiola was sitting behind a UEFA podium to answer reporters' questions about accusations that had been leveled against his club, Manchester City. The Spanish-born coach shook his head, scratched his ear and shrugged his shoulders.

"Believe me," Guardiola said, "I don't know what happened because I'm a manager." He said he was unable to contribute anything to the discussion about whether his club had violated UEFA rules. "Of course we want to follow the rules of UEFA, FIFA, the Premier League," Guardiola said. But who exactly he meant by "we" was unclear. He couldn't have been talking about Manchester City's leadership -- they seem to have been disregarding the rules for years.

The most important weeks of the year are beginning for Manchester City. From a sporting perspective, the team is in fine shape. Last weekend, they secured the league cup, their first title of the season. After a brief period of shaky form, Manchester City now finds itself on top of the Premier League table along with Liverpool. In the Champions League, meanwhile, even a narrow defeat in the second-leg, round-of-16 match against Schalke 04 would be enough to advance. And the team could also win the FA Cup.

Off the field, however, the club's leadership is under serious pressure. Due to rules violations, the club finds itself facing expulsion from the Champions League. Revelations made public at the end of last year by DER SPIEGEL exposed flagrant transgressions by Manchester City. The reports were based on internal documents from the club that were provided to DER SPIEGEL bythe whistleblower platform Football Leaks.

The European football association now wants to take a closer look at Manchester City once again. At the same time, there are additional revelations that shed light on the questionable conduct of the club's directors. If UEFA is serious about following through on the strict course announced by its president, Aleksander eferin, it has no choice but to impose tough sanctions against the Premier League titan.

Just how angry some of the association's investigators are that Manchester City evidently deceived them years ago is shown by the reaction of Yves Leterme, the head of UEFA's Investigatory Chamber. A former Belgian prime minister, Leterme said it would be a serious problem if DER SPIEGEL's reporting was confirmed: "This can lead to the heaviest punishment -- exclusion from UEFA competitions," he said.

No Matter What the Cost

In 2014, Manchester City reached a settlement with UEFA to avoid such a penalty. UEFA had discovered violations to its Financial Fair Play (FFP) rules, which prevent club owners from investing unlimited sums of money in their organizations -- a club is not allowed to spend significantly more than it earns. Since Manchester was bought by Sheikh Mansour bin Zayed Al Nahyan, though, the club hasn't made much of an effort to keep its strategy a secret. It has been trying to buy its way to the top of the football world by spending exorbitant sums of money on infrastructure and players -- no matter what the cost.

UEFA investigators didn't believe the club's assertions that certain sponsors from Abu Dhabi had no connection to the sheikh. They suspected that those companies were also utilized as surreptitious investment vehicles to inflate the club's revenues.

The club's boss, Khaldoon Al-Mubarak, said at the time that the settlement felt like little more than a tiny pinch and added that the team would continue pursuing its strategy. Considering the gravity of the accusations facing it, Al-Mubarak's club had gotten off extremely lightly.

The documents provided by Football Leaks made it clear just how brazen Manchester City was willing to be. Beginning in 2012, the team devised a special construct to systematically circumvent FFP rules, with team executives outsourcing costs to other companies, effectively hiding them from UEFA auditors. If they spent more during a season than intended, they had their sponsors from Abu Dhabi increase the fees they paid to the team andbackdated the money transfers to the beginning of the season.

Manchester City has never publicly answered questions about the Football Leaks revelations. Instead, it always provides the same statement, which the club demands be printed in full: "We will not be providing any comment on out of context materials purported to have been hacked or stolen from City Football Group and Manchester City personnel and associated people. The attempt to damage the Club's reputation is organized and clear."

Manchester City CEO Ferran Soriano and Chairman Mubarak have remained silent about the accusations. As for the alleged financier himself, Sheikh Mansour bin Zayed Al Nahyan, a member of the Emirati royal family, has only attended one single Manchester City match in over 10 years of ownership. To celebrate championships, he has his picture taken with his relatives along with enormous cakes. Otherwise, he too remains silent.

Meanwhile, Football Leaks documents now reveal the club apparently wasn't honest with England's football association, either. In summer 2014, the FA seemed to have got wind of a secret Manchester City project. Some months prior, Manchester City had set up a player investment fund aimed at buying shares of football players to make a profit. The practice is known as third-party ownership, or TPO, and it is practical for two reasons.

First, it would give the club some control over the career paths of promising talent. And second, investors would earn money each time the player is transfered because part of the transfer fee would go to shareholders.

Manchester City CEO Soriano tapped a Luxembourg-based company called Mangrove as his business partner. Soriano had founded a consulting firm with one of the company's executives, a Catalonian named Marc Ingla, back in 1993 and he had also worked with Ingla at FC Barcelona. Now, the former colleagues wanted to invest 30 million euros ($34.2 million) together in order to buy shares in up to 70 players from Latin America within 10 years.

But there was a problem: TPO had a bad reputation in the world of football and there was talk of it being a form of "modern-day slavery." Indeed, the practice had been banned within the Premier League. As such, the plan was that the investment fund "should be run separately but receives direction from the corporation CITY football," according to an internal document from October 2012.

The fact that football's global governing body also wanted to ban TPO -- which it finally did in 2015 -- didn't seem to bother Manchester City executives. "Clubs and funds are already looking for and trying alternative schemes to get around the potential ban," an internal paper reads. For Manchester City, this meant one thing: Money that flowed into the funds should simply not be traceable back to the club.

So lawyers answering to the Executive Affairs Authority of Abu Dhabi set up a discreet company in the Cayman Islands to serve as a vehicle for financing the fund. To this day, the head of this government agency is none other than Manchester City Chairman Mubarak.

In summer 2014, the club completed the transfer of a fund-financed player, the Argentinian Bruno Zuculini. He was to be contracted by Manchester City and then loaned out to other clubs in Europe. Manchester City, as required, informed the Premier League and England's football association that a company named MPI owned shares in Zuculini.

The league asked who was behind the company MPI, to which Manchester City lawyer Simon Cliff answered: "MPI is a fund ultimately controlled by a venture capital fund called Mangrove Capital Partners." And where did MPI get its money, the league asked? Cliff responded ingenuously: As far they knew, the money came from Mangrove's owners themselves. There was no word that Mangrove had established the fund together with Manchester City executives. There was no word, either, of a company set up for this fund in the Cayman Islands by the Abu Dhabi Executive Affairs Authority.

Not Much to Fear

The Premier League ultimately approved Zuculini's transfer. Manchester City loaned out the player to six clubs in three years, though he is now back playing in Argentina.

So far, the football associations have not used the material provided by Football Leaks for their own investigation. As long as that remains the case, Manchester City doesn't have much to fear. The holding company City Football Group announced last week that it had bought shares in a Chinese football club. It's the seventh club that now belongs to the international City brand. 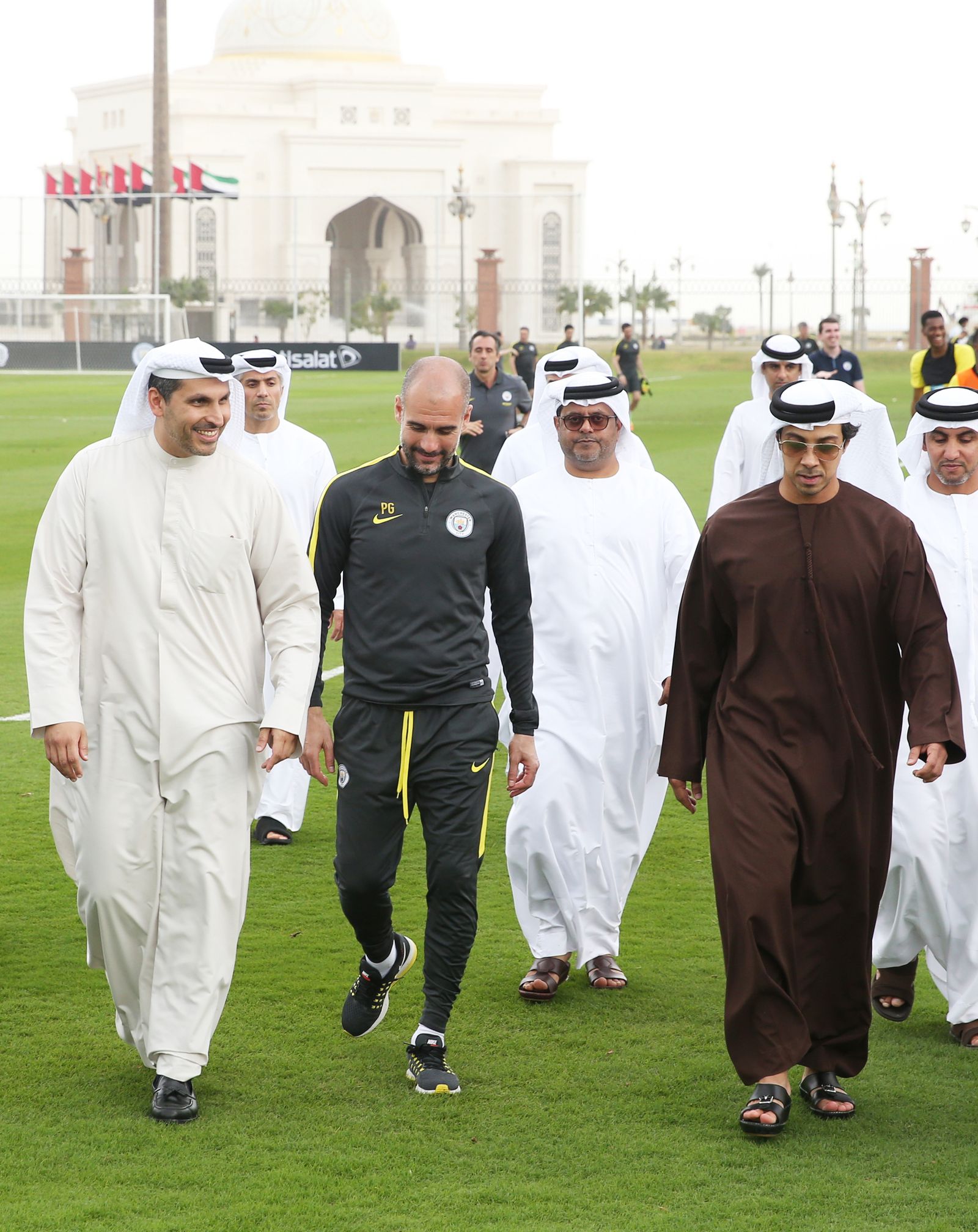