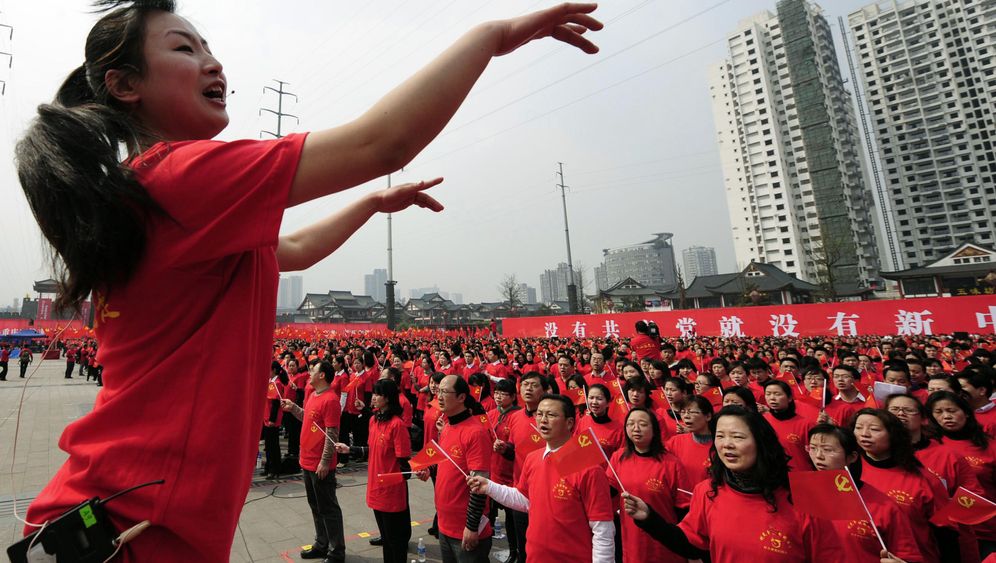 It's a new morning in Chongqing, a major city in southwest China. In a city park, the sound of "Oh, red song" can be heard coming from dozens of voices. The singers are sitting on green and white plastic stools. A few meters away, another group of citizens who apparently love to sing are practicing the revolutionary hymn "Zuguo, nihao!" or "Hello, Fatherland!"

The amateur neighborhood choirs have gathered in front of wooden signs that are placed through the park and encourage citizens to sing "red songs." Elsewhere in Chongqing, the political culture that the Great Leader Mao Zedong once used to provoke China's masses to embark on permanent revolution is blossoming once again.

The city's radio and television stations are also broadcasting revolutionary songs, and instead of the entertainment shows that used to be its customary fare, one channel is showing prime-time documentaries about the historical achievements of the Communist Party. Local newspapers are also firing up the revolutionary campaign.

Chongqing, 1,300 kilometers (800 miles) upriver from Shanghai on the Yangtze, was China's temporary capital during World War II. Today it is a huge construction site made up of rampant skyscrapers and intertwined expressways. About 33 million people live within its administrative limits, while the surrounding hinterlands contain rich deposits of natural gas, coal and iron ore. It is a booming city seeking ideological direction -- with the help of methods that fell out of fashion in China long ago.

But since Bo Xilai, 61, the local Communist Party secretary and former trade minister, has been in charge in Chongqing, Mao has been reinstated as the patron saint in the struggle against all of the possible contradictions of a very real capitalism.

Bo even uses text messages to send inspiring Mao quotes to his fellow citizens, who now find sentences like "The world is ours, we should unite for achievements," or "Responsibility and seriousness can conquer the world and the Chinese Communist Party members represent these qualities," popping up on the screens of their mobile phones.

The rest of the People's Republic is also pricking up its ears. When in 2007 the party sent Bo from Beijing to the often foggy city of Chongqing, which had a reputation for corruption, many saw it as a demotion. At any rate, it seemed clear that Bo had lost the power struggle in the capital over who was to succeed President and Communist Party Chairman Hu Jintao.

But Bo refused to allow himself to be banished from everyday political life. With his shrill recourse to the party's leftist legacy, the provincial leader is being astonishingly brazen in portraying himself as a popular alternative to the Beijing leadership. Unlike Hu and his deputy and probable successor, Xi Jinping, 57, Bo generates enthusiasm among the Chinese with a form of populism generally frowned upon by the rather stiff Communist Party leadership.

Bo began by winning public support with a merciless campaign against the local mafia and the government officials connected to them. He ordered the arrests of an estimated 5,000 people for illegal prostitution, operating gambling dens, weapons possession and other crimes. Thirteen were executed, including the former deputy police chief. Even Chinese legal experts criticized this purge as too authoritarian. For example, Li Zhuang, the prominent attorney of a mafia boss, was sentenced to one-and-a-half years in prison for allegedly urging his client to make false statements.

But instead of diminishing Bo's popularity, the criticism only enhanced it. He is continuing to make radical changes in Chongqing, especially in places where citizens are most likely to notice. Trees are being planted along dusty streets, and the police officers who are now posted at major intersections compete to help citizens instead of harassing them, as they did in the past. As of May 1, Chongqing eliminated school tuition for all children below the ninth grade.

Bo's mix of a tough leadership style and populism is effective in China, where the country's economic miracle is fueling inflation and deepening the gap between rich and poor. So far, party leader Hu has reacted to the overly zealous behavior of his comrade in Chongqing with a conspicuous silence. But Bo is protected against possible attacks from Beijing: For many party members, his Mao quotes sound more politically correct than the slogan, influenced by Confucianism, about a "harmonious society" that Hu constantly invokes.

Another reason why Bo is practically invulnerable is because he is one of the so-called red princelings, the privileged descendents of the People's Republic of China's founders. His father, Bo Yibo (1908-2007), was one of China's "immortal" leaders.

"Bo Xilai is setting the right ideological tone," says Chen Chuan, 36. The deputy propaganda chief of Shapingba, one of Chongqing's districts, Chen organizes the collective singing of red songs in city parks. The same songs can also be heard in karaoke bars. Cities like Shanghai, Wuhan and Changsha are already sending delegations to Chongqing to learn from Bo's methods.

Perhaps the rulers in Beijing believe that singing liberates people and makes their lives easier. Alarmed by the recent popular uprisings in the Arab world, they are increasingly concerned about social stability in their giant realm.

This is precisely why it will be difficult for the Communist Party to pass over the popular hardliner and Mao disciple Bo during the change of leadership that is expected in Beijing next year. A top spot on the politburo would probably be the minimum that would satisfy him.