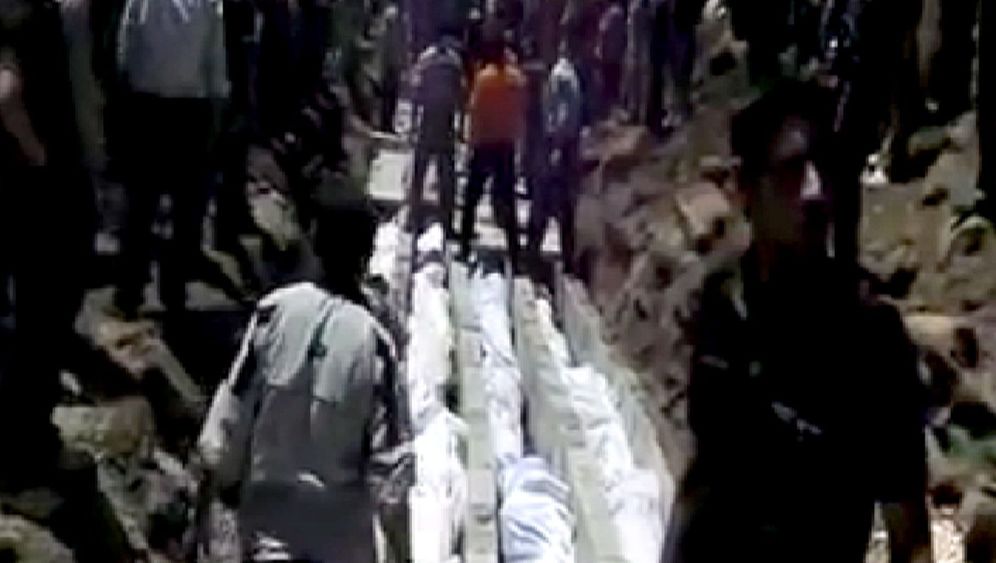 My Lai. Sabra and Shatila. Srebrenica. And now Houla. The sheer intensity of international outrage over the Friday-night massacre means that the village in northeastern Syria could very well join the towns in Vietnam, Lebanon and Bosnia-Herzegovina as short-hand for the murder of defenseless civilians in the post-World War II era. According to the United Nations, at least 100 people were killed in the attack, many of them young children. On Sunday afternoon, the UN Security Council condemned the killings and blamed the regime of Syrian President Bashar Assad for the slaughter.

China on Monday joined the long list of countries to denounce the violence. "China feels deeply shocked by the large number of civilian casualties in Houla, and condemns in the strongest terms the cruel killings of ordinary citizens, especially women and children," said Foreign Ministry spokesman Liu Weimin.

The death toll from the attack continued to rise on Sunday, with several of the 300 people wounded succumbing to their injuries. The number of dead is now thought to be 109 villagers. In addition, some 3,000 people took to the streets of Damascus to protest against the bloody government attack, according to activists. Security forces reportedly fired into the crowd, killing two. Houla, it would seem, is not yet over.

But global disgust has not brought an end to the violence. At least 24 people were killed in the central city of Hama during bombardments on Sunday night, according to the Britain-based Syrian Observatory for Human Rights. Eight of those killed were reportedly children. The bombardment came after several attacks on Assad forces by fighters with the Free Syrian Army, though reports of the violence have yet to be independently verified, Reuters reported.

According to activists, the Friday night slaughter in Houla came at the hands of Syrian security forces and other fighters loyal to the Assad regime. UN observers, who visited the village on Saturday morning, confirmed that evidence -- such as tank shells found at the site -- indicates that regime troops are behind the violence. Images produced during the UN visit intensified the global revulsion: more than 30 of those killed are children under the age of 10. Some of the pictures show children who appear to have been executed with close-range shots to the head.

German Foreign Minister Guido Westerwelle joined the chorus of condemnation on Saturday, saying in a statement that "it is shocking and horrifying that the Syrian regime refuses to cease using brutal violence against its own people. Those responsible for this crime must be brought to justice."

Given the presence of UN observers, the Syrian regime was unable to deny, as it often does, the events that took place in Houla, located not far from the rebel stronghold of Homs. Instead, Damascus claimed that it carried no responsibility, with state television reporting that "terrorists" were behind the bloodbath.

Since the uprising in Syria began some 15 months ago, foreign journalists have been largely prevented from entering the police state, making it difficult to verify reports coming out of the country. Information from Syrian activists, on which most media outlets depend, have furthermore proven unreliable in the past. Even eyewitnesses in the country, who long sought to maintain neutrality, have recently tended toward anti-Assad propaganda, partially a result of the dangers to their lives inherent in their activities. Nevertheless, it is possible to piece together a view of what took place in Houla.

Witnesses say that the incident began in the afternoon, with some 5,000 to 6,000 demonstrators taking to the streets following Friday prayers. Houla is largely focused on farming, but with the nearby city of Homs having become the epicenter of the revolt in the last year, many have become politically active.

That development is a departure from recent decades, during which Houla residents have largely been silent. The town is actually a collection of four Sunni villages, surrounded by three Alawite villages and a Shiite settlement. Assad and most of his government and security units are Alawite, whereas his closest regime allies, Iran and the Lebanese militia Hezbollah, are Shiite. Sunni Houla seemed surrounded by pro-regime towns.

But last winter a unit of the Free Syrian Army took up residence in the town and it has been considered liberated since then. While the Syrian military still controlled roads into the town, residents felt safe in openly protesting the Damascus regime -- as they did on Friday.

During the demonstrations, as had often happened in recent months, army snipers opened fire on the protesters, an eyewitness told SPIEGEL ONLINE. Several people were killed in the salvos and demonstrators dispersed.

As the afternoon progressed, the FSA unit, under the leadership of a commander named Mahmud, decided to take revenge for the deaths. As night fell, the rebel fighters attacked all regime checkpoints in and around the village. Up to this point, the official government version of events is in accordance with these reports, with Foreign Ministry spokesman Jihad al-Maqdisi saying that on Friday afternoon "from 2 p.m. to 11 p.m." there were attacks from "terrorists" against regime troops stationed there.

The End of Peace

An eyewitness reported that the FSA unit suffered significant casualties during their offensive before committing a decisive tactical error. Instead of holding their position in the village, Mahmud elected to withdraw his unit, leaving the villagers unprotected.

At roughtly 11:30 p.m., the Syrian military then began its bombardment of the village, firing tank shells and mortars into town. One witness claimed that rockets were used as well.

Most of the casualties occurred during the bombardment, the eyewitness says. But the eyewitness, whose account could not be independently verified, says that 26 victims were killed by regime supporters who entered Houla during breaks in the bombardment. Many of the perpetrators, the witness claims, came from the surrounding villages.

Regardless of the accuracy of such reports, the events could prove to be a turning point in the Syrian conflict. The images of the dead children moved the Free Syrian Army to declare the UN peace plan to be "dead," and according to the US news broadcaster CNN, one FSA leader has demanded that the killings be avenged. The recent period of uneasy peace would seem to have come to an end.