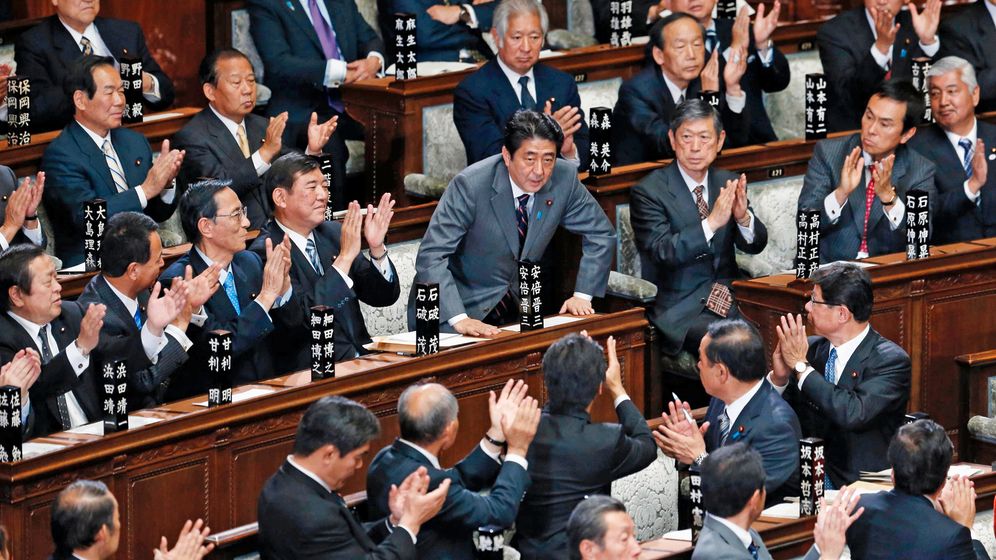 Today's Tokyo has become a permanent mecca of consumption, its boroughs seemingly divided according to target markets. The city's Sugamo district, for example, is dominated by the elderly. Escalators in the subway station there go extra slow, while the stores along the Jizo Dori shopping street offer items such as canes, anti-aging cream and tea for sore joints. The Hurajuku neighborhood, on the other hand, is teeming with fashionistas made up to look like Manga characters.

This world of glitter, however, is but an illusion. For years, the world's third-largest economy has been unapologetically living on borrowed cash, more so than any other country in the world. In recent decades, Japanese governments have piled up debts worth some €11 trillion ($14.6 trillion). This corresponds to 230 percent of annual gross domestic product, a debt level that is far higher than Greece's 165 percent.

Such profligate spending has turned Japan into a ticking time bomb -- and an example that Europe can learn from as it seeks to tackle its own sovereign debt crisis. Japan, the postwar economic miracle, has never managed to recover from the stock market crash and real estate crisis that convulsed the country in the 1990s. The government had to bail out banks; insurance companies went bust. Since then, annual growth rates have often been paltry and tax revenues don't even cover half of government expenditures. Indeed, the country has gotten trapped in an inescapable spiral of deficit spending.

The fact that this tragedy has been playing out in relative obscurity can be attributed to a bizarre phenomenon: In contrast to the debt-ridden economies in the euro zone, Japan continues to pay hardly any interest on what it borrows. While Greece has recently had to cough up interest at double-digit rates, for example, the comparable figure for Japan has been a mere 0.75 percent. Even Germany, the euro zone's healthiest economy, has to pay more.

The reason is simple: Unlike countries in the euro zone, Japan borrows most of its money from its own people. Domestic banks and insurers have purchased 95 percent of the country's sovereign debt using the savings deposits of the general population. What's more, the Japanese are apparently so convinced that their country will be able to pay off its debts one day that they continue to lend their government a seemingly endless amount of money.

Experts warn that this system cannot go on for much longer. Takatoshi Ito, an economics professor at the University of Tokyo, says for example that Japan could become the "next Greece" if its government doesn't change course; the money, he says, will eventually run out. Ito and a colleague have calculated that even if the Japanese people invested all of their assets in sovereign bonds, it would only be enough to cover 12 years of state expenditures.

But who is supposed to come to Japan's rescue once that point has been reached? "If Japan is forced to go looking for investors abroad, a debt crisis will be unavoidable," says Jörg Krämer, the chief economist of Commerzbank, Germany's second-largest bank.

The man tasked with averting this disaster has his office in a building that looks like a fortress compared to the glass-and-steel skyscrapers surrounding it. The walls of the Bank of Japan, the country's central bank in Tokyo, are made of heavy, gray stone decorated with thick columns and gables.

Yet the impression of an impregnable fortress is misleading. The bank's 63-year-old governor, Masaaki Shirakawa -- a thin man with neatly parted hair -- no longer adheres to the disciplined monetary polices his Western counterparts preach. Instead, Shirakawa keeps the money printers going to stimulate the economy. Since 2011, his bank has launched emergency programs with a total volume of around €900 billion. In comparison, the euro bailout funds jointly financed by the euro zone's 17 member states only add up to €700 billion.

For some time now, Japanese banks have been able to borrow money from the central bank at interest rates close to zero. By following this policy, Shirakawa is doing exactly what a number of European politicians -- and particularly ones from cash-strapped Southern European countries -- have been asking the European Central Bank (ECB) to do: He is financing the Japanese government. He denies doing so, and the method he uses are circuitous, but it amounts to the same thing.

So far, though, his strategy has done little to help. "At the moment," Shirakawa admits, "the effect of our monetary policy in stimulating economic growth is very limited." The cheap money is stuck in the banks rather than flowing into the real economy. "The money is there, liquidity is abundant, interest rates are very low -- and, still, firms do not make use of accommodative financial conditions," Shirakawa adds. "The return on investment is too low."

Shirakawa is sitting stiffly in a black leather chair with a straightened back and crossed legs. He carefully weighs each word.

The chief central banker, though planning to retire this spring, is currently under massive pressure. The government of newly elected Prime Minister Shinzo Abe, a conservative, recently made clear that it expects Shirakawa to print even more money. Abe's inauguration took place on Boxing Day.

The prime minister wants to launch a massive new €91 billion ($120 billion) economic stimulus program, refuelling the Japanese economy with public investments in the construction sector. At the same time, Abe wants Shirakawa to pump unlimited cash into the economy. If the central banker is unwilling to go along with those plans, Abe has warned he is prepared to change the law and place the central bank under government control.

It's the kind of idea economists have little regard for. "That would be tantamount to the driver of a car steering towards a wall and putting the pedal to the metal one more time before impact," economist Krämer says dryly. Klaus-Jürgen Gern, an Asia expert at the Kiel Institute for the World Economy, speaks of "pure helplessness".

Central bank chief Shirakawa himself seems unsure of the best way to respond. Four days after Abe's electoral victory, the central banker apparently caved and increased his emergency sovereign bond and securities buying program by a further €90 billion. Observers described it as a Christmas present for the imperious election winner.

Still, it also appears that Shirakawa is likewise aware that he may just be throwing good money after bad -- even if, according to Japanese tradition, he hides the concession behind prim courtesies.

Money is only a means with which "to buy time," he says. "It can alleviate the pain. But the government has to implement reforms too."

That may be, but every political effort that has been made in recent decades to activate the overregulated economy has failed. In the retail sector, for example, proceedings have become hopelessly old-fashioned. The industry has slept through many IT revolutions because the country seeks to "preserve as many jobs as possible through extreme state regulation," says Martin Schulz, who has worked since 2000 at the Tokyo-based Fujitsu Research Institute.

It even appears that election victor Abe may be planning to scrap his predecessor's plan to increase the value-added tax (the VAT sales tax) in several steps, from 5 to 10 percent.

One thing is sure, warns central banker Shirakawa, "If we don't deliver fiscal reform, then the yield on Japanese government bonds will rise."

Were that to happen, it would be tantamount to pulling a card directly from the center of a house of cards. Fully one-quarter of the government's overall budget currently goes toward servicing debt. Were Tokyo forced to pay higher interest rates, it's mountain of debt would grow even more rapidly.

One additional "potential risk," is the "amount of holdings of Japanese government bonds within the banking sector," as central bank chief Shirakawa politely notes. If long-term interest rates were to rise considerably, it could affect the stability of the sector.

That, at the very latest, would mark the point at which the crisis could spill across Japan's borders. In Germany, financial institutions like Mitsubishi UFJ may not be widely known, but they are still internationally networked mega-institutions that have the potential to destabilize the entire finance community.

Predicting the potential effects of the Japanese debt crisis is extremely difficult. But researcher Schulz is convinced that there won't be any "major crash." Out of self-preservation, he says, it is unlikely that large holders of Japanese bonds, such as domestic banks, would shed those bonds very quickly. Such a move would severely damage faith in Japanese debt and, by extension, in the banks that hold that debt. Instead, he predicts "many small crises" in the coming years. He and other economists further believe that there is plenty of room to raise taxes as a countermeasure; taxes in Japan remain relatively low.

Nevertheless, warns Commerzbank economist Krämer, one shouldn't give short shrift to the potential dangers of the Japanese debt crisis. "The psychological effect could be the most dangerous one," he says. What would happen, for example, were investors to suddenly lose faith in other heavily indebted countries such as the US.

"Japan remains one of the world's biggest industrial nations, and the yen is an important currency for international monetary transactions," says Asia expert Gern. "If everything were to spin out of control, then the world would have a real problem."