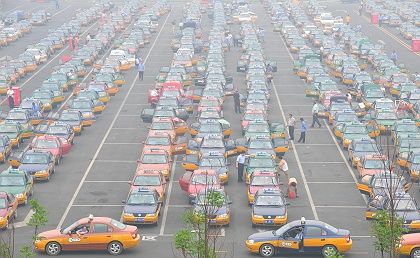 An armada of taxis await passengers at Beijing's international airport.

SPIEGEL: Thanks to the Internet and high-speed transportation, the world is shrinking. Some call it a global village. But the vast majority of people still live in big cities. Why?

Katz: Thirty years ago, a group of futurists in the United States predicted that with technological advances workers could live anywhere. What we have really seen is the opposite. The driving sectors of any advanced nation all crave proximity -- to qualified workers, to universities, to medical research, to first-rate infrastructure. And the talented workers in many countries, particularly the younger ones, crave large communities with diversity and distinctive amenities.

SPIEGEL: So the global village is really a global city.

Katz: It is mostly a network of metropolitan areas that are driving progress and the economy. Look at the US: The top 100 large cities alone assemble 65 percent of the population and 76 percent of gross domestic product. The US is definitely a "metro nation," and that is more or less also true for the rest of the world.

SPIEGEL: But what exactly defines a modern city?

Katz: They are places with a concentration of assets that drive national economies: innovative firms, talented workers, advanced infrastructure, quality communities. And usually with a focus on one or two particular strengths: For instance, for New York or Frankfurt, it is global finance; for Seattle, bio-and info-tech.

SPIEGEL: Which city would you rank as the best -- or most modern -- in the world?

Katz: Well, I'm a bit biased. I grew up in New York, I was educated for a time in London. I think these two places are at the upper end of modern cities.

Katz: All "global cities" face enormous challenges. They have massive traction in the global economy, but they pay a hefty price for their prosperity -- traffic congestion, environmental degradation, rapidly appreciating housing prices, growing social disparities. On the social side, globalization has placed enormous pressure on wages: Individuals with just a high school degree are earning incomes that are barely sufficient to make ends meet. At the same time, workers at the high end of the economy are earning enormous incomes. As a result, large and prosperous cities have the most pronounced income inequities. Also, we see environmental challenges in almost all big cities.

SPIEGEL: It is particularly obvious in booming Asian cities like Shanghai or Mumbai ...

Katz: Exactly. They are polluting their way to prosperity. I don't know how sustainable the progress in Asian cities will be. We saw comparable "dirty" development in the United Kingdom, in the US and in Germany 100 years ago. But today our large cities are post-industrial. Asian cities are vibrant economically, but the environment could become their Achille's heel.

SPIEGEL: What help do large cities worldwide need to cope with such challenges?

Katz: Large cities around the world need strategic advice on how to grow in productive, sustainable and inclusive ways. Our " Urban Age Project," sponsored by the Herrhausen Society is providing very helpful guidance on smart patterns of physical development to fast growing global cities like Mumbai and Mexico City. In the US, Brookings launched an initiative to inform the 2008 election. Our project is intended to convince our national leaders that the ability of any advanced nation to grow and prosper rests largely on the health and vitality of its major cities. Yet, these places also need a strong national government to succeed. In the US, for example, the federal government already spends $50 billion (€39 billion) dollars per year on highways and transit, but there is little rigor in the selection of projects. The result is that we are mostly funding the wrong projects in the wrong places.

Katz: In the aftermath of the Minneapolis bridge collapse, my sense is that Congress is willing to spend more on infrastructure, perhaps even another $100 billion from 2009-2014. The real issue is not whether the US spends more money, but how and where we spend it. That will require a radically different partnership between all levels of government and the private sector.

Katz: Guliani reflects the time he came to power. When people decide to live in or leave a city, here is what they base their decisions on: safe streets, good schools and reliable public services. Guiliani focused on crime and public safety, he brought order to New York. He did not fix the school system or expand the economy. But he did for his time what he had to do. He sent a signal to people in business: New York is a good and safe place to do business.

SPIEGEL: What recommendations would you give the mayor of Berlin?

Katz: I would tell him what I tell all mayors I meet: Your success depends on delivering the basics: security, jobs, transportation.

SPIEGEL: But Berlin is an odd case, isn't it? Mayor Klaus Wowereit calls it "poor, but sexy."

Katz: It is. Many people expected Berlin to become the business center of Central Europe after reunification, but that has not happened. The starting point for European cities, however, will always be different. Just look at inequality: The safety nets are so much better in Europe. Inequality is not as big a problem as in American cities.

SPIEGEL: What are the qualities of a modern mayor of a large city?

Katz: At a time when the United States has become deeply polarized across partisan and ideological lines, mayors are at the cutting edge of leadership and policy innovation. Michael Bloomberg, the self-made billionaire and mayor of New York, is a good example. His leadership on sustainability, transportation and housing comes at a time when our federal government is absent and adrift. Modern mayors see themselves as managers of large corporations. They have to provide a vision. They are very pragmatic. As the mayor of Chicago always says: There is no Republican or Democratic way of picking up the garbage.

SPIEGEL: Do the mayors in Europe or Asia think that way, too?

Katz: In many other countries, the mayors are not that powerful. They are almost arms of the central governments. That needs to change. In this complex world, we need a group of elected officials running things on the ground who are capable of exploiting the opportunities of large cities. They need resources and flexibility. Of course, they also need to be held accountable. They get punished when they do not perform and rewarded when they do. That is a new approach we are pushing for in our Brookings project.