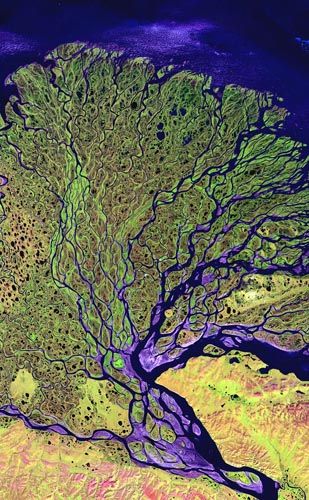 The Lena River flowing through Russian Siberia and empties into the Arctic Ocean. This satellite image shows the river delta, where methane concentrations are unexpectedly high.

It's always been a disturbing what-if scenario for climate researchers: Gas hydrates stored in the Arctic ocean floor -- hard clumps of ice and methane, conserved by freezing temperatures and high pressure -- could grow unstable and release massive amounts of methane into the atmosphere. Since methane is a potent greenhouse gas, more worrisome than carbon dioxide, the result would be a drastic acceleration of global warming. Until now this idea was mostly academic; scientists had warned that such a thing could happen. Now it seems more likely that it will.

Russian polar scientists have strong evidence that the first stages of melting are underway. They've studied largest shelf sea in the world, off the coast of Siberia, where the Asian continental shelf stretches across an underwater area six times the size of Germany, before falling off gently into the Arctic Ocean. The scientists are presenting their data from this remote, thinly-investigated region at the annual conference of the European Geosciences Union this week in Vienna.

In the permafrost bottom of the 200-meter-deep sea, enormous stores of gas hydrates lie dormant in mighty frozen layers of sediment. The carbon content of the ice-and-methane mixture here is estimated at 540 billion tons. "This submarine hydrate was considered stable until now," says the Russian biogeochemist Natalia Shakhova, currently a guest scientist at the University of Alaska in Fairbanks who is also a member of the Pacific Institute of Geography at the Russian Academy of Sciences in Vladivostok.

The permafrost has grown porous, says Shakhova, and already the shelf sea has become "a source of methane passing into the atmosphere." The Russian scientists have estimated what might happen when this Siberian permafrost-seal thaws completely and all the stored gas escapes. They believe the methane content of the planet's atmosphere would increase twelvefold. "The result would be catastrophic global warming," say the scientists. The greenhouse-gas potential of methane is 20 times that of carbon dioxide, as measured by the effects of a single molecule.

Shakhova and her colleagues gathered evidence for the loss of rigor in the frozen sea floor in a measuring campaign during the Siberian summer. The seawater proved to be "highly oversaturated with solute methane," reports Shakhova. In the air over the sea, greenhouse-gas content was measured in some places at five times normal values. "In helicopter flights over the delta of the Lena River, higher methane concentrations have been measured at altitudes as high as 1,800 meters," she says.

The methane climate bomb is also ticking on land: A few years ago researchers noticed higher concentrations of methane in northern Siberia. The Siberian permafrost is known as one of the tipping points for the earth's climate, since the potent greenhouse gas develops wherever microorganisms decompose the huge masses of organic material from warmer eras that has been frozen here for thousands of years.

"A Wake-Up Call for Science"

Data from offshore drilling in the region, studied by experts at the Alfred Wegener Institute for Polar and Marine Research (AWI), also suggest that the situation has grown critical. AWI's results show that permafrost in the flat shelf is perilously close to thawing. Three to 12 kilometers from the coast, the temperature of sea sediment was -1 to -1.5 degrees Celsius, just below freezing. Permafrost on land, though, was as cold as -12.4 degrees Celsius. "That's a drastic difference and the best proof of a critical thermal status of the submarine permafrost," said Shakhova.

Paul Overduin, a geophysicist at AWI, agreed. "She's right," he said. "Changes are far more likely to occur on the sea shelf than on land."

Climate change could give an additional push to these trends. "If the Arctic Sea ice continues to recede and the shelf becomes ice-free for extended periods, then the water in these flat areas will get much warmer," said Overduin. That could lead to a situation in which the temperature of the sea sediment rises above freezing, which would thaw the permafrost.

"We don't have any data on that -- those are just suspicions," the Canadian scientist said. Natalia Shakhova also passed on the question of whether to expect a gradual gas emission or an abrupt burst of large quantities of methane. "No one can say right now whether that will take years, decades or hundreds of years," she said. But one cannot rule out sudden methane emissions. They could happen at "any time."

One thing is clear, though: The thawing of the Arctic sea floor will create "new potential sources for methane ... which no one had reckoned with until now," said Laurence Smith, a professor for geography at the University of California in Los Angeles. Smith is researching North Pole frost zones and expects that a thawing of the permafrost will "supply fuel for methane engines."

The first methane rocket thruster was tested by the US's National Aeronautics and Space Administration (NASA) in 2007, and methane from manure has been collected as "biogas" to heat and power homes in experimental German towns.

In any case, the team taking part in the Siberian study installed a number of probes in the Laptev Sea, a central part of the broad Siberian shelf sea. These probes are measuring the temperature on the upper edge of the submarine permafrost. Overduin wants to pull up the probes in August. Then, for the first time, scientists will have access to a full year's worth of data on the conditions of the sea floor.

For her part, Shakhova thinks researchers should be doing a lot more. She says too little is known about the fragile shelf sediment and the methane it stores, which could be explosive for the environment. "Actually," she says, "this is a wake-up call for science."