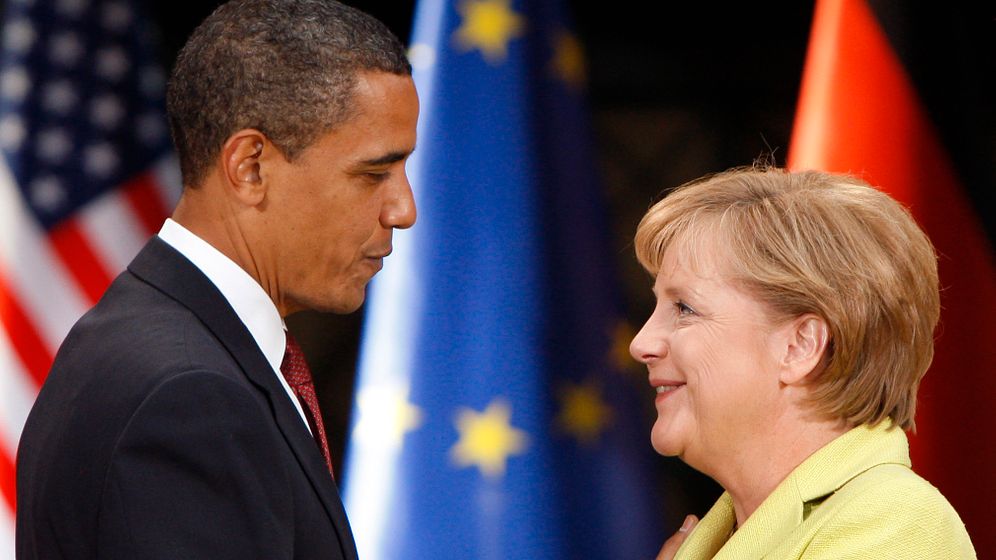 US President Barack Obama was scheduled to visit the Church of Our Lady cathedral in Dresden during a June 2009 whistle-stop visit to Germany. Diplomats from the German Foreign Ministry had painstakingly planned every last detail. They were looking forward to the photographs of Chancellor Angela Merkel with the US president in front of cheering crowds.

But the White House bristled. The president didn't want to do that -- that was the word in Washington. He reportedly placed little value on such photo ops, and he had to leave as quickly as possible, to get to an appearance at the Buchenwald concentration camp. The haggling went back and forth for weeks, and in the end the White House gave in, but only a little. Obama raced through Dresden. After their visit inside the church, Merkel had to shake hands with visitors by herself. The president had already disappeared.

On this day, at the latest, it must have dawned on diplomats that this US president was different from his predecessors. He was someone who did not attach value to diplomatic niceties nor to the sensitivities of his close friends, which he already had proven as a presidential candidate. At that time he put Chancellor Merkel in an awkward position by wanting to make a campaign speech in front of the Brandenburg Gate. This site was traditionally set aside for sitting presidents, which Obama also knew.

The Democrat, who prefers to spend his evenings with his family or alone in front of his computer, has made it no secret in Washington that he does not want to make new friends. That maxim especially applies to his foreign diplomacy. Unlike his predecessor George W. Bush, Obama is loved by the people of the world, but much less by their heads of government. On the heels of recent revelations that US spy agencies might have monitored Chancellor Merkel's cell phone, the complaints about Merkel's "lost friend" Obama are misplaced. Obama doesn't want to be a friend

During a recent visit by a European head of government to Washington, the atmosphere was described as frosty by those in the entourage from Europe. Obama didn't find the time for even a little small talk, the sources said, and "it seemed to some like an appointment with a lawyer."

Obama angered Nicolas Sarkozy by choosing to dine with his family instead of with France's then-president during his visit to Paris. The Polish and Czech heads of state were informed by telephone by the president that a long-planned missile defense system would not be installed in their countries. And when it comes to Britain, traditionally America's closest partner, Obama was initially uncomfortable with the enshrined notion of a "special relationship" between the two countries. He may have expressed his own vision for the friendship when, on his state visit, he brought the queen an iPod as a gift. London was not amused.

The frustration extended well beyond the typical bruised vanities of the Europeans, whom members of the Obama administration like to describe behind closed doors as infantile. An African head of government said during a visit to Washington that he longed for the days of George W. Bush. At least with him, he said, one knew where one stood.

'Coolness Has Its Price'

Israel, one of the closest allies of the US, was irritated that Obama didn't find time for a state visit during his first term in office. Obama let the relationships with Hamid Karzai, Afghanistan's president, and the Iraqi Prime Minister Nouri al-Maliki deteriorate so much that the troop withdrawals grew more difficult.

And Obama promised the Asian diplomats that he would be the "Pacific president," but he just cancelled his trip to the continent because the budget debate was more important to him.

So much non-diplomacy is new among US presidents. Reagan wooed Margarent Thatcher. George H.W. Bush confided in Helmut Kohl as Bill Clinton did in Tony Blair. George W. Bush, who many thought was an isolationist, could count on a whole team of "buddies," such as the then-prime minister of Spain, José Aznar, and the Japanese Prime Minister Junichiro Koizumi. He even entertained them at his ranch in Texas.

Merkel was also invited there, and in return Bush ate a dinner of wild boar in her German electoral district. The chancellor has from time to time said that she values such trans-Atlantic closeness.

That is over. "Coolness has its price," Washington Post columnist Jackson Diehl wrote in 2010, adding that Obama appeared to have no genuine friend among world leaders. But what for? He has the NSA.