The German chancellor was clearly deeply irritated. Already by breakfast, her annoyance had become obvious. But later in the morning, seated next to her Finance Minister Wolfgang Schäuble in a makeshift press room at the Coex Conference Center in Seoul, her mood was clearly sour. Rather than speaking about a G-20 summit that had, in her eyes, been a success, all the German journalists present wanted to know about were the latest rumors from back home: Is Merkel planning a government shake-up? Are Schäuble's days numbered?

Indicating the minister on her right, Merkel said, "we are in complete agreement" that the story has been "totally made up." Schäuble looked at her with an earnest expression and remained silent.

The reason for Friday morning's curt denial could be seen in the arms of Schäuble's international spokesman, Bertrand Benoit, who only a few meters away was holding a copy of the business daily Handelsblatt under his arm. The headline read: "Merkel Plans a Coup." Next to it is a picture of Schäuble. The article claimed that Merkel wanted to get rid of Schäuble as quickly as possible.

Such speculation about the future of wheelchair-bound Schäuble, who only recently got out of the hospital for treatment for wounds that had failed to heal properly, is anything but new. Still, it is not that kind of news Merkel wanted to read this week, just days before her Christian Democrats meet for an important convention on Monday and Tuesday. Coming as it did while she was travelling abroad with the most important member of her cabinet made it particularly annoying.

And, perhaps most importantly, it deflected attention from the issue at hand, the G-20 summit in South Korea, a meeting which Merkel wanted to spin as her own personal success story.

The chancellor has reason to be pleased with the results of the Seoul summit. She enjoyed a preliminary victory in the dispute with the United States over trade imbalances. The American demand for binding limits to be placed on countries with major trade surpluses -- a demand aimed clearly at Germany and China -- has been taken off the agenda for now.

'Laborious and even Difficult' Negotiations

In the closing document, there will be no concrete numbers mentioned. Instead, the document will mention that, in discussions over trade imbalances, several factors must be considered. "We have agreed that sustainable growth and also imbalances should not be tied to a single indicator, but that we need to consider multiple criteria," Merkel said on Friday. She said that the International Monetary Fund (IMF) had made productive suggestions as to "how one can measure such things." Merkel said there had been "agreement" on the issue.

Still, the G-20 agreement merely represents a postponement of the need to face up to global trade imbalances. The closing document does not include a list of the "multiple criteria" that Merkel mentioned -- factors such as government subsidies, protectionist tendencies or demographic developments. Instead, it has been left up to the finance ministers: At next year's G-20 summit in France, they are to present their results. But fresh conflicts cannot be ruled out.

Merkel spoke of "laborious and even difficult" negotiations. Lead negotiators worked on the wording of the closing document until the early morning hours of Friday. Indeed, there were still passages needing closure in the late morning.

Still, Merkel insisted, the "spirit of cooperation won out." The "efforts among the 20 most important industrialized countries to work together" proved victorious. It was perhaps a final barb aimed at US President Barack Obama following their mini-peace summit on Thursday. Merkel had not appreciated the Americans' aggressive tone in the run-up to the G-20 summit. Now, Obama has emerged as one of the losers of the Seoul summit.

Indeed, the testy back-and-forth between Germany, the US and China over trade imbalances and exchange rate manipulations prior to the meeting overshadowed the concrete results that emerged. On Friday, two key reforms were decided upon: G-20 member states agreed to push to improve "bank capital and liquidity standards" as well as to reform the IMF.

The Crisis Is Over -- and Now?

"That is certainly no surprise, rather, it is a big success," Schäuble said, referring to the so-called Basel-III regulations that, a little more than two years after the collapse of US bank Lehman Brothers, will require banks and other financial institutions to keep to a tighter definition of risk provision. By maintaining higher equity of their own, banks should not need millions of euros worth of tax payer's money, should there be a new financial crisis.

According to Merkel, the planned reform of the IMF was met with "no criticism at all and only encouragement." With this reform, booming economic powerhouses like China and India would have more influence in the most important international financial institution -- but they would also have greater responsibilities.

Even if the resolutions on Basel III and the IMF reform were expected, when they are considered together with the minimal compromise in trade negotiations, they should give summit participants a certain sense of relief. The G-20 proved its ability and its determination to act at the peak of the financial crisis, but the real test is still to come. This powerful club must now demonstrate that, even when it is not looking into an economic abyss, that it can provide for sustainable and equitable economic development. What the G-20 needs now is successes.

However, the trade dispute, which has been placed on the sideline for the time being, has also shown that as the world economy recovers, the will to cooperate declines.

"So far we were in a phase of dealing with the crisis, now we are facing a phase of what will the G-20 be like after the crisis," Merkel explained at the summit. What she meant by this was that the G-20's role had not yet been properly defined. Merkel concluded that in 2011, when the French take on the presidency of the G-20, they will have their work cut out for them. 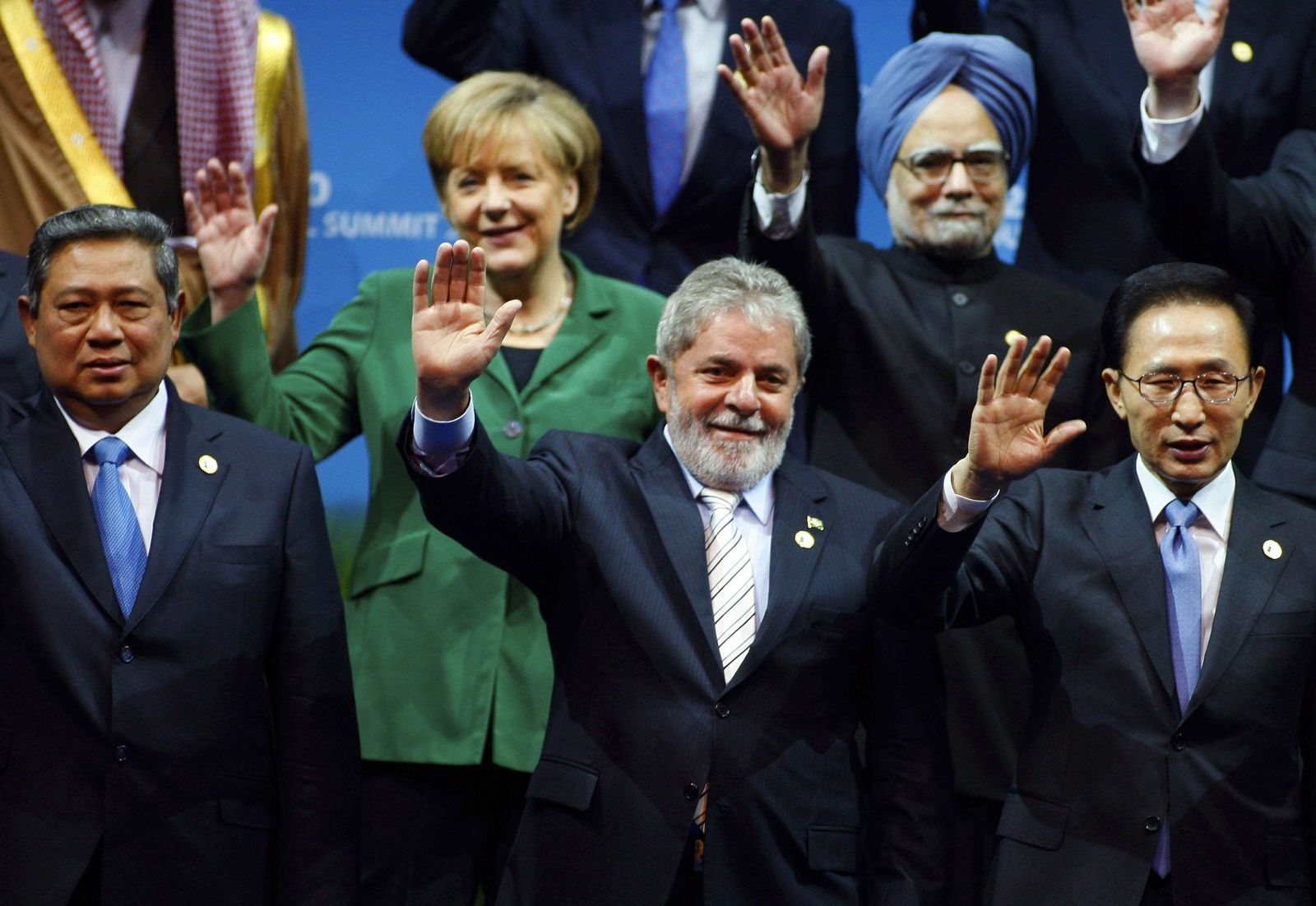 German Chancellor Angela Merkel and other world leaders at the G-20 summit in Seoul.