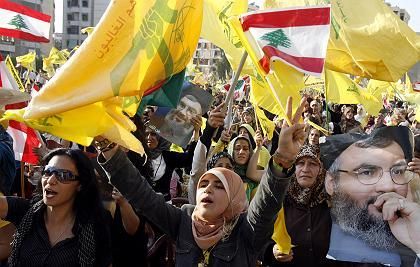 Hezbollah leader Sheikh Hassan Nasrallah, pictured here on placards at a rally in Beirut last week, could gain from a prisoner exchange.

Secret diplomacy in the Middle East is always a sensitive issue. Successive German foreign ministers have realized that, and so has German negotiator Gerhard C., who has been mediating between Israel and the Lebanese Hezbollah for almost two years. For most of that time, the agent of Germany's foreign intelligence service, the Bundesnachrichtendienst (BND), had little to show for his troubles apart a fractured hand sustained in a fall during a secret visit to Israel.

But since last week the German agent, who has been shuttling back and forth between the two sides on behalf of the United Nations, has been able to report signs of progress to his masters in Berlin and New York, and his news gives rise to hope for an easing of tensions in this troubled region. The deal the agent is currently arranging could enter the history books as a masterly diplomatic coup, if it works. German Chancellor Angela Merkel has been informed, as has Foreign Minister Frank-Walter Steinmeier, who travels to Jerusalem this week.

After months of negotiations, which went on even throughout Lebanon's recent government crisis, "Mr. Hezbollah" as Gerhard C. is known in intelligence circles, recently presented the text of a master plan aimed at securing the return of two Israeli soldiers, Ehud Goldwasser and Eldad Regev, both of whom are believed to be dead. Their capture near the Lebanese-Israeli border in a raid by Hezbollah on July 12, 2006, had triggered the 33-day war between Israel and the Lebanese-based guerrillas.

Hezbollah put its secret tunnel system and high-tech weapons to such effective use against the usually well-prepared Israeli army that the war was called a "failure" by the Israeli government-appointed commission that investigated it. In large parts of the Arab world, the militia of Sheikh Hassan Nasrallah has been hailed as the historic victor over the hated Israeli army.

Berlin's master plan envisages that the Israeli government of Prime Minister Ehud Olmert release four Hezbollah militiamen captured in southern Lebanon during the war. Olmert's soldiers weren't able to capture many Lebanese guerrillas, and the four are the last fighters still being held by Israel. In addition, Israel is to hand over the bodies of 10 Lebanese combatants as well as the remains of fighters from previous wars. It would also provide maps detailing the location of minefields Israeli troops set up in southern Lebanon.

The list includes the name of a man who provokes Israeli fury like few others: Samir Kuntar, 45. The member of the Druze religion, a spin-off of Islam, belonged to an Arab terror unit that killed four Israelis in the Israeli town of Nahariya in 1979. Kuntar shot dead a man in front of the eyes of his daughter and then smashed the girl's skull in. The mother managed to hide the second child but it asphyxiated while she tried to calm it down. Kuntar has expressed no remorse for his deed to this day. "The only place for me is at the fighting front which is soaked with the blood of martyrs," he recently wrote to Nasrallah from his prison cell.

In return, Hezbollah is prepared to hand over the bodies of Regev and Goldwasser. Nasrallah's negotiator Hajj Wafik never officially confirmed that the soldiers died but their death is now regarded as a fact in the secret talks. In addition the Shiite group, which receives millions from the Iranian government each year and gets weapons from Tehran and Damascus, is to provide information on the fate of a further Israeli, Ron Arad.

The fighter jet navigator is a national hero in Israel. He was shot down in 1986 over Lebanon and has been missing ever since. He is believed to have been taken to Iran and to have died there. The deal would require Hezbollah to give a detailed report on Arad's fate.

The Israeli government decided in 2004 to link Samir Kuntar's fate with information on the whereabouts of Ron Arad's body. But Olmert's cabinet now seems ready to free the killer. "My brother will soon be home," said Bassam Kuntar. Hezbollah leader Nasrallah says there will be a solution "very soon."

That may be a little too optimistic, because the Berlin master plan also consists of a second part which is no less sensitive: the release by Israel of Palestinian prisoners. In the negotiations over recent months, Hezbollah has insisted that in addition to releasing the four Lebanese militiamen and Kuntar, Olmert must free a large number of Palestinian fighters being held in Israeli prisons. The most recent number being discussed is several dozen. That would enable Nasrallah to present himself as guardian of all "resistance groups" against Israel and as a strategist capable of standing up to Israel not just on the battlefield, but on the diplomatic stage as well.

It's quite possible that the ambitious plan could still fail, because the release of Palestinian fighters would weaken Israel's position against Hamas. The Palestinian group also holds an Israeli soldier, Corporal Gilad Shalit, and is demanding the release of around 450 Palestinian prisoners being held in Israel. The prisoner exchange resembles haggling in a bazaar. If Israel were to release Palestinians in a deal with Hezbollah, Hamas would respond by increasing its own demands, especially given that Shalit is still alive.

Even without this problem Olmert will have trouble selling the return of two dead soldiers as a success. For months, the Israeli negotiators didn't tell the soldiers' families that they believed them to be dead. When Israeli newspaper "Jediot Acharonot" last week confirmed a report in SPIEGEL to that effect, the mother of Ehud Goldwasser was outraged. "Nobody said a word to us."

The prime minister is under severe political pressure as it is. He looks increasingly likely to face a corruption charge after damning court testimony from US businessman Morris Talansky that he handed Olmert more than $100,000. Coalition partner Ehud Barak called on him to resign last week and Olmert's strongest rival, Foreign Minister Tzipi Livni, called for new elections. Critics within Olmert's party would attack the release of Palestinian prisoners as a further sign of weakness. "There is no way we will release Palestinians," vowed Yaakov Edri, a member of Olmert's Kadima party and a minister in his cabinet.

German mediator Gerhard C. is well aware of these objections and has spent months trying to find a solution that enables both sides to save face. There aren't many better suited to the task that "Mr. Hezbollah," who speaks fluent Arabic, is trusted in Jerusalem and Beirut and played a central behind-the-scenes role in the last big prisoner exchange in 2004.

The proposed deal the BND agent developed in accord with the United Nations harbors a major political risk for UN Secretary-General Ban Ki Moon, who wants to overcome the stalemate between the two enemies by segregating the actual deal from the issue of Palestinian prisoners.

The two-step plan envisages allowing some time to pass between the first exchange and the subsequent release of Palestinians. The latter step would officially be billed as a humanitarian gesture by the Israeli government. That would make it hard for Hezbollah to sell the return of anti-Zionist fighters as a triumph for Nasrallah. Israel could imagine such an arrangement, Olmert's chief negotiator Ofer Dekel had indicated to the German mediator -- provided that Nasrallah gave a sign that the soldiers were alive. Now that they are believed to be dead, Israel's willingness to reach a deal has lessened. On the other hand, there is growing pressure for a quick settlement, both from the United Nations and by supporters of a deal in Israel. Decisive talks are now set take place this week in Israel, followed by a final round of shuttle diplomacy by the BND agent between Jerusalem, Beirut, New York and Berlin.

Excitement is running high at both the UN and in the German government ahead of the Israeli government's decision. The issue of Palestinian prisoners remains "on the table", said an Israeli who is accompanying the talks. There's no guarantee that the government will agree to an exchange, said the insider. "But it can't be ruled out either."