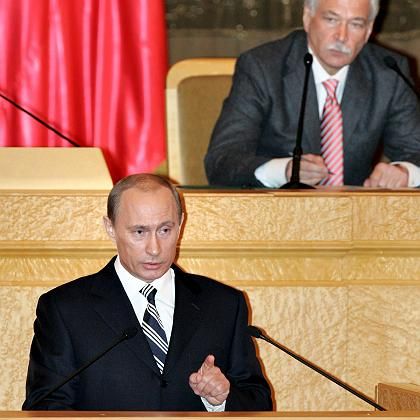 Russian President Vladimir Putin announced Thursday that Russia will impose a moratorium on an arms control deal with NATO.

Conflict over plans by the United States to build a missile defense shield in Europe continues to grow, with Moscow proving resistant to American attempts to include Russia and US Secretary of State Condoleezza Rice slowly losing patience with the "Soviets."

The rhetoric heated up Thursday as Putin, in his annual speech to both houses of parliament, said he was suspending Russia's obligations under the 1990 Conventional Forces in Europe (CFE) treaty, in response to the US missile shield plans. He said the NATO signatories to the treaty were not respecting it, and criticized US plans to locate elements of the anti-missile defense shield in Eastern Europe, saying they create "real dangers and possibly unpleasant surprises." The US claims that the planned missile shield is intended to protect the US and its European allies from a ballistic missile attack from a so-called "rogue" state such as Iran.

"(NATO countries) are ... building up military bases on our borders and, more than that, they are also planning to station elements of anti-missile defense systems in Poland and the Czech Republic," Putin said. "In this connection, I consider it expedient to declare a moratorium on Russia's implementation of this treaty -- in any case, until all countries of the world have ratified and started to strictly implement it. ... I propose discussing this problem in the NATO-Russia Council, and, should there be no progress in the negotiations, to look at the possibility of ceasing our commitments under the CFE treaty."

The 1990 treaty between NATO and the then Warsaw Pact imposed limits on conventional weapons in Europe for both sides. It was later adapted in 1999. However the NATO states have refused to ratify the adapted version of the pact until Russia withdraws its troops from Georgia and Moldova, angering Moscow. 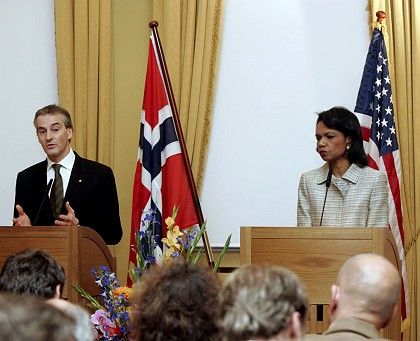 Rice is not impressed by Russian fears of the missile shield.

Putin made the announcement as US Secretary of State Rice and NATO counterparts prepared to meet Russia's Foreign Minister Sergei Lavrov at a NATO-Russia meeting in Oslo. The missile shield plans are expected to dominate the two-day talks.

Rice, speaking before Putin's speech, dismissed Russian concerns that the missile shield could pose a threat to Russia, calling the idea "ludicrous." She also accused the Russians of being stuck in a Cold War mentality -- even as she herself mistakenly referred to Russia as "Soviet."

"The idea that somehow 10 interceptors and a few radars in Eastern Europe are going to threaten the Soviet strategic deterrent is purely ludicrous and everybody knows it," she told reporters ahead of the Oslo meeting. "The Russians have thousands of warheads. The idea that you can somehow stop the Russian strategic nuclear deterrent with a few interceptors just doesn't make sense."

Rice said the United States was willing to keep talking to Russian officials to "demystify" the missile shield -- a project about which some European allies also have misgivings. "We are very happy to continue this dialogue but we have to continue on a basis of a realistic assessments of what we are proposing, not one that is grounded somehow in the 1980s," said Rice.

US Defense Secretary Robert Gates tried to win support for the plan this week during visits to Russia, Poland and Germany, where he attempted to get Russia on board as a partner in the project. "The days of the Cold War are over and no one should seek a return to them," Gates said after meetings in Moscow on Monday. "We invite Russia to join our defensive endeavor as a partner."

Gates said that the missile shield was planned with an eye to future geopolitical developments and is intended to protect against both states and non-state groups which could acquire long-range strike capabilities in the medium term. "We aren't talking about tomorrow or next year but rather thinking about what the world might look like in 10 or 20 years," Gates told reporters in Poland on Tuesday.

Gates and Rice continued the charm offensive with a guest op-ed piece in Germany's center-left daily Süddeutsche Zeitung on Thursday entitled "We Do Not Want a New Arms Race." In the editorial, the two politicians emphasize that the planned system is strictly for defensive purposes. "The system that we are envisioning is limited and the (defensive) missiles are not equipped with warheads," they write. "This system is completely useless against a huge arsenal of nuclear and ballistic missiles such as that of Russia. Talk of a new 'arms race' with Russia is anachronistic and unrealistic."

Diplomats are reported to not be expecting much progress from the meeting with Lavrov. Russia's "bloodcurdling" rhetoric -- to quote one senior NATO diplomat -- has rattled some in Western Europe, who fear the damage done to relations with the Kremlin will outweigh any benefits of the proposed missile shield.

German Deputy Foreign Minister Gernot Erler told the Berliner Zeitung newspaper in an interview in its Wednesday edition that at least six unnamed allies -- including Germany -- had raised doubts about the project at a NATO meeting last week.