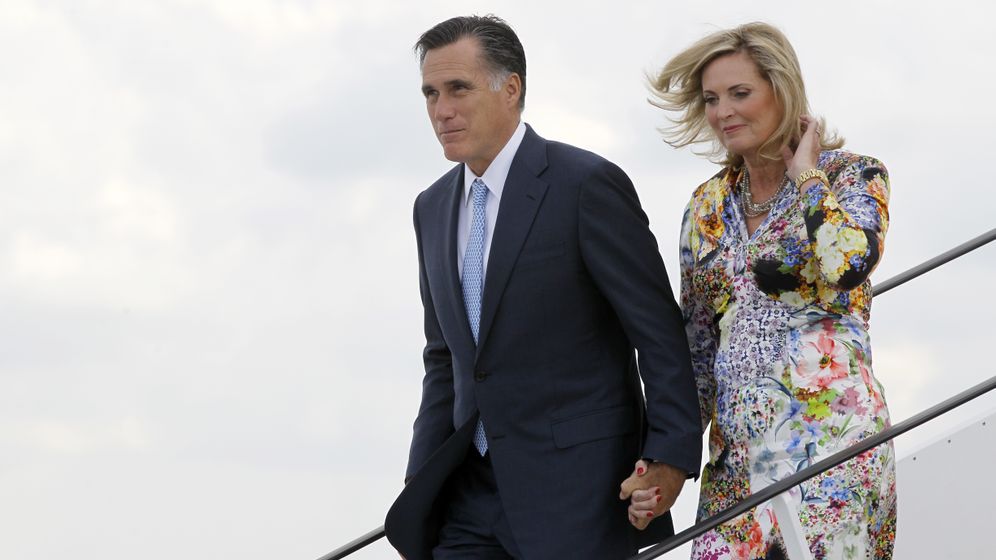 Photo Gallery: A Week of Errors and Fumbles

In the end, Mitt Romney tried to find something positive to say about his European adventure. He said an important lesson he had learned is that "rejection of one kind or another is going to be an important part of everyone's life."

The remark didn't come after the Republican presidential candidate's snafu-filled European tour over the past week. He made it after spending two years as a missionary for the Mormon Church in France in the 1960s, according to his biographers Michael Kranish and Scott Helman in their recent book "The Real Romney". He only managed to convert 10 to 20 people during that time.

Fast forward to last week in Europe, and things haven't really gone any better for Romney. His visits to Britain, Israel or Poland didn't go very well. The result has again been rejection of one kind or another. And the candidate has only himself to blame for this gaffe-filled tour.

It was telling that Romney's spokeswoman, Andrea Sail, was on the defensive right from the start of the trip. At one point she said his words had been "grossly mischaracterized," and at another she denied them completely, saying they were "not true". By Tuesday, his staff was so frustrated that one spokesperson told reporters with the American press corps to "shove it" after they tried to ask questions about his myriad missteps.

First Romney took a swipe at the British, questioning their preparations for the Olympic Games and their enthusiasm. Then, in Jerusalem, he directly compared Israeli gross domestic product to Palestinian per capita GDP, attributing the Israeli's economic vitality to their culture, while at the same time ignoring the Israeli occupation of the Palestinian territories. On Monday, Romney's trip continued to Poland, where the left-leaning national daily Gazeta Wyborcza asked: "Will there be further blunders?"

Things actually went pretty well for Romney on Monday. A visit to the Gdansk shipyard, the birthplace of the Solidarity trade union movement that led the Polish struggle against communism in the 1980s, provided the kind of symbolism Romney favors. He met former Solidarity leader and democracy hero Lech Walesa, who last year refused a meeting with US President Barack Obama but practically gave Romney his endorsement this week. "I wish you to be successful because this success is needed to the United States, of course, but to Europe and the rest of the world, too. Governor Romney, get your success -- be successful," Walesa said through a translator.

But the visit also led to irritation. Solidarity officials criticized the meeting. "Regretfully, we have learned from our friends in the American trade union central AFL-CIO representing 12 million workers about Mitt Romney's support for the attacks against trade unions and labor rights," Andrzej Adamczyk, the head of the union's international department, wrote in a statement.

Romney also failed to find support in areas where one might generally expect him to. In an editorial headlined "No Illusions," the conservative daily Rzeczpospolita wrote the visit was "doubtlessly a nice gesture, but we shouldn't attach too much importance to the event."

It is precisely with these sorts of pleasant gestures that Romney is hoping to impress voters back home in swing states like Michigan, which are home to large numbers of voters with Polish roots. For months, Romney has been seeking to distinguish himself as a critic of Russia, labelling Poland's neighbor as America's "No. 1 geopolitical foe". He won't forget to mention that when he meets Poland's president and foreign minister on Tuesday, and then holds a speech on the value of freedom.

Can it suffice to save his unsuccessful trip? Hardly. The European tour of Barack Obama before the 2008 election is remembered here for the speech he gave to 200,000 people in Berlin. Romney's trip will be remembered for his gaffes.

Things went wrong right from the start of the trip in London, where even Prime Minister David Cameron reprimanded the candidate. "Of course it's easier if you hold an Olympic Games in the middle of nowhere," Cameron said, referring to Romney's management of the 2002 Olympic Winter Games in Salt Lake City, Utah. And then Romney flubbed by telling the press about what was supposed to be a secret meeting with the head of Britain's MI6 intelligence agency.

In Israel, Romney opted for strong messages in a bid to finally score points with Jewish Americans. Gallup polls show Obama with a particularly large lead among this group, with 68 percent of American Jews supporting the president compared to just 25 percent for Romney. But the Republican candidate is equally concerned about attracting the votes of Christian fundamentalists, who tend to appreciate sharp rhetoric when it comes to Middle East policies.

It didn't go well. Speaking to 40 campaign donors in Jerusalem's King David Hotel, Romney said "culture and a few other things" were to thank for the country's economic power. He then went on to compare Israel with the Palestinian territories, saying Israel's per-capita income was more than twice as high. "You notice such a dramatically stark difference in economic vitality," he said. Cultural superiority? Oh dear. "Grossly mischaracterized," Romney's spokeswoman would later say.

This comparison -- which was also incorrect given that the World Bank states that actual Israel's per-capita income is actually 20 times higher -- has infuriated Palestinians. "It is a racist statement," said Saeb Erekat, a senior aide to Palestinian President Mahmoud Abbas. "This man doesn't realize that the Palestinian economy cannot reach its potential because there is an Israeli occupation." Admittedly, Erakat made no mention of Palestinian policies, but he still managed to catch Romney in a Mideast policy gaffe. "It seems to me this man lacks information, knowledge, vision and understanding of this region and its people," Erakat told the Associated Press.

Indeed, Romney's trip to the Middle East turned out to be a perplexing one. Further angering Palestinians, Romney went on to describe Jerusalem as Israel's capital, stating he would like to move the US Embassy from Tel Aviv to the city. Even the US government doesn't recognize Israel's annexation of East Jerusalem.

The trip has cast doubt on whether Romney has the stature to hold the United States' highest office.

White House officials are predictably satisfied with Romney's performance. "It is clear that there are some people who have taken a look at those comments and are scratching their heads a little bit," said White House spokesman Josh Earnest. Even harsher criticism came from the Obama campaign itself, where spokeswoman Jen Psaki said Romney's foreign trip had been overshadowed by a series of "fumbles". As if that weren't enough, Israeli Defense Minister Ehud Barak even came forward with praise for Obama, telling CNN: "This administration under President Obama is doing, in regard to our security, more than anything that I can remember in the past."

In recent days, it appears as though Romney has actually improved Obama's chances of re-election.