Mitt Romney was hoping to start off his European tour with a bang: a meeting with conservative British Prime Minister David Cameron, the opening ceremony of the Olympic Games on Friday and a couple of lucrative fundraising events. The idea was to show the presumed Republican presidential candidate from his best side. After all, he himself successfully managed the 2002 Winter Olympics in Salt Lake City, Utah.

The plan, in short, was a good one, and London is to be followed by quick stops in Poland and Israel. Unfortunately, it didn't take long for Romney to make the kind of negative headlines he had been hoping to avoid. And it has cast a dark cloud over his entire trip.

Perhaps the comment hadn't been adequately vetted. But the Telegraph teased it out for its readers. The remarks, the paper wrote, "may prompt accusations of racial insensitivity" given that Obama's father, after all, was neither white nor Anglo-Saxon. US Vice President Joe Biden reacted strongly by calling the comments "disturbing" and saying the assertion was "beneath a presidential campaign." Obama adviser David Axelrod said that the comment on shared heritage was "stunningly offensive."

And Romney? The candidate has done his best to distance himself from the statements, saying he doesn't know who the source is -- and accusing Biden of reacting to quotes from an unnamed adviser in a "foreign newspaper."

That, though, was just the appetizer. Not long after his arrival in London, Romney joined Brian Williams from the US broadcaster NBC for an exclusive interview. It was a wide-ranging talk, touching on topics as diverse as the shooting in Colorado (the candidate said America did not need new gun-control laws) and his wife's horse Rafalca, which will be competing in dressage at the Olympics ("I will not be watching the event," Romney said).

And then Williams lobbed what should have been a softball question about whether London was well-prepared for the Olympics. Romney could have said how wonderful it was to be in such a great city full of wonderful people and rich history. Instead, he said: "There are a few things that were disconcernting, the stories about the private security firm not having enough people, the supposed strike of the immigration and customs officials, that obviously is not something which is encouraging."

As if that weren't enough, Romney also seemed to take aim at the British people. "Do they come together and celebrate the Olympic moment? That is something which we only find out once the Games actually begin."

Not surprisingly, the British press jumped on the comments. As did British leaders. During a rally to celebrate the end of the torch relay in Hyde Park, London Mayor Boris Johnson said to the gathered crowd: "There's this guy called Mitt Romney who wants to know whether we are ready."

And Prime Minister Cameron also chided the Republican candidate. "We are holding an Olympic Games in one of the busiest, most active, bustling cities anywhere in the world," he said. "Of course it's easier if you hold an Olympic Games in the middle of nowhere."

Chagrined, Romney quickly did something that Americans have become used to from him: He flip-flopped. In comments to the press afterward, he conceded that it is "impossible for absolutely no mistakes to occur." And added that, once competition starts, "those are all overshadowed by the extraordinary demonstrations of courage, character and determination by the athletes."

Still, Romney wasn't quite done making headlines. It was, after all, a long day full of meetings with a variety of people, including Labour party head Ed Miliband, who Romney addressed as "Mr. Leader."

And then there was another appointment. "I can only say that I appreciated the insights and perspectives of the leaders of the government here and opposition here as well as the head of MI6 as we discussed Syria and the hope for a more peaceful future for that country," he said at a news conference.

Oops. The meeting with MI6 head Sir John Sawers was supposed to remain secret. That, at least, had been the agreement beforehand. 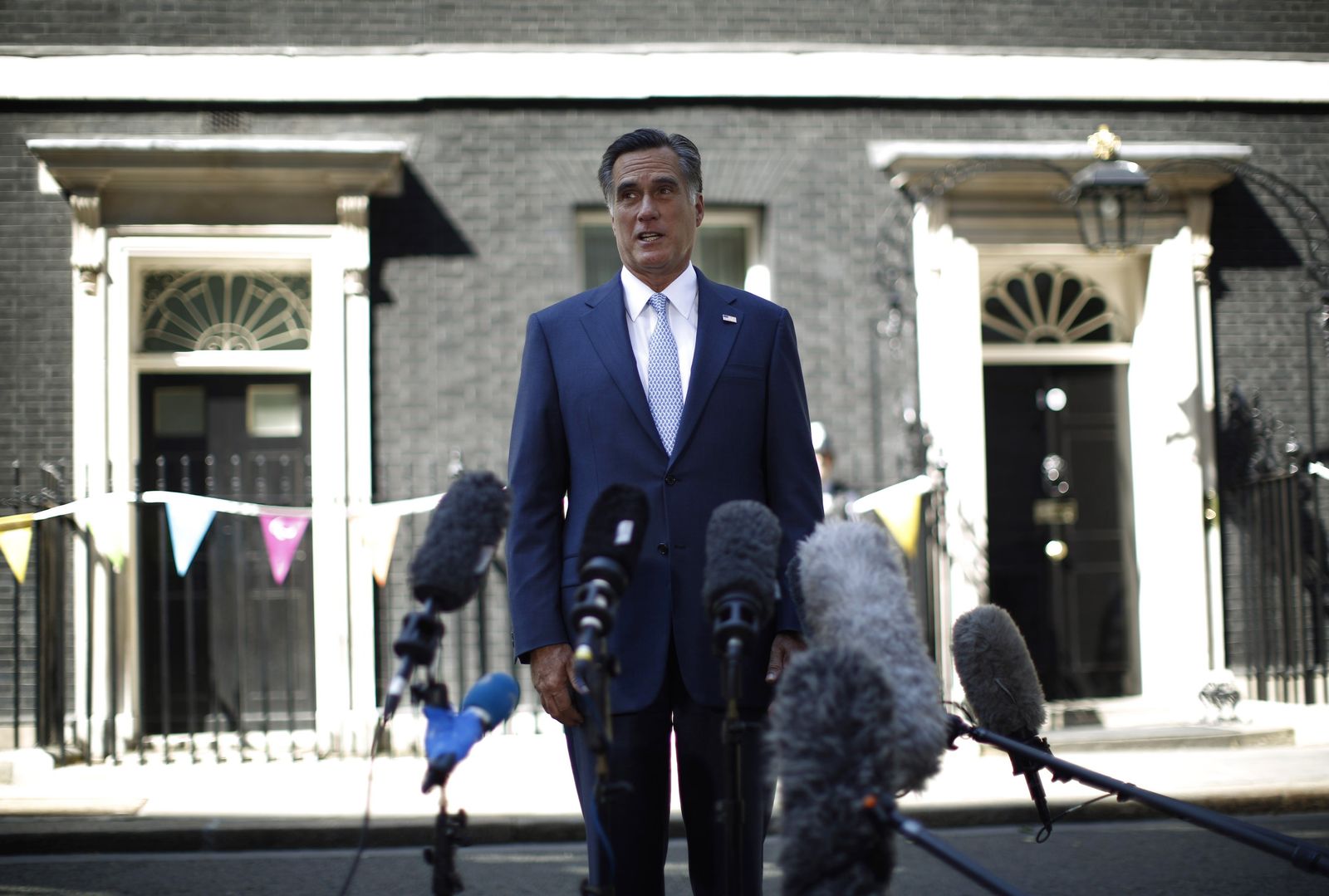 Mitt Romney in front of 10 Downing Street in London on Thursday.