SPIEGEL: Mr. ElBaradei, the opposition in Egypt has called for a nationwide "Day of Anger" on Tuesday. Do you support the protests?

ElBaradei: Yes, I do. I stand behind any peaceful demand for change. My call for reforms has gone unheard with the regime, which leaves taking to the streets as the only option. These are young, impatient people who are now demonstrating their resolve, and I very much hope that the protests will not get out of hand.

SPIEGEL: Do you believe that the protests will truly lead to change?

ElBaradei: They mark the beginning of an historic process. The Egyptians have recognized that they must take their fate into their own hands. For the first time in the country's recent history, they are really prepared to take to the streets. The culture of fear that the regime cultivated has been broken. There is no turning back now. Activists anticipate the biggest demonstrations in decades. These protests are a snowball that could turn into an avalanche.

SPIEGEL: And the regime will simply look on and do nothing?

ElBaradei: I hope that the security forces do not use violence against the protesters. I appeal to (Egyptian President Hosni) Mubarak not to allow the situation to escalate. The regime should respect the universal right of the freedom to demonstrate.

SPIEGEL: Will you take to the streets yourself?

ElBaradei: No, I don't want to rob the people who have called for the protests of their victory. But I will support them in any way I can. At the moment I am more useful to the movement on a strategic level, even at times when I don't happen to be in Egypt, than I would be on the street.

SPIEGEL: As a potential challenger to Mubarak in the upcoming presidential election in September, you want change through elections. Is it too late for that now?

ElBaradei: It is quite possible that my country is facing a phase of instability. Freedom has its price. But everyone, from the Marxists to the Muslim Brotherhood, agrees that stability has to be our goal.

SPIEGEL: You want a modern, democratic Egypt. But the people on the street aren't just calling for freedom and dignity -- they also want bread.

ElBaradei: These demands are understandable in a country in which more than 40 percent of the population earns less than $1 a day. In our case, (the protests) also revolve around basic needs, which makes Egypt different from Tunisia. It has a broad middle class, while we could face a revolt by the poor and the frustrated.

SPIEGEL: The self-immolation of a vegetable seller triggered the revolution in Tunis. Several people have already set themselves alight in Egypt, but Mubarak seems unmoved.

ElBaradei: Don't be deceived. This composure is just a façade. Secretly he is extremely nervous. He never listened, and he isn't listening today either. The regime doesn't want to see or hear anything. I warned Mubarak about this development. Now he's getting what he deserves.

SPIEGEL: Can he still prevent the protests from spreading?

ElBaradei: To do so, Mubarak would have to not stand for election and he would have to allow a democratic constitution that makes free elections possible. And naturally the martial law that has been imposed on the country for the last 29 years would have to be lifted. Without these concessions, the regime will not survive.

SPIEGEL: Israel fears a revolution in Egypt. Many people in Jerusalem believe that the Muslim Brotherhood would then come to power and declare war on the Jewish state.

ElBaradei: We should stop demonizing the Muslim Brotherhood. It is incorrect that our only choice is between oppression under Mubarak and the chaos of religious extremists. I have many differences with the Muslim Brotherhood. But they have not committed any acts of violence in five decades. They too want change. If we want democracy and freedom, we have to include them instead of marginalizing them.

SPIEGEL: Do you agree with the "domino effect" theory which argues that the revolution in Tunis is only the beginning?

ElBaradei: Perhaps we are currently experiencing the first signs of an "Arab Spring" (e.g. similar to the so-called Prague Spring of political liberalization in Czechoslovakia in 1968). Our neighbors are watching Egypt, which has always played a pioneering role. I hope that my country will be one of the first in which freedom and democracy blossom. We Egyptians should also be able to achieve what the Tunisians have done. 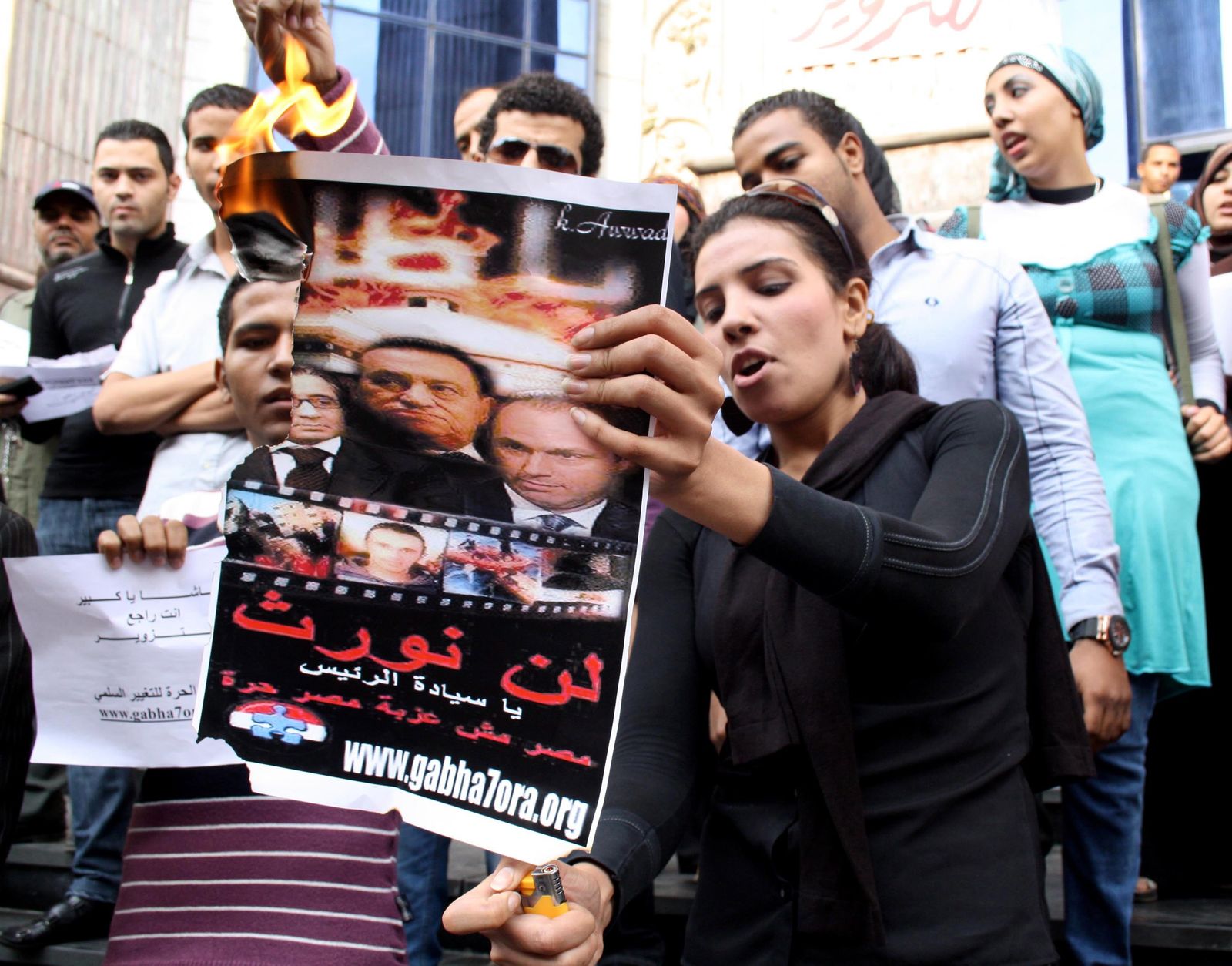 An opposition protest in Cairo during Egypt's parlimentary elections on Dec. 5, 2011