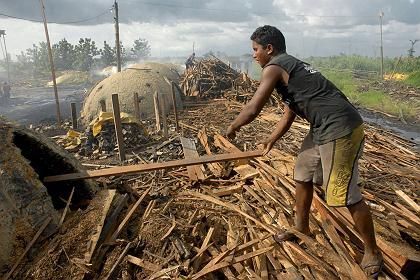 Deforestation costs more than the banking crisis, a study shows.

How to put a price tag on nature? That conundrum is at the heart of research by a team headed by Deutsche Bank economist Pavan Sukhdev. They have found a way of calculating a figure for environmental damage and loss of biodiversity in forests. And the price is high: At between $2 trillion and $5 trillion per year it dwarfs the cost of the current financial crisis which economists gauge at about $1.5 trillion.

Entitled "The Economics of Ecosystems and Biodiversity," the report was originally published in May but has returned to the spotlight at the World Conservation Congress in Barcelona this week. Conservationists gathered at the event have said it underscores the need to ramp up funding for environmental protection.

And when making traditional economic calculations, it is all too easy to overlook natural reserves like food, fibers, fuel, clean water, healthy soil and protection from floods, the report said. "Though our well being is totally dependent upon these 'ecosystem services' they are predominantly public goods with no markets and no prices, so they often are not detected by our current economic compass."

In order to pinpoint an accurate price, the researchers added the values of the various services offered by forests, such as absorbing carbon dioxide and providing clean water.

Sukhdev and his team, which has been compared to the high-profile Stern Review into the economics of climate change, concluded that forest decline costs about 7 percent of global GDP. They are now working on a second phase of their study, this time probing the value of other natural systems.

The picture they are painting is bleak. Firmly entrenched global trends like population growth, changing diets, urbanization and climate change are all taking a toll on biodiversity. And earlier this week a closely-watched inventory, the Red List of Threatened Species, showed that time is in short supply. It concluded that half the world's mammals are declining in population and more than a third will probably face extinction. There may well be more steep bills coming up.