The timing could not have been worse. Just as the heads of state and government from NATO's 28 member states were assembling in front of Chicago's football stadium on the shores of Lake Michigan for a group photo, thunder began booming over the city as a storm rolled in. Quickly, President Barack Obama's team switched to plan B and moved everyone into the conference room instead. Host Obama stood on the red carpet surrounded by his guests. "Wave," he said. And they did.

It was designed to be an image of harmony. Everyone together. That is the message that Obama wants to send from this NATO summit, the largest ever. The US president, after all, is in the middle of a tough re-election campaign and the summit, located in Obama's hometown of Chicago, was designed to give him a boost.

But Obama faced battles on several fronts over the weekend. For one, he faces the possibility of lasting friction with Russia after NATO on Sunday declared its European missile shield to have reached "interim capability," an important step on the road to full coverage planned for 2018. The shield is to protect Europe from possible attacks from countries like Iran, but Russia views the weapons system as a limitation of its own nuclear deterrence and has thus sought for years to prevent its completion.

Afghanistan too is a significant focus of the summit, which continues on Monday. When he was elected four years ago, Obama promised that he would bring the war against the Taliban to an end. Some 1,900 American soldiers have lost their lives in the decade-long fight and the mission costs US taxpayers $100 billion (€78 billion) each year.

It is a bill that the White House would like to significantly reduce. And it would also like more help from alliance partners in keeping NATO up and running as well. Indeed, with European governments having reduced their military budgets continually since the end of the Cold War, the US share of NATO financing has grown to 75 percent. Now that the debt crisis has put additional pressures on both Europeans and Americans to slash expenditures, alliance funding is the key question underlying the meeting.

Former US Secretary of Defense Robert Gates hinted at the brewing frustration in Washington a year ago. "The blunt reality is that there will be dwindling appetite and patience in the US Congress -- and in the American body politic writ large -- to expend increasingly precious funds on behalf of nations that are apparently unwilling to devote the necessary resources or make the necessary changes to be serious and capable partners in their own defense," Gates said in his final policy speech as head of the Pentagon last June.

Obama seeks to cut US defense expenditures by $500 billion over the next 10 years. Furthermore, should the Democrats and Republicans in Congress not be able to reach a deficit reduction deal by the end of this year, automatic cuts would be triggered in January 2013 which would result in a further $500 billion being withheld from the Pentagon in the next decade.

In a guest commentary for the Chicago Tribune, Mitt Romney, Obama's Republican challenger in November presidential elections, accused the president of weakening the NATO alliance. "The administration's irresponsible defense cuts are clearing the way for our partners to do even less," Romney wrote. "An alliance not undergirded by military strength and US leadership may soon become an alliance in name only."

Obama, for his part, sought to demonstrate strength despite potential funding shortfalls. "In these difficult economic times, we can work together and pool our resources," Obama said during the summit. "NATO is a force multiplier, and the initiatives we will endorse today will allow each of our nations to accomplish what none of us could achieve alone."

The message is clear. The US is no longer prepared to be the alliance's military backstop -- as the only member state with requisite weapons systems. Instead, the idea is to develop common military systems and defense products. NATO refers to the concept as "Smart Defense." Just how it might work -- more military clout for less money -- remains to be seen however.

At issue are some 20 projects, ranging from the acquisition of helicopters to joint command headquarters. The plan known as "Alliance Ground Surveillance (AGS)," for example, foresees the purchase of five drones from the US at a total price of €1 billion. NATO Secretary General Anders Fogh Rasmussen pledged in Chicago that alliance leaders had approved "a robust package of more than 20 multinational projects to provide the capabilities we need at a price we can afford."

Underneath the surface, however, it becomes clear that harmony is not universal when it comes to these joint projects. Seventeen countries, for example, signed onto the AGS project back in 2007. Since then, however, four have backed out after defense budgets were slashed back home. Germany is one of the countries that remains committed to the project, but the more alliance partners back out, the more expensive it becomes for Berlin and the others who remain. Furthermore, Germany's signature to the project was conditional and parliament in Berlin has yet to approve the funding.

Meanwhile, NATO has upped the pressure on Germany to increase its commitment to the alliance by reducing the amount of say the parliament in Berlin has when it comes to NATO missions overseas. Currently, any foreign military mission involving German troops needs the approval of Germany's parliament, the Bundestag. But that also means that, should parliament withhold such approval, the effectiveness of joint NATO weapons systems dependent on German technicians is significantly reduced.

The Brussels-based alliance is now pressuring Berlin to reduce the amount of say parliament has when it comes to NATO missions. Alliance leaders point out that the deployment of joint weapons systems cannot be made dependent on the approval of a single nation's parliament. Berlin will have little choice but to at least consider the request, to avoid isolation within the alliance.

The real success of the NATO summit, however, will be decided on Monday. That is when member-state leaders are to address the planned withdrawal from Afghanistan and its consequences. Only then will it become clear whether the summit will provide Obama with the hoped-for boost to his re-election campaign. 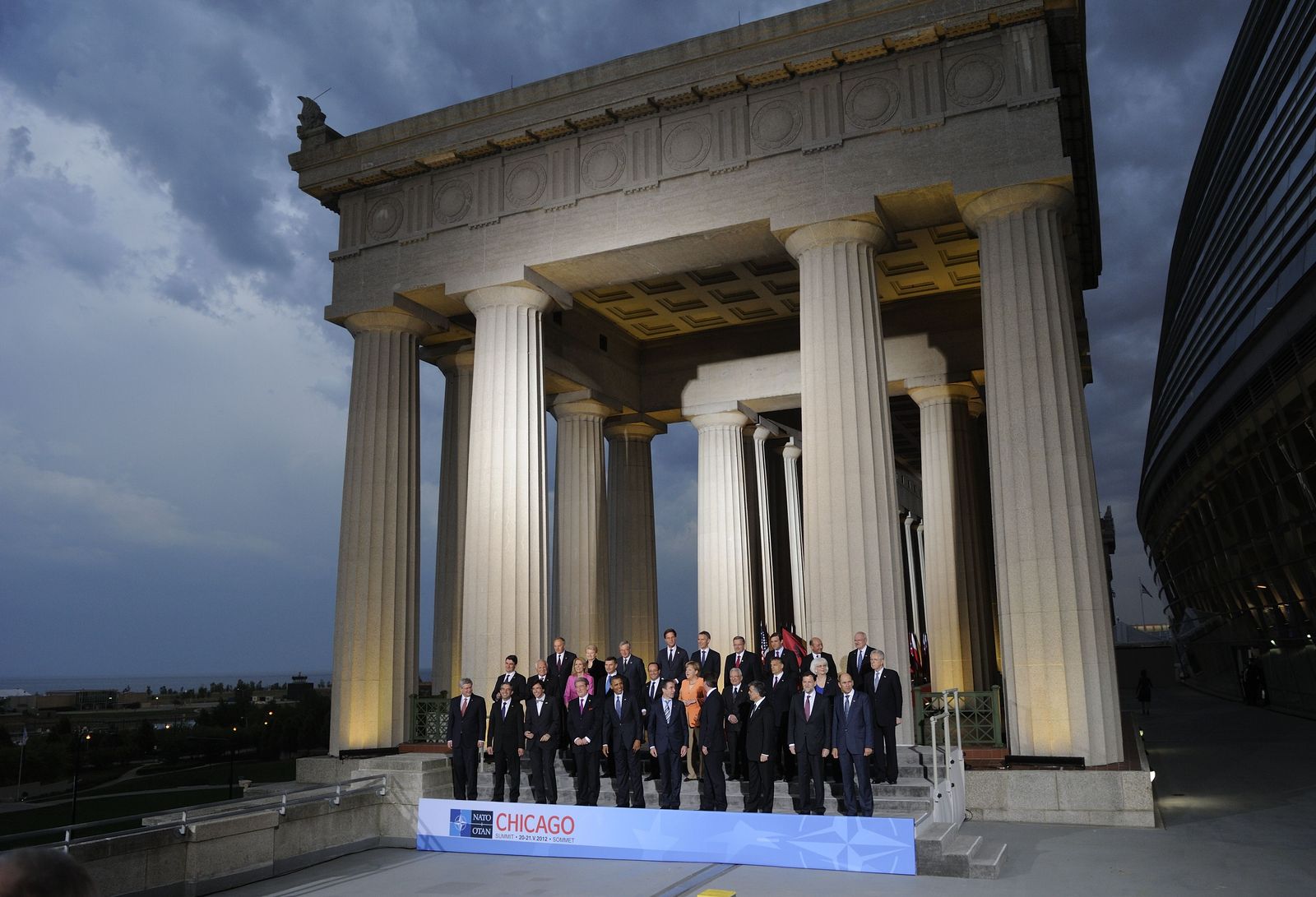 NATO leaders gather outside of Soldier Field in Chicago for their group photo.