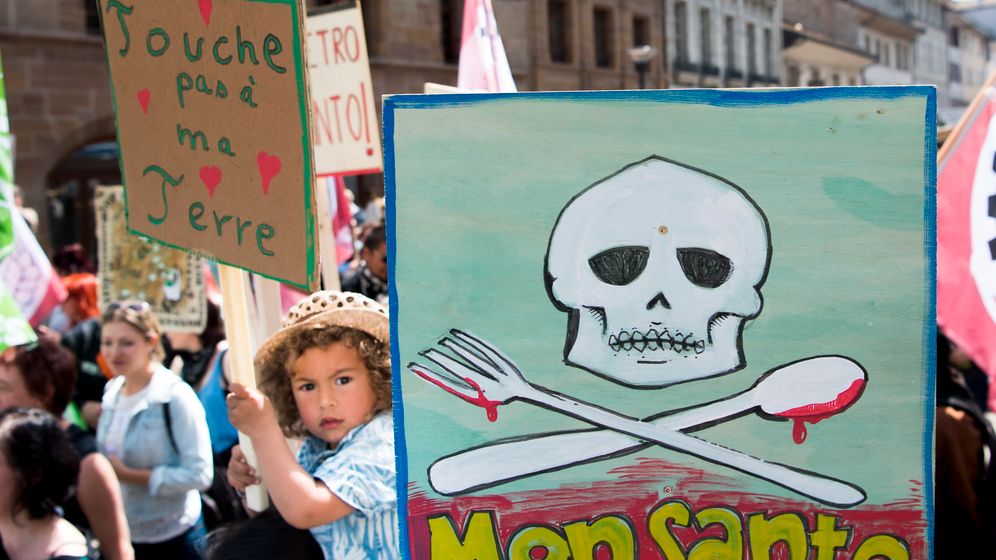 Some companies' reputations are so poor that the public already has low expectations when it comes to their ethics and business practices. That doesn't make it any less shocking when the accusations against them are confirmed in black and white.

Agricultural chemicals giant Monsanto is under fire because the company's herbicide, Roundup (active ingredient: glyphosate), is suspected of being carcinogenic. Permission to sell the chemical in the European Union expires on December 15 with member states set to decide on Wednesday whether to renew it for another 10 years. And now, the longstanding dispute about glyphosate has been brought to a head by the release of explosive documents.

Monsanto's strategies for whitewashing glyphosate have been revealed in internal e-mails, presentations and memos. Even worse, these "Monsanto Papers" suggest that the company doesn't even seem to know whether Roundup is harmless to people's health.

"You cannot say that Roundup is not a carcinogen," Monsanto toxicologist Donna Farmer wrote in one of the emails. "We have not done the necessary testing on the formulation to make that statement."

The email, sent on Nov. 22, 2003, is one of more than 100 documents that a court in the United States ordered Monsanto to provide as evidence after about 2,000 plaintiffs demanded compensation from Monsanto in class-action suits. They claim that Roundup has caused non-Hodgkin's lymphoma, a form of lymph node cancer, in them or members of their family.

The documents suggest the company concealed risks, making their publication a disaster for the company. The matter is also likely to be a topic of discussion at Bayer, the German chemical company in the process of acquiring Monsanto.

"The Monsanto Papers tell an alarming story of ghostwriting, scientific manipulation and the withholding of information," says Michael Baum, a partner in the law firm of Baum, Hedlund, Aristei & Goldman, which is bringing one of the US class actions. According to Baum, Monsanto used the same strategies as the tobacco industry: "creating doubt, attacking people, doing ghostwriting."

Glyphosate is the world's most used herbicide. Companies like Monsanto, Syngenta and Bayer produce more than 800,000 metric tons of the subtance every year and sell it around the world. Farmers use the agent to clean the slate while preparing fields for the new sowing season, or spray it on potato or rapeseed fields to kill the plants just before maturity, making harvesting easier.

The popular agricultural chemical has been in use for more than 40 years and can now be found almost everywhere: in the urine of humans and animals, in milk, in beer, in ice cream, and above all in feed pellets from the United States and Brazil, which also end up being fed to German cattle and pigs.

Glyphosate was long considered harmless to human health because it inhibits a metabolic pathway that is essential for plants but does not occur in mammals. But is the product really that harmless? In March 2015, one of the world's highest authorities raised doubts about the pesticide. The International Agency for Cancer Research (IARC), a body under the umbrella of the World Health Organization, classified glyphosate as "probably carcinogenic to humans." The decision triggered class action lawsuits in the USA.

But it turns out Monsanto expected the IARC decision. Researchers at company headquarters in St. Louis knew from the outset that the panel of experts would issue a cancer warning.

"What we have long been concerned about has happened, " Farmer, the toxicologist, wrote in September 2014. "Glyphosate is on for an IARC review in March of 2015." A month later another Monsanto scientist, William Heydens, expressed more specific concerns. He wrote that Monsanto not only has a "vulnerability in the area of epidemiology," but also potentially in the areas of "exposure, genetox and mechanism of action." Genetox is short for genotoxicity and describes whether a substance causes damage to genetic material, which in turn can cause cancer.

Epidemiological studies can be used to ascertain whether the occurrence of disease is associated with certain substances, and help the IARC make its decision. Studies in the United States, Canada and Sweden suggest that glyphosate increases the risk of developing lymphatic cancer.

According to one email, Monsanto conducted no "such testing" on the "carcinogenicity" of Roundup. Another one reads: "We do not conduct any subchronic, chronic or teratogenicity studies with our formulations." The latter would show whether Roundup can cause deformities, as some studies suggest. Rat embryos sprayed with diluted Roundup, for example, developed skeletal damage.

Monsanto didn't even trust its own experts. This is how Farmer summed up an analysis by Monsanto consultant James Parry: "Dr. Parry concluded in his evaluation that glyphosate is capable of producing genotoxicity." But Farmer did not want this to be seen as a warning. Instead, she wrote, further studies should be sent to him in order to "move Dr. Parry from his position."

Glyphosate appears not to be as harmless as the industry likes to claim, in part because it also kills many microorganisms in addition to plants. Although this is unlikely to directly affect humans and animals, it does apparently affect the millions of bacteria in the intestinal flora known as the microbiome.

Leipzig-based veterinarian Monika Krüger has observed that the prevalence of certain microorganisms in the rumen changes when cattle feed on pellets containing glyphosate, and that this affects the health of the animals. However, the German Federal Institute for Risk Research (BfR), which is responsible for the assessment of glyphosate in the EU, disagrees with her conclusions.

The Monsanto researchers also behaved irresponsibly when it comes to the question of Roundup's absorption into the body. In their own animal experiments back in 2002, the company's experts discovered that "between 5 and 10 percent" of the substance penetrated the skin of rats.

The rate was much higher than expected and the result had the potential to "blow" the "Roundup risk evaluations," reads one e-mail. As a consequence, the author of the email wrote: "We decided thus to STOP the study." Laboratory animals also absorbed more Roundup ingredients through the digestive tract than had been hoped for.

Above all, the Monsanto papers show that the experts were very aware of a fact that is often lost in the public debate: In addition to glyphosate, herbicides like Roundup contain other dangerous chemicals that are necessary to enable the active ingredient to penetrate hard plant walls, among other things. These ingredients are often more harmful than the active ingredient on its own.

As a result of years of industry lobbying, many regulatory agencies assess the toxicity of glyphosate in isolation, but not that of the mixtures that are sprayed.

The Environmental Protection Agency in the United States, the European Food Safety Authority and the BfR all carry out so-called risk analyses. In the studies evaluated for this purpose, researchers drip pure glyphosate into rat feed. Then they determine the amount of glyphosate at which no damage is inflicted on the animals. Other studies determine the actual concentration of the substance in the environment. The substance is deemed safe for use if the two values are far apart, as is the case with glyphosate, which is which why it was deemed non-carcinogenic.

The hazard-related assessment that led to the IARC decision is different. Researchers at the agency investigate whether a substance is dangerous in principle, irrespective of the dose. They also evaluate what happens when the complete mixtures, in this case Roundup, are sprayed. Although it is difficult to effectively control the conditions in such epidemiological studies, they are a more accurate reflection of reality - and led to the IARC verdict: probably carcinogenic.

The Monsanto experts came to a similar conclusion. "Glyphosate is OK, but the formulated product causes the damage," Monsanto researcher Heydens wrote to Donna Farmer.

Monsanto did nothing to warn the public. Instead, the company continued its massive lobbying campaign and did everything conceivable to discredit researchers whose work was not in Monsanto's interest.

One of the victims of their campaign was French toxicologist Gilles-Éric Séralini. He did exactly what Monsanto should have done. For two years, Séralini dripped Roundup into the drinking water of laboratory rats and fed them glyphosate-laden, genetically modified corn. What he found was alarming: Some of the animals developed kidney damage, while the females developed breast cancer at remarkably high rates.

When the journal Food and Chemical Toxicology published the study in September 2012, all hell broke loose in Séralini's life. Hundreds of researchers protested and Séralini was accused of making "false statements" and "using animals for propaganda purposes." The journal withdrew the publication in November 2013. It may have been a coincidence, but the magazine had appointed a former Monsanto employee to its advisory board six months earlier.

The internal memos also confirm how Monsanto exerted pressure. David Saltmiras, a Monsanto expert at the time, boasted that he had "successfully facilitated numerous third party letters to the editor." He described his actions as being "in our own best interest" and as "the last rites for Séralini's few remaining shreds of credibility."

The methods of Séralini's work were indeed open to criticism, which made it easy for the Monsanto expert. But the same pattern occurred after the IARC's hazard assessment. In that case, Monsanto even prepared a detailed "preparedness and engagement plan" to challenge the conclusions reached by the IARC cancer experts.

The company hired a team of researchers and lobbying experts hoping to "orchestrate outcry," and discredit the IARC as an organization with a history of "questionable and politically charged rulings."

A storm of indignation did in fact break out after the IARC vote and the organization's funding was called into question. As recently as June, it was falsely reported that a member of the IARC had withheld information.

Monsanto denies the accusation that it sought to exert influence on the research. But the company had no comment on the other allegations. Several questions remain unanswered. Why doesn't Monsanto publish the results of its own research? And why doesn't the company simply pay for the Séralini study to be independently carried out a second time, which could dispel all doubts?

A Future in Doubt for Roundup

"Monsanto would do everything possible to protect its product, Roundup," says Daniel Boese of the Avaaz civic organization. The company deceived consumers and influenced expert opinions for years, he explains. According to Boese, Monsanto "destroys scientific safety mechanisms that the public actually relies on," and its lobbying influence is enormous. For instance, portions of the BfR's glyphosate report are taken from documents from the Glyphosate Task Force, a Monsanto-led industry association. The BfR rejects the accusation of plagiarism.

Europe's politicians ought to take a closer look at the Monsanto papers before authorizing glyphosate for another 10 years. Italy, Austria and France already plan to vote against the extension. German Chancellor Angela Merkel hasn't yet made up her mind.

"We will do our utmost to ensure that you can continue to use this substance where necessary," she told farmers at the German Farmers' Day event in June. But Merkel could find it difficult to keep this promise in a possible coalition government with the pro-environment Greens.

In any case, Europe's farmers would be well advised to consider the fate of Jack McCall, whose widow Teri is one of the plaintiffs in the United States. The California farmer had sprayed Roundup in his orchards for decades, where he was often accompanied by a loyal companion: his dog Duke. Duke died of lymphoma. McCall died of non-Hodgkin lymphoma a few years later. 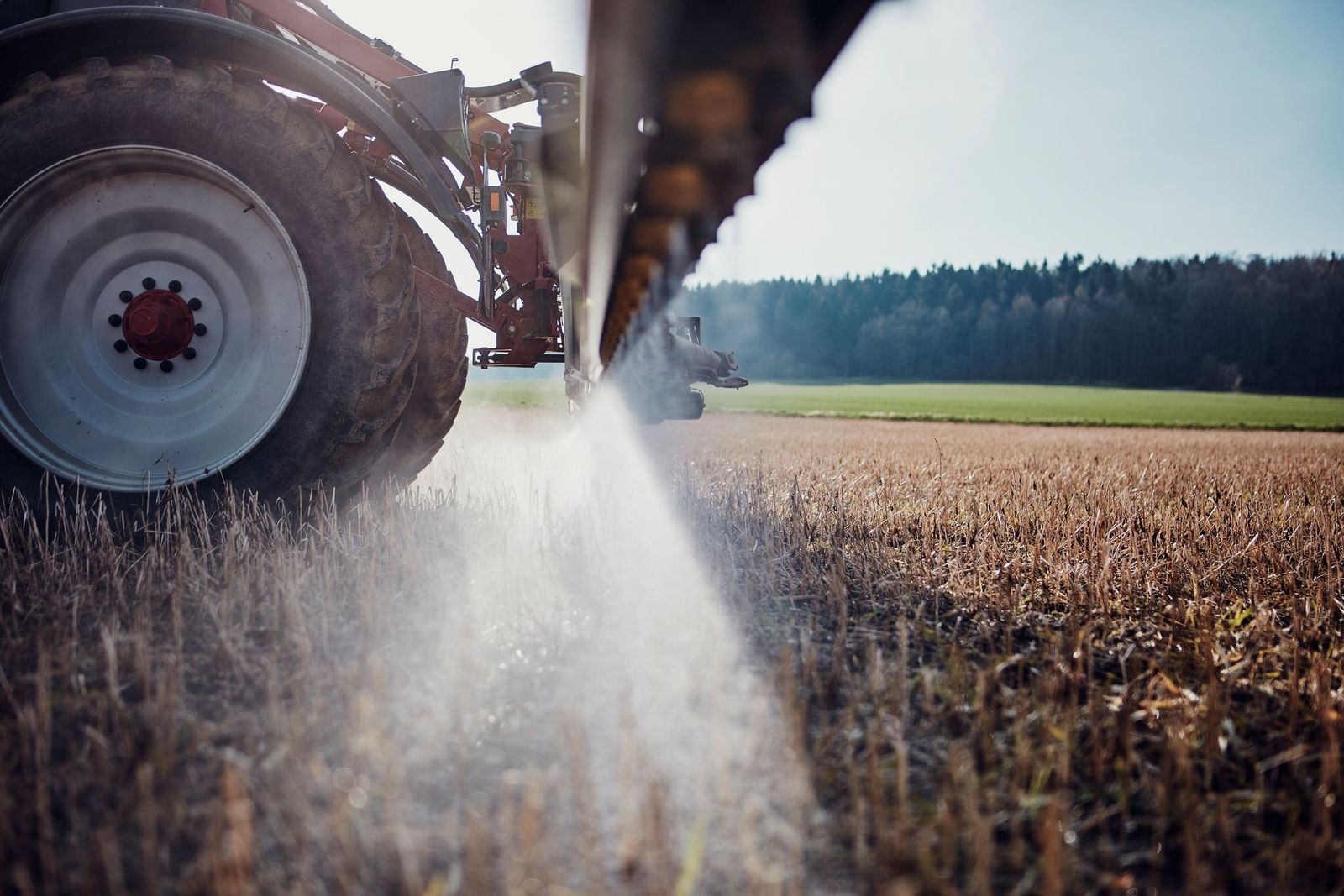 The trove of internal documents and emails reveals, on one hand, the lack of research conducted by the company on whether one of its signature chemicals, glyphosate, which is used in its herbicide Roundup, is carcinogenic. It also organized a concerted effort to undermine research that concluded that it did cause cancer. 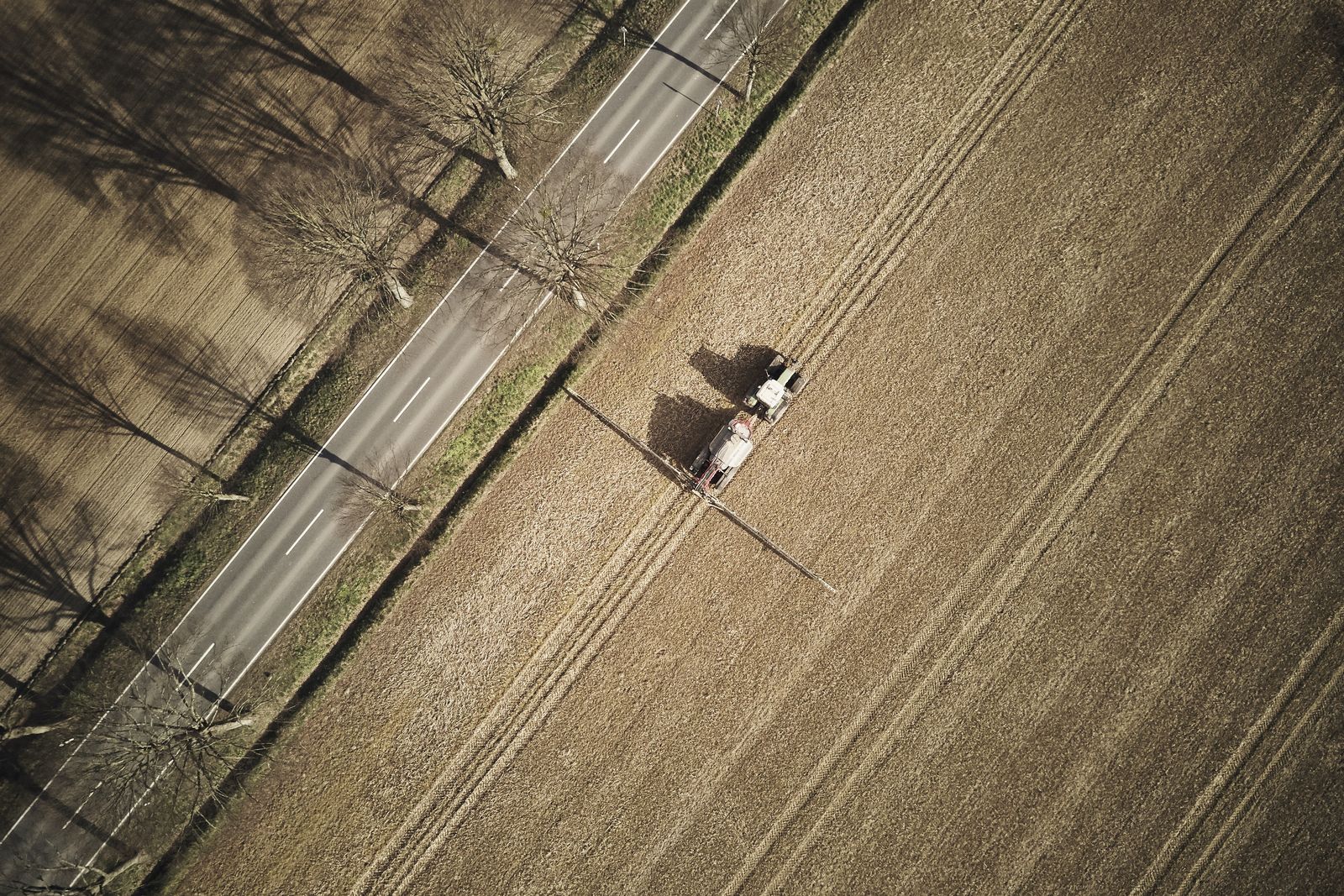 Around 2,000 plaintiffs are taking part in a class-action lawsuit in the United States. They claim that Roundup has caused non-Hodgkin's lymphoma, a form of lymph node cancer, in them or their relatives. 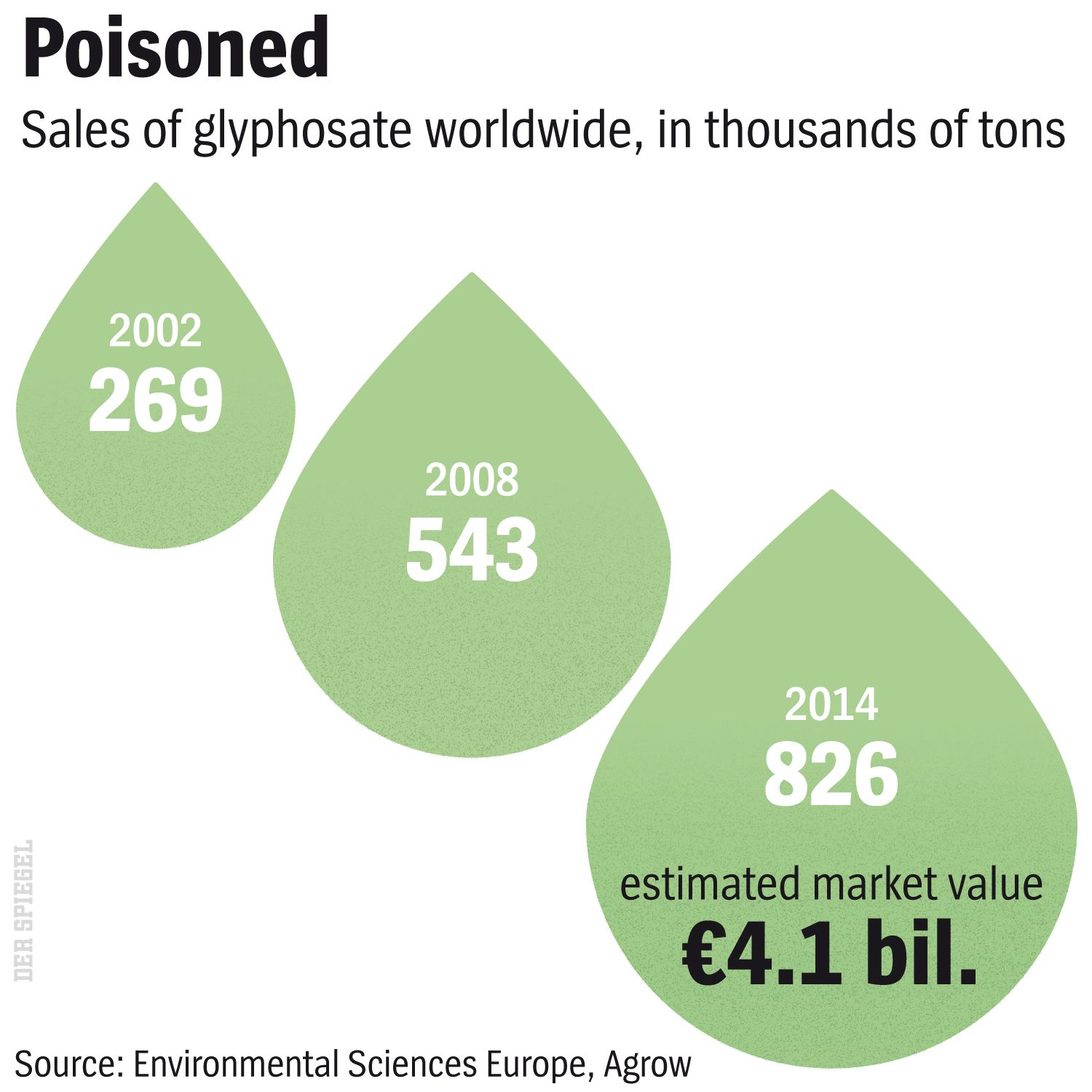