"I was told all the time that if you just remain silent no one will harm you," 22-year-old atheist Moroccan blogger Kacem El Ghazzali says. "Of course I know that. But I was not made for that."

Indeed, he wasn't. An act as simple as professing one's religious disbelief is one that most people in the West take for granted. But in Morocco, Ghazzali's admission of his lack of faith led to death threats.

Ghazzali's problems began soon after he started an anonymous blog where he wrote about his atheism. Though Morocco is often recognized as being one of the most "moderate" of Muslim countries in terms of religiously influenced laws and customs, Islam is the official state religion, and attempting to convert a Muslim is illegal. According to Article 220 of the country's penal code, it's a crime that includes "anyone who employs incitements to shake the faith of a Muslim or to convert him to another religion."

It was within this restrictive environment that Ghazzali started receiving threats. Although he had blogged anonymously, his taunters eventually tracked him down through his Internet connection. "We can tolerate an atheist but not an atheist activist," he was told. Yet Ghazzali remained unbowed, and when the Arabic language version of the international news network France 24 asked to interview him about the role the Internet was playing in connecting atheists across the Muslim world, Ghazzali agreed. He was still in high school at the time.

No longer anonymous, Ghazzali had now gained infamy thanks to the television appearance. Four days after appearing on France 24, Ghazzali claims that the principal of his school accused him of working for a "foreign agenda," alleged that he had violated Article 220, and physically assaulted him. Students even threw rocks at the blogger. The imam in his village of Bouderbala denounced him from the pulpit, and his extended family stopped talking to him.

Afraid to show his face in public, Ghazzali started living underground, moving from one friend's house to the next, all across the country. He received texts with death threats on his mobile phone. And one public death threat posted on a website showed a group of masked men with the promise, "Soon you will be slain like a sheep."

Realizing that his life might be in danger, he decided it was time to leave the country. Eventually, he made his way to the Swiss Embassy in Rabat, where a local Moroccan staff member initially told him to go away. Ghazzali demanded to see a Swiss diplomat, who arranged a meeting with the ambassador. After a four-hour interview, he was granted a visa. That happened two years ago, and he has been living in Switzerland ever since.

Last month, Ghazzali told his story at the Geneva Summit for Human Rights and Democracy, an annual conference hosted by the organization UN Watch, which monitors the world body to ensure that it lives up to its lofty principles. Standing alongside individuals persecuted by authoritarian regimes, Ghazzali was exhilarated to be among fellow dissidents. It also doesn't hurt that he's bursting with charisma. Tall and with long hair, he is swarmed by groups of young women who come up to him after his speech to profess their fandom.

Though Morocco, ruled by the secular King Mohammed VI, has remained relatively stable amid the upheaval of the Arab Spring, Ghazzali says that the country's Islamists have been emboldened by the strides their co-religionists have made across the region. He says he is skeptical that the revolutions of North Africa will lead to more democracy and pluralism, never mind greater respect for the rights of women, religious minorities or non-believers like himself.

'I Was Never Able to Believe'

An autodidact, Ghazzali came to his atheism through a circuitous route. He grew up in a religious household, with parents who prayed five times a day and fasted during Ramadan. Even from the age of 7, however, he was skeptical of his family's faith. "I was never able to believe," he says. "I had this struggle to believe. I had to convince myself to believe." Ghazzali's uncle, a communist, started giving him books which explained that "the challenges to the world are not from faith or religion, but from the economy." This pushed him to start reading more science, and soon he was onto the works of famous atheists like Richard Dawkins and Christopher Hitchens, as well as the secular Jewish philosopher Baruch Spinoza.

Influenced by the treatises his uncle gave him, Ghazzali went through a communist phase, laughing as he recounts the Che Guevara t-shirt he used to wear, his belief that "America is Satan," and the time he protested former Secretary of State Condoleeza Rice's visit to Morocco. But Ghazzali soon came to the realization that communism is just as dogmatic a set of beliefs as Islamism. "When I was a communist, I felt like I was in Koranic school," he says. Although he acknowledges the important role that communism, as a secular ideology, played for him as a gateway to reading more about science, economics and history, it's a phase he has since grown out of.

Today, Ghazzali is based in Zurich, where he spends most of his time organizing and writing. He is vice president of a small NGO called the Forum for Democracy and Human Rights, which hosts a lecture series on secularism in the Muslim world. Last year, he ran a successful campaign to pressure the Swiss government to deny entry to an extremist Saudi cleric, Mohamed Al Arifi, who is shown in a YouTube video allegedly making misognystic and anti-Semitic statements.

Hopes for a Return Home

For his part, Ghazzali hopes to be able to return to his native country one day, "but to the Morocco I am working for that could host me and my freedom, and not the one that takes away my individual liberties."

Though Ghazzali says he is happy to be living in Switzerland where he can express himself freely, separation from Morocco has been personally painful. His relationship with his parents is strained as well. "If they continue to insist on my belief, then they will lose me," he says flatly. After a long period of not communicating, today they only "talk about food, the weather," he says. "We don't get into what I'm doing here. I haven't seen them and I don't know when I will again." As an only child, he says his mother misses him tremendously.

On his Facebook page, which has nearly 20,000 "likes," Ghazzali links to an article which a Moroccan magazine recently published about him, illustrated with a photo of Ghazzali drinking a can of beer. Ever the optimist, Ghazzali takes the attack in stride.

"This Moroccan magazine did not find any picture to publish with its reportage except this one where I am drinking a peaceful beer with a peaceful friend!" he wrote. "Cheers." 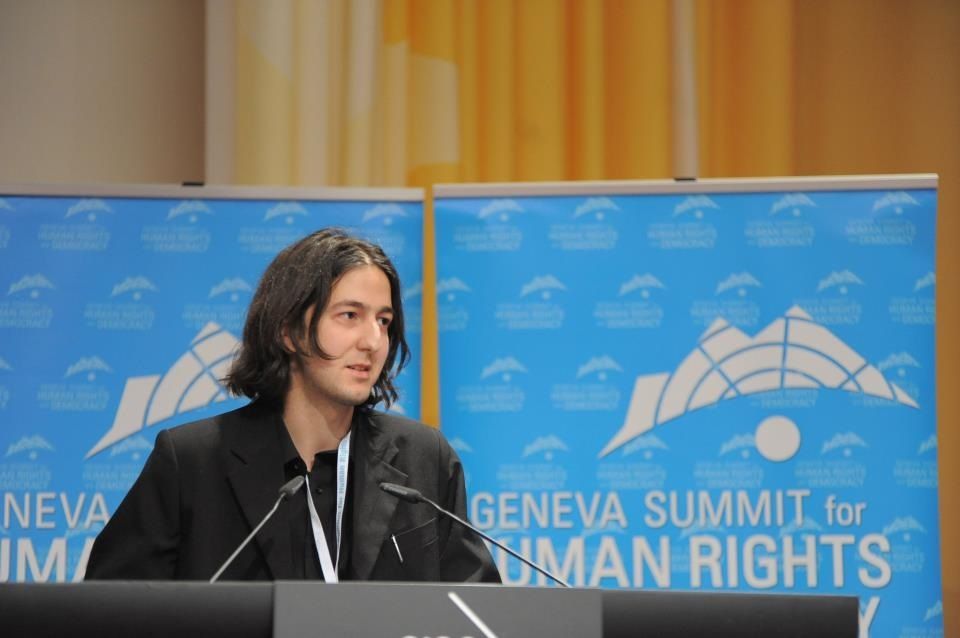