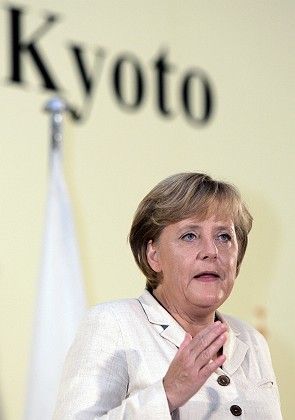 German Chancellor Angela Merkel was back in Kyoto after 10 years to campaign for action on climate change.

Ten years ago, Angela Merkel was in Kyoto hammering out the Kyoto Protocol as Germany's environment minister. Now she is back in the Japanese city as German chancellor, trying to get Asia on board for the next stage of the fight against global warming.

Speaking in Kyoto on Friday, the last day of her week-long Asia trip, Merkel said that although negotiations to reach a successor treaty to the Kyoto Protocol would be tough, there was no way to skirt around them. "If we do nothing, then we will have to reckon on significant changes to our climate," she said.

She also said that the European Union and Japan would "have their hands full" to meet their obligations agreed under the 1997 Kyoto Protocol, which is aimed at reducing greenhouse gas emissions. She warned that when the Kyoto Protocol expires in 2012, developing countries would ask the industrialized countries that signed it whether they had met the treaty's goals. Some, including EU members such as Spain, Portugal and Greece, would be hard-pressed to answer in the affirmative, she said.

The EU committed itself in the protocol to reduce its greenhouse gas emissions by 8 percent compared to 1990 levels by 2012. However it has only managed a 2 percent reduction until now. Japan's emissions have actually increased by 18 percent, despite its commitment to a 6-percent cut.

Merkel also repeated her compromise offer to newly industrialized countries which she made in a speech in Tokyo on Thursday. According to her proposal, developing countries such as India and China should be allowed to increase their per-capita emissions of greenhouse gases, but only until they reach the same level as the (theoretically) constantly sinking emissions of industrialized countries. "This point can not be exceeded," she stressed.

According to the German delegation, Merkel proposed the same model in Beijing on Monday, but the Chinese were skeptical. 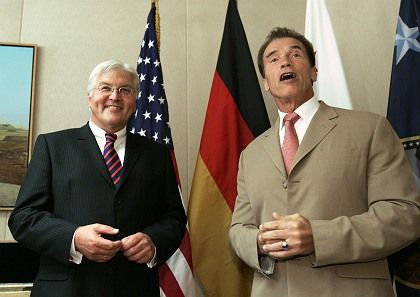 Merkel also called Thursday for the US to support a global climate deal. "If we can't find a regulatory regime that is accepted by the USA, then China and India will never agree to reduction targets," she said.

The new per-capita proposal is seen as a way of getting developing countries on board in the fight against climate change. Until now, industrializing giants like India and China have been skeptical about signing up to the West's efforts to combat climate change, arguing that they should be allowed to develop their economies -- with the concomitant pollution -- just as now-industrialized countries did in the past. China and India do not have any emissions goals under the Kyoto Protocol.

Although China is believed to have overtaken the US this year as the world's largest greenhouse gas emitter, per-capita greenhouse gas emissions in developing countries are still far below those in the West. According to figures from the German government, the US emits 20 tons of carbon dioxide per capita per year while Germany emits 11 tons. China, in contrast, only emits 3.5 tons per person. Merkel's long-term goal is for every person on the planet to emit the same level of CO2.

The United Nations is holding a major meeting on climate change in December on the Indonesian island of Bali. It is hoped delegates will agree to launch talks on a new climate agreement to replace the Kyoto Protocol, which runs out in 2012. Negotiatiors are hoping to hammer out a successor treaty by 2009, and Japan, which hosts the 2008 G-8 summit, will play a key role in the process.

Merkel, who was named the most powerful woman in the world by the US magazine Forbes Thursday, has made fighting climate change one of her foreign policy priorities. She recently made a high-profile trip to Greenland to see the effects of global warming at first hand, and earlier this year she got the leading industrialized countries to agree to "seriously consider" far-reaching emissions cuts at the G-8 summit in Germany.

Meanwhile as part of Germany's global climate change campaign, German Foreign Minister Frank-Walter Steinmeier was in California to meet with Governor Arnold Schwarzenegger. The two politicians pledged to harmonize their governments' efforts to fight climate change. "Let us build together a coalition of the willing," Steinmeier said in a speech on Thursday evening in San Francisco.

"I hope that we can do many things together," Schwarzenegger said. He and Steinmeier called for measures to link together the emissions trading system in Europe with corresponding initiatives in some US states. California is leading efforts to introduce emissions trading in the US.