Ban Ki-moon had been planning his trip to Norway for a long time, which made it all the more galling that just before the United Nations secretary-general arrived, newspapers published a leaked document in which none other than the Norwegian ambassador to the UN deemed Ban as weak, ineffective and lacking in charisma.

A diplomatic visit to Norway is usually one of the more pleasant outings for the UN leader. The country is one of the international organization's founding members and a big supporter as well, revering the secretary-general almost like a king. 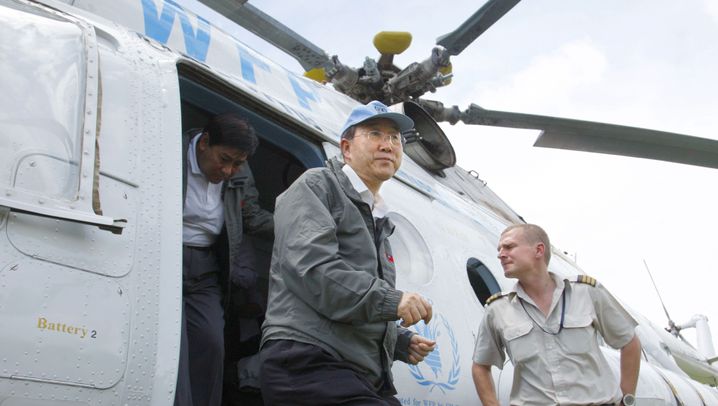 Photo Gallery: All Pleasantries And No Action?

This time, however, there were 40 journalists waiting for Ban at the Norwegian foreign ministry, hoping to find out how the UN secretary general would react to such an unambiguous insult.

The Norwegian foreign minister introduced his guest, then opened the floor for questions. They came fast and furious: "You've been accused of being spineless and lacking charisma. What do you say to that, Mr. Secretary General?"

Ban is notorious for his mask of Confucian politeness, but perhaps this time he would finally show a little passion, express a real emotion. Would he answer? Would he defend himself?

Ban paused. Of course the criticism affected him -- who wouldn't be affected by such words? But the secretary-general smiled and changed the subject, calling Norway an essential member of the United Nations, one he can always rely on. Those present in the room exchanged despairing glances. Once again they were left with nothing to hold onto -- no quotations, no ideas, only pleasantries.

Ban, a South Korean diplomat, has been UN secretary general for nearly three years. He is the first Asian since 1971 to hold the post -- a kind of world president, if you will -- yet he remains an enigma.

Supporters are quick to point to Ban's background, the quieter Asian culture so different from brash Western individualism, yet media in the Far East consider him a bland character too. Ban himself likes to relate that back home he's long been known as a "slippery eel," because it's impossible to hold onto anything he says. "I'm known as the invisible man," Ban declares, as if that fact might yet offer up some kind of advantage one day.

The international community held out the same hope for a long time. Had the world underestimated Ban, some wondered? Had he actually advanced the UN further than was apparent at first glance? But the longer the man stays in office, the longer the list of his missteps and miscalculations grows.

First he spoke out positively on the death penalty, something his own organization formally stands against. Then he praised former US President George W. Bush's war in Iraq. He traveled to Burma and Sudan, courting those countries' dubious leaders, but returned home without any tangible success. Ban has failed at the regional conflicts where his predecessor succeeded. Which leaves him meta-topics such as climate change. But at this point, hardly anyone has patience left for Ban.

Jacob Heilbrunn, a commentator for the respected American journal Foreign Policy, called Ban "the world's most dangerous Korean." The moniker is a terrible insult, since by rights it belongs to Kim Jong Il, North Korea's erratic dictator. But it's also a gauge of the disappointment currently reigning in the United States. Heilbrunn fears the UN is rapidly becoming irrelevant under Ban's stewardship. Ban's sole achievement is having attained his post, Heilbrunn claims, calling the secretary-general a "nowhere man."

More than 70 heads of state, including US President Barack Obama, announced plans to attend the global climate change conference in Copenhagen, which continues through next week in 12 straight days of negotiations. It's a conference of superlatives that simply can't be allowed to end without producing results. That would certainly spell disaster for Ban -- if the Copenhagen conference were to fail, it would be the conclusive piece of evidence for claims that the current secretary-general is unable to get the international community to solve its shared problems.

Back in his student days at Harvard University, Ban's standard joke was that he was "JFK" -- "just from Korea." Now he likes to quip, "My name is Ban, not James Ban." But it will take more than jokes to reverse the sentiment against him.

Kofi Annan, Ban's predecessor, was known as the "secular pope" because he took a stand for the idea of a better world, for development aid, peacekeeping missions and the fight for human rights. For many, the secretary-general post embodied hope and the utopian idea of a better life. Ban lacks that aura, although John Bolton, former ambassador to the UN under President George W. Bush, magnanimously gives Ban an "A" for effort.

A secretary-general is a politician who lives from symbolism and grand gestures. He has no great constitutionally invested power, but carries a moral authority instead. James Traub, Kofi Annan's biographer, wrote, "to become secretary-general, you have to appear harmless. But once you are secretary-general, you can test the limits of your office." It's necessary to stand out in order to be heard, but Ban has never in all his life wanted to stand out. He has done his job, but never tried to define that job himself.

Ban has always put work ahead of his private life. "I regret, looking back at my life, that I have not been able to cultivate any extracurricular activities," the Korean diplomat admits. His only hobby is golf, but even there he no longer finds the time, and has played less than a dozen times in the last three years. He also has a family -- a wife and three children -- but they too take the backseat to his work, Ban says.

His life has always been closely tied to UN, which sent soldiers into the Korean War in the early 1950s. Ban was six years old when the war began and his family was forced to flee, and he became well acquainted with hardship and hunger during the three years of fighting. He also remembers the Americans stationed in his hometown as having been friendly, handing out cookies, chewing gum and chocolate.

Ban traveled to the United States for the first time in 1962, as the prize for winning an English language writing competition. There he met John F. Kennedy and spent eight days in San Francisco living with the Pattersons, a typical American family. Even then, Ban demonstrated a knack for diplomacy -- his host mother was going to cook rice but Ban, much to her delight, asked for a hamburger instead.

By the time he was nominated for the UN secretary-general post in 2006, Ban had spent 35 years as a diplomat, ambassador, security advisor, and, most recently, as foreign minister under then-President Roh Moo Hyun. Only once did his career falter, when Ban committed perhaps his single greatest tactical blunder, praising the Anti-Ballistic Missile Treaty in a letter to Russia precisely at a time when the United States wanted to exit the treaty. Ban was fired to avoid incurring anger from the US. The diplomat found himself out of work, but the dry spell didn't last long -- he became foreign minister soon after, and six years later he was UN secretary-general.

The last Asian to hold the post before Ban was Sithu U Thant from Burma. Thant left office in 1971, succeeded by Kurt Waldheim from Austria, Javier Pérez de Cuéllar from Peru, and then two Africans -- Boutros Boutros-Ghali from Egypt and Kofi Annan from Ghana. The election of an Asian this time was a given.

Ban emerged as the front-runner largely thanks to the United States, which was looking for an especially bland candidate after knocking heads so often with Kofi Annan over the Iraq war. The Washington Times, a conservative daily newspaper critical of the UN, described many people's ideal candidate as someone who would be "a decaffeinated Kofi Annan." Seen from that perspective, model student Ban was the perfect candidate.

Many heads of states needed a little time to get straight who the new UN leader was. On a visit to Jerusalem, then Prime Minister Ehud Olmert called him not Secretary-General Ban but "Secretary Moon," while Lebanese Prime Minister Fouad Siniora in Beirut even greeted him as "Mr. Annan." A survey this year revealed 81 percent of Americans still don't know who he is.

By March 2008, Ban had already been on the job over a year, but most UN employees were still figuring out how to properly address their boss. They mixed up his first and last names, calling him Mr. Ki-Moon or Mr. Moon. As the confusion showed no sign of abating, the secretary-general's chief of staff sent a letter to all UN executives concerning a "matter of come delicacy," calling for more "clarity and accuracy" when addressing the head of the world body. He recommended that employees capitalize the name "Ban" to draw more attention to its status as surname, for example in "Secretary-General BAN." The letter, first published in New York Magazine, also added mention that the name is pronounced like "Autobahn."

Ban puts endless hours into his job, but he continues to be everywhere and yet not quite anywhere. He traveled almost ceaselessly as South Korea's foreign minister as well, managing to visit 111 countries and attend 374 meetings with his counterparts abroad in his mere two years and 10 months in office. The diplomat proudly calculates he has traveled almost a million kilometers in his second year in office alone.

Ban undertook an Arctic journey this September, visiting Norway's Svalbard Archipelago. It was a true adventure, complete with a helicopter that had to turn back because of storm conditions and a night spent on an icebreaker ship, in which he was kept awake by the din of cracking ice. When Ban talks about the trip, however, he tells it purely in the jargon of climate experts, everything expressed in centimeters, degrees, liters, and kilograms, as if the whole experience could be described simply as a sum of its component parts, all mathematics and no emotion.

It's evidently the secretary-general's way of rendering life comprehensible and calculable, as well-ordered as graph paper. In the end, however, nothing sticks from the experience. There's no clear picture, just a mass of details.

There was a moment, however, when the secretary-general stood on top of Svalbard's Zeppelin Mountain. A small red lift had brought him to the peak, and now all he had to do was walk to the observation platform with the best view.

Ban's gaze fell for the first time down toward the valley. Startled, he glanced around for his wife, whispering to her that she should stay behind, this wouldn't be her kind of thing.

The path from the lift station to the observation point wasn't a dangerous one, and only a distance of about 10 meters (33 feet). But a head for heights was certainly necessary, since the view from Zeppelin Mountain drops away for half a kilometer (0.3 miles) before reaching the small settlement of Ny-Alesund below and the valleys where the dying glaciers lie. It could have been a great photo-op -- a courageous Ban high above a melting river of ice. But he was overcome by vertigo.

Ban ascended the plateau as if it were a capsizing ship, his upper body bent forward. He was wearing professional weatherproof clothing, the same as the scientists wear. This was how the world should see him, as an environmental savior and fighter for a better climate.

Not knowing quite what to say once he reached the platform, Ban repeated the words "alarming, alarming", his arms flailing helplessly. He clearly lacked the strength for a grand gesture. There was a long silence. Then one fellow traveler gathered up the nerve to ask if the man needed any help on his lonely post -- "Mr. Secretary-General, everything okay up there?"

Translated from the German by Ella Ornstein
Zurück zum Artikel
5 Bilder Photo Gallery: All Pleasantries And No Action?